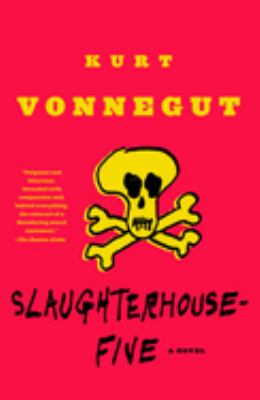 Billy Pilgrim is a World War 2 veteran that has come unstuck from time. He basically re-lives all parts of his life at random. He’s re-lived everything from his wedding day to the firebombing of Dresden, one of the largest air raids during WW2, killing about 130,000 people. Not only has Billy come unstuck from time, but he is also kidnapped by aliens, Tralfamadorians, whose understanding of time is beyond human understanding.

Although this book was kind of hard to follow, the rapid transitioning from WW2 to Tralfamadore was almost dizzying, I liked it. This is my first Kurt Vonnegut novel and it has a certain charm to it. Vonnegut quietly inserts himself in random scenes, reminding you that this novel is somewhat autobiographical. The novel is written with a kind of dry cynicism and its treatment of death is clinical (each time death is mentioned the only commentary is, “So it goes”), which is the only way the author can write about the horrors of Dresden without overwhelming his reader.

The plot itself was a little odd. The combination of WW2, alien abductions, and an odd form of time travel, don’t seem to go together at first thought, but Vonnegut managed it. He somehow manipulated his story and writing in a way that combined three very different concepts (each of which could make their own book) into a 200 page novel that worked flawlessly.

The writing was amazing. There are so many tragedies that go down in this novel, that each one can only be given a paragraph to a page each. The novel was written to show the horror of Dresden, but not to overwhelm the reader with the tragedies that went down. It’s odd plot distracted from the horrors enough so that the reader could continue to read, but did not lessen its main idea.

Overall I recommend it to anybody who’s looking for a thought provoking novel, but not anyone who can’t keep up with abrupt transitioning. 4 stars. –Kara, teen reviewer

Find the book in our library:  Slaughterhouse Five