This Sunday, May 14 is Mother’s Day when we celebrate all the amazing mothers and grandmothers in our lives. Try one of these great stories of mothers from all walks of life and their relationships with their children and with motherhood. Pick out one of these recommended reads or a favorite of your own to read with your mom or grandmother!

Are You My Mother? by Alison Bechdel

Alison Bechdel’s Fun Home was a pop culture and literary phenomenon. Now, a second thrilling tale of filial sleuthery, this time about her mother: voracious reader, music lover, passionate amateur actor. Also a woman, unhappily married to a closeted gay man, whose artistic aspirations simmered under the surface of Bechdel’s childhood . . . and who stopped touching or kissing her daughter good night, forever, when she was seven. Poignantly, hilariously, Bechdel embarks on a quest for answers concerning the mother-daughter gulf. It’s a richly layered search that leads readers from the fascinating life and work of the iconic twentieth-century psychoanalyst Donald Winnicott, to one explosively illuminating Dr. Seuss illustration, to Bechdel’s own (serially monogamous) adult love life. And, finally, back to Mother—to a truce, fragile and real-time, that will move and astonish all adult children of gifted mothers.

To five-year-old-Jack, Room is the world. . . . It’s where he was born, it’s where he and his Ma eat and sleep and play and learn. At night, his Ma shuts him safely in the wardrobe, where he is meant to be asleep when Old Nick visits.

Room is home to Jack, but to Ma it’s the prison where she has been held for seven years. Through her fierce love for her son, she has created a life for him in this eleven-by-eleven-foot space. But with Jack’s curiosity building alongside her own desperation, she knows that Room cannot contain either much longer.

Room is a tale at once shocking, riveting, exhilarating–a story of unconquerable love in harrowing circumstances, and of the diamond-hard bond between a mother and her child.

Thirty acclaimed writers share their personal birth stories–the extraordinary, the ordinary, the terrifying, the sublime, the profane It’s an elemental, almost animalistic urge–the expectant mother’s hunger for birth narratives. Bookstores are filled with month-by-month pregnancy manuals, but the shelves are virtually empty of artful, entertaining, unvarnished accounts of labor and delivery–the stories that new mothers need most. Here is a book that transcends the limits of how-to guides and honors the act of childbirth in the twenty-first century. Eleanor Henderson and Anna Solomon have gathered true birth stories by women who have made self-expression their business, including Cheryl Strayed, Julia Glass, Lauren Groff, Dani Shapiro, and many other luminaries. In Labor Day, you’ll read about women determined to give birth naturally and others begging for epidurals; women who pushed for hours and women whose labors were over practically before they’d started; women giving birth to twins and to ten-pound babies. These women give birth in the hospital, at home, in bathtubs, and, yes, even in the car. Some revel in labor, some fear labor, some feel defeated by labor, some are fulfilled by it–and all are amazed by it. You will laugh, weep, squirm, perhaps groan in recognition, and undoubtedly gasp with surprise.

Listen to Your Mother: What She Said Then, What We’re Saying Now edited by Ann Imig

Listen to Your Mother is a fantastic awakening of why our mothers are important, taking readers on a journey through motherhood in all of its complexity, diversity, and humor. Based on the sensational national performance movement, Listen to Your Mother showcases the experiences of ordinary people of all racial, gender, and age backgrounds, from every corner of the country. This collection of essays celebrates and validates what it means to be a mother today, with honesty and candor that is arrestingly stimulating and refreshing. The stories are raw, honest, poignant, and sometimes raunchy, ranging from adoption, assimilation to emptying nests; first-time motherhood, foster-parenting, to infertility; single-parenting, LGBTQ parenting, to special-needs parenting; step-mothering; never mothering, to surrogacy; and mothering through illness to mothering through unsolicited advice. Honest, funny, and heart-wrenching, these personal stories are the collective voice of mothers among us. Whether you are one, have one, or know one, Listen to Your Mother is an emotional whirlwind that is guaranteed to entertain, amuse, and enlighten.

Operating Instructions: A Journal of My Son’s First Year by Anne Lamott

It’s not like she’s the only woman to ever have a baby. At thirty-five. On her own. But Anne Lamott makes it all fresh in her now-classic account of how she and her son and numerous friends and neighbors and some strangers survived and thrived in that all important first year. From finding out that her baby is a boy (and getting used to the idea) to finding out that her best friend and greatest supporter Pam will die of cancer (and not getting used to that idea), with a generous amount of wit and faith (but very little piousness), Lamott narrates the great and small events that make up a woman’s life. The Twelve Tribes of Hattie by Ayana Mathis

In 1923, fifteen-year-old Hattie Shepherd flees Georgia and settles in Philadelphia, hoping for a chance at a better life. Instead, she marries a man who will bring her nothing but disappointment and watches helplessly as her firstborn twins succumb to an illness a few pennies could have prevented. Hattie gives birth to nine more children whom she raises with grit and mettle and not an ounce of the tenderness they crave. She vows to prepare them for the calamitous difficulty they are sure to face in their later lives, to meet a world that will not love them, a world that will not be kind. Captured here in twelve luminous narrative threads, their lives tell the story of a mother’s monumental courage and the journey of a nation.

Beautiful and devastating, Ayana Mathis’s The Twelve Tribes of Hattie is wondrous from first to last—glorious, harrowing, unexpectedly uplifting, and blazing with life. An emotionally transfixing page-turner, a searing portrait of striving in the face of insurmountable adversity, an indelible encounter with the resilience of the human spirit and the driving force of the American dream. 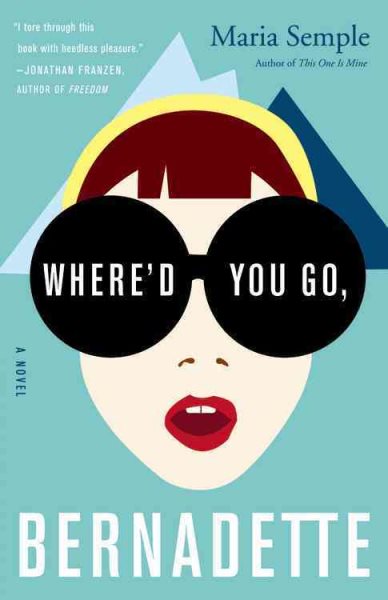 Bernadette Fox is notorious. To her Microsoft-guru husband, she’s a fearlessly opinionated partner; to fellow private-school mothers in Seattle, she’s a disgrace; to design mavens, she’s a revolutionary architect, and to 15-year-old Bee, she is a best friend and, simply, Mom.

Then Bernadette disappears. It began when Bee aced her report card and claimed her promised reward: a family trip to Antarctica. But Bernadette’s intensifying allergy to Seattle–and people in general–has made her so agoraphobic that a virtual assistant in India now runs her most basic errands. A trip to the end of the earth is problematic.

To find her mother, Bee compiles email messages, official documents, secret correspondence–creating a compulsively readable and touching novel about misplaced genius and a mother and daughter’s role in an absurd world. The Valley of Amazement by Amy Tan

Spanning more than forty years and two continents, The Valley of Amazement resurrects pivotal episodes in history: from the collapse of China’s last imperial dynasty, to the rise of the Republic, the explosive growth of lucrative foreign trade and anti-foreign sentiment, to the inner workings of courtesan houses and the lives of the foreign “Shanghailanders” living in the International Settlement, both erased by World War II.

A deeply evocative narrative about the profound connections between mothers and daughters, The Valley of Amazement returns readers to the compelling territory of Amy Tan’s The Joy Luck Club. With her characteristic insight and humor, she conjures a story of inherited trauma, desire and deception, and the power and stubbornness of love.