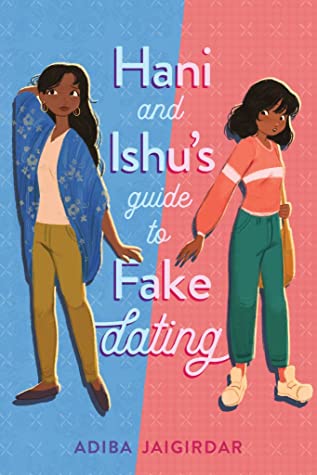 Hani and Ishu’s Guide to Fake Dating by Adiba Jaigirda

Popular girl Humaira “Hani” Khan and studious overachiever Ishita “Ishu” Dey could not be more different from one another, and yet the strangest movie-like circumstances cause their paths to cross. Hani is friendly and well-liked by the student body, but when she comes out to her friends as bisexual, they invalidate her identity, telling her that she can’t be bisexual because she’s only dated guys. Panicked, Hani tells them on impulse that she’s actually dating Ishu…who her friends don’t like at all. When Hani tells Ishu about her fake dating dilemma, Ishu agrees to help on one condition—that Hani will help her become more popular so that Ishu can become a viable Head Girl candidate and prove herself to her parents. However, as the plan goes into motion, the two Bengali girls start to feel things that were certainly not according to plan—and they’ll have to face all of the obstacles thrown in their way.

Hani and Ishu’s Guide to Fake Dating is a mostly lighthearted read that excellently  balances well utilized rom-com tropes with complex issues about families and society. With the eponymous “fake dating” trope and in some parts the “enemies to lovers” trope, avid readers of YA will find this a comfortable formulaic read, that is delightfully remixed. Several parts of the book felt painfully real to me as a person of color, such as how Hani’s friends exhibit toxic behavior by not caring about understanding the religion of Islam or how there is great diversity within different cultures and ethnic groups. Hani’s friends lump Hani and Ishu together even before they begin fake dating, as they are the only brown girls at their school. All of this reminded me of the  ignorance that is still witnessed from people at my high school today. Hani and Ishu both undergo superb character development regarding their connections with their friends and family, and I especially loved Hani’s relationship with her parents as well as how Ishu grew closer to her sister over time. Hani and Ishu’s Guide to Fake Dating informs the reader of important issues of the current age, while also delivering an adorable classic fake dating love story.