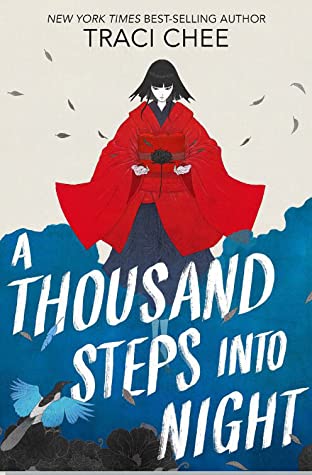 A Thousand Steps into Night by Traci Chee

Otori Miuko is just a simple innkeeper’s daughter—average in every way, meant to be gentle and demure and bear fat, healthy sons for a future husband. The problem is, she isn’t gentle and demure—her loudness is her defining trait, and she has an unfortunate tendency to drop teacups and speak her mind. Her future seems dull and humdrum until one fateful day when she is kissed by a demon in the forest and cursed with a deadly touch. Suddenly, she’s cast out from her own home, the village where she’s lived for the past 17 years, with nowhere to go. With the help of a lighthearted magpie spirit, Miuko embarks on a journey to reverse the curse. Along the way, she encounters demons, spirits, and gods alike, and she finds herself more free than ever in her adventures as she learns about all the things she had been denied as a girl. Soon enough, Miuko must make a decision; should she return to her downtrodden village life or allow the curse to take her?

I loved the atmosphere of A Thousand Steps Into Night. It’s written in a style similar to a fairy tale, containing such gems as “…for it was during these times that demons attacked travelers for their unctuous, buttery livers, ghouls appeared in mirrors to steal human faces, and ghosts slipped from doorways to wring the necks of unsuspecting passersby underneath.” For me, this was the line that truly solidified the feel of the story within the first chapter. The worldbuilding is done quite well. The world of Awara seems to be based mainly on Japanese mythology, with the spirits of nature and the many malicious demons. The feminist underlayers of the story are prominant in Miuko’s character arc, which begins with her firm belief that a woman’s only role is to marry and have children. As she is exposed to the rest of the world, her worldview expands in quite a realistic way. A Thousand Steps Into Night is a beautiful read, with gorgeous prose and a well-thought-out message.