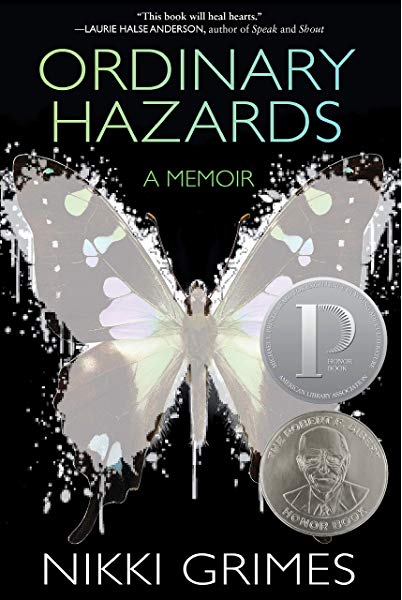 Ordinary Hazards is a memoir in verse. As the daughter of a paranoid schizophrenic mother and a struggling violinist father, Nikki Grimes spent her early years in and out of foster care, contending not only with poverty but with an abusive stepfather and the various gangs that menaced the streets around her. With her mother in and out of the psychiatric ward and her father often absent, Grimes turned to writing at an early age. (Reconstructed entries from her childhood journals are inserted throughout her memoir.) As she and her writing matured, Grimes continued to endure misfortunes, but with a newfound sense of how she would use her suffering as the foundation of her literary work.
Grimes’ childhood makes for harrowing and sobering reading, and it was inspiring to see her rise above her circumstances. However, if you seek a volume of great verse, I would suggest looking elsewhere. Much of Grimes’ poetry reads like prose, and might have been more effective as such. For example, this passage, “Mrs. Buchanan / took me to see / a man we’ll call Dr. Stern, / a psychologist we foster kids / were assigned to” (from “Statistics”) is prosaic in all but line breaks. Of course, some of the poems are enjoyable and display a touch of humor. For example, in “Grape Escapade”, Grimes writes, “My assignment clear: / pick grapes from the vine for jam. / No more, no less—right? / I confess, the grape taste-test / was strictly my own idea.” She also inserts this witty remark in the poem “Course Correction”: “My tenth-grade subjects / provided very little challenge / except for math, which I decided / was clearly the work of the devil.” Overall, I found this memoir informative and thought-provoking, and I recommend it for these characteristics.
3 stars.