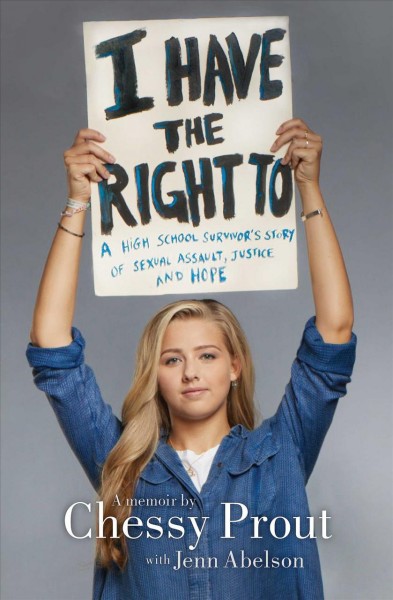 I Have the Right To: A High School Survivor’s Story of Sexual Assault, Justice, and Hope by Chessy Prout with Jenn Abelson

I Have the Right To: A High School Survivor’s Story of Sexual Assault, Justice, and Hope is the memoir of Chessy Prout, a student activist who was sexually assaulted at a prestigious New Hampshire boarding school. In this book, she chronicles her harrowing experience and the miserable aftermath, which included her being ostracized at school, trolled online, and subjected to nightmares and panic attacks. Against all odds, she persevered and turned her story into one of redemption and courage that will inspire girls everywhere. Prout testified courageously at the trial of her attacker, came into contact with other survivors, and launched the advocacy campaign #IHaveTheRightTo. In this memoir, she tells her story while simultaneously exposing the sordid culture of the venerable New England boarding school, St. Paul’s School, where her assault was the result of an annual contest of sexual conquest.
This book was written with bravery, honesty, and a steadfast commitment to truth, something Prout showed throughout her ordeal. She writes, “I was a survivor. My heart was held in God’s hands. He had given me strength in so many ways. No matter how weary I was, I would never lose the will to tell the TRUTH.” The book quotes numerous text messages and letters that were sent both before and after the attack. Written by the author, her accused rapist, friends, and the administration of St. Paul’s School, the varied exchanges enhance the narrative and shed light on many details of the story, including, and especially, the hypocrisy of the school.
I recommend this book. 3.5 stars.

Find this book in our catalog: I Have the Right To: A High School Survivor’s Story of Sexual Assault, Justice, and Hope