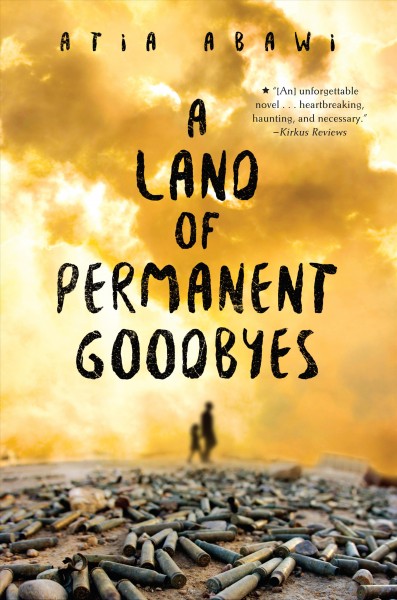 A Land of Permanent Goodbyes by Atia Abawi

In this harrowing, heartbreaking, and utterly necessary tale, Atia Abawi tells the story of Tareq, a Syrian teenager who is forced to flee his country after the destruction of his home and the consequent loss of several family members. When their apartment building is destroyed in a government airstrike, Tareq, his father Fayed, and his baby sister Susan (the only survivors of a formerly large family), travel first to ISIS-controlled Raqqa, where frequent executions are broadcast on screens and played on repeat, and heads mounted on spikes provide a grisly warning against running afoul of terrorist law. In Raqqa, Tareq unites with his cousin Musa and the two travel to Turkey and are later joined by Fayed and Susan. In the end, Tareq is forced to make the treacherous ocean crossing to Europe alone with Susan, witnessing deaths and experiencing grave danger, but also meeting people who give him hope and remind him of the inherent goodness that lies in many.
This book is narrated by Destiny, who both opens and closes the story, also popping into the novel every now and then with prescient observations on human nature. These observations vivify the narrative and help to illustrate the plight of refugees in general. The insight and counsel of Destiny, however, are only two of the many profound details in this story. The characters face not only death and danger, but manifold incidents of hostility and avarice. Smugglers charge exorbitant fees for passage to Greece, only to place the asylum seekers in flimsy, dangerously overstuffed dinghies. Moreover, Tareq is grateful that his faux life vest (he could not afford a legitimate one) is at least stuffed with foam when many are simply stuffed with paper. However, strengthened by the kindness of certain characters, namely his father, the selfless volunteers waiting on the Greek shore, and some fellow refugees, Tareq retains his goodness and integrity throughout the novel and is hopeful to the end.
I highly recommend this book – 5 stars.

Find this book in our catalog: A Land of Permanent Goodbyes