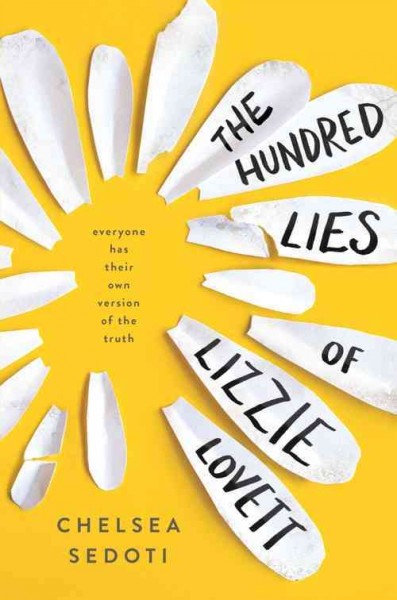 The Hundred Lies of Lizzie Lovett by Chelsea Sedoti

According to everyone in Griffin Mills, Lizzie Lovett is the perfect girl. You know that kind. The perky, blonde cheer captain whom everybody either loves, hates, or wants to be. She’s the girl who gets all the guys, but not all the guys get her. She’s the girl with a perfect name like Lizzie Lovett.
It turns out, however, that Lizzie Lovett isn’t as perfect as everyone thought she was. At age 22, she has disappeared during a camping trip with her Joy Division loving boyfriend, Lorenzo Calvetti. And everyone at school, whether they knew her or not, is talking about it. Why would Lizzie Lovett go camping? Why is she with that guy? According to our trusty narrator, Hawthorn Creely, the only reasonable explanation is that Lizzie is a werewolf.
This was only the first thing wrong with this book, but it was probably the most ridiculous. Out of all the reasons as to why she disappeared, this is the one that makes the most sense? A werewolf, a creature that even Hawthorn knows doesn’t exist? It took around 100 pages until she gave up on the idea. But, unfortunately, in the next half of the book, even more idiotic things came to light.
In fact, Chelsea Sedoti had way too many additional events that were either unnecessary or questionable. First, Hawthorn, who is seventeen, begins a relationship with a twenty-five-year-old — Lorenzo Calvetti, and no one bats an eye at it, not her mom, nor her brother, nor her dad. Second, Mychelle was a character reminiscent of Regina George and Mandy from Mean Girls 2. She was extremely unnecessary since the book was dramatic enough without her stereotypical drama queen act.

Chelsea Sedoti payed more attention to all these small things than how Lizzie Lovett actually died. Yes, we found out, but not because Hawthorn did anything, it was because of the police officer. This was the plot’s problem in and of itself.
But there were some structural problems, too. The story was written the way a twelve year old would write. It was tiresome, there was no character development whatsoever, and the author strayed away from what she was supposed to write about. It was stereotypical, unoriginal, and a total rip-off combination of too many teen soap operas.

My overall opinion of this book was that I hated it. It was a bad combination of Pretty Little Liars and Mean Girls. 2 / 5 stars.

Find this book in our catalog: The Hundred Lies of Lizzie Lovett