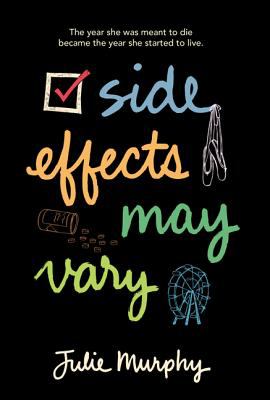 If it’s been a while since you’ve read The Fault in Our Stars by John Green, or seen the movie, but can still remember how much you loved Hazel and Gus, you might be ready for another cancer-plagued teen romance… but watch out, ’cause this one has a twist.

Like its title suggests, Julie Murphy’s debut novel, Side Effects May Vary, takes a look at some of the other side effects of being terminally ill that are not always written about, like anger, fear, frustration, and jealousy. Our protagonist, Alice, is NOT the graceful, kindhearted Hazel. She is bold. She is afraid. She is angry. She is conniving. She is willing to do whatever it takes to get revenge on everyone who has hurt her, and she knows she has limited time to do it. She enlists her previously estranged best friend Harvey to help her carry out her plots of vengeance. Sometimes her acts of revenge seem totally justified. Other times, they seem totally cruel. No matter what, you’ll be shocked by this girl’s audacity! Through it all, Alice’s doting friend Harvey is along for the ride, and she knows it, because he has been in love with her for as long as either of them can remember. She might even love him too. Love has always been scary for Alice, since she knows love can never really last, but that might not matter now, since she’s got cancer and she’s going to die… so she lets him think that she loves him too. She won’t be around long enough to regret it.

And then, the unthinkable happens. She goes into remission. She’s no longer going to die. Now she has to figure out what to do with herself, her anger, and the fact that she has created several monsters: a boyfriend she’s not really ready to devote herself to, and enemies who are sharpening their knives. Life may have gotten longer, but it’s also gotten a lot harder.

Alice is a very unreliable narrator, and you see that when you compare the sections she narrates with the sections narrated by Harvey. I personally did not like Alice very much. She is not a very nice person. But she is a realistic person, a flawed person, a selfish person. And I kept on reading to see what she would do about all the problems she’s created and how she would redeem herself.

Here’s why I’m still compelled to recommend this fine book: because it can be very limiting to always read about dying people who are “wise beyond their years” or who show us how to “dance like no one is watching” or how to love people “like they might die tomorrow.” That’s all great… But how fair is it, really, to REAL teens who may not have that superhuman maturity and are dealing with whacked-out hormones and mean high school cliques, while also dealing with their mortality? How fair is it to force cancer victims into the category of “sage” with so many sweet, smart cancer victim characters like Hazel Grace Lancaster? I think it’s about time a book like this came along, one which shows that a dying person’s last wish may not be for love or harmony–it might be for vengeance or public humiliation of one’s enemies–and that’s okay in a way, because everyone deals with things differently. Maybe we need more books about that difficult process.

I won’t say whether she grows up and redeems herself or not, or what happens between her and Harvey. But I will tell you I was rooting for Harvey to dump her and get another girlfriend for the whole entire book!!! She’s Just Not That Into You, Bro!!

So if you’re ready for a twist on the teen-with-cancer story, pick up Side Effects May Vary. You won’t be able to put it down! It probably won’t make you cry the way The Fault in Our Stars does. It made me more angry than anything, but anger can be a good sign too: it shows that the reader is at least strongly invested in the characters.

And if you’d rather read something that makes you cry, something about a kid who REALLY WAS an admirable sage, check out this amazing article about the real girl who inspired The Fault in Our Stars, including an entry from her diary before she passed away from cancer at age 16. I’m sure she would have liked John Green’s book, but I think she might have liked Julie Murphy’s, too.