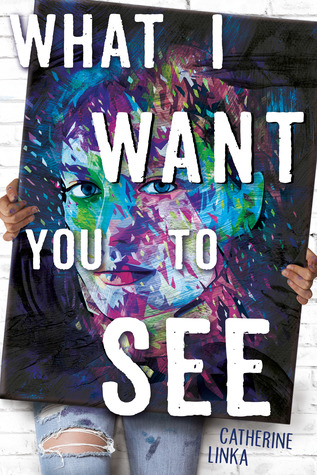 What I Want You To See By Catherine Linka

Winning a full-ride scholarship to California’s top art school previously seemed like a crazy, awesome, happily-ever-after for Sabine Reyes, but it’s not all it’s cracked up to be. The renowned professor Colin Krell, who she’d hoped to be mentored by, has turned out to be a merciless critic and seems to take pleasure in shooting down her best work warning her that she’ll lose her scholarship if she doesn’t improve. But when she meets a seasoned grad student named Adam, who shows her Krell’s unseen masterpiece, she finds in the painting the keys to her success. After all, she was instructed to copy a painting that she has a connection with…but what would he think of her copying a painting that hasn’t been seen by anyone except Krell and now herself? And how should she deal with accidentally becoming an accomplice in a crime so well-plotted that no one but her knows about?
While the book may turn away people in the beginning with the mildly cliched plot and slight unlike-ability of the protagonist, I advise to stick around for the meat of the story, where the real character development and realization of the mystery happens. Sabine herself undergoes some admirable character development, and throughout the story has thoughts and memories about herself and her current (and past) situation, which I actually thought to be a bit more enjoyable than the plot itself. Although, she’s not exactly the most…shall we say sharp character, which was disappointing.
I appreciated the light shed upon the homeless and most especially, the college students who are homeless in this book since that specific of a topic is not often tackled in literature. In fact, focusing on homeless college students and how society so often misjudges the homeless is surprisingly well portrayed. An awful fault of humankind is our tendency to judge upon sight, which features prominently in What I Want You To See. In fact, the title even alludes to that idea, since we as a collective whole all have that same little want in our minds—to be seen as someone powerful, or kind, or some other status-raising quality. It’s one of the many underlying ideas that lie within this book, and one of the qualities that save it from dropping into the realm of cliche fiction.
3.5 stars