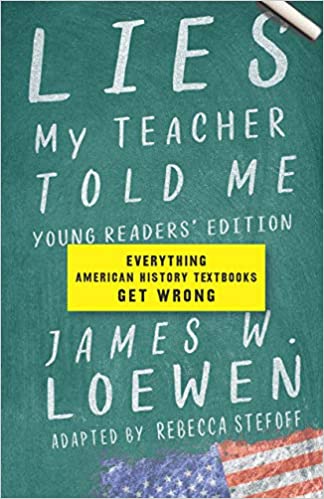 “In his novel 1984, English writer George Orwell said, ‘Who controls the present controls the past.’ He meant that those in power shape the way history is told, written—and taught,” writes sociologist James W. Loewen in Lies My Teacher Told Me. In this work, Loewen reveals the vital flaws in numerous, popular American History textbooks, and describes the impact these flaws have on students. Exploring history from the era of Columbus through the early 21st century, this book reveals historical facts and questions that have been buried beneath common textbook inaccuracies. Loewen explores broad eras and concepts such as the interactions between early European colonists and Native Americans, the prevalence of racism in American history, and the tendency of textbooks to glorify the government and obscure its historical errors. Loewen also examines how the portrayal of individuals in history, including Helen Keller, President Woodrow Wilson, and John Brown, can be skewed to disguise controversial ideas or maintain a long-held popular image.
I found this book interesting as a study. It was both sobering and thought-provoking. However, I found little in it that deviated sharply from what I have learned about U.S. history. It could be that topics such as the cruelty of Columbus and the influence of corporations on foreign policy are simply better known today than they used to be. In any case, if you are interested in a historical study at the moment, this is probably a good book for you; if you have never enjoyed history, perhaps this book will change your perception of it. Overall, while it may not be as shocking as it once was, the information in this book is important in the interest of exposing historical truths.
3.5 stars.