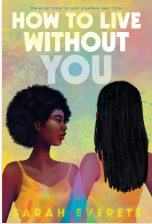 How to Live Without You by Sarah Everett

When Emmy’s older sister Rose goes missing, everyone dismisses it as another case of teenage rebellion, but Emmy thinks otherwise. How could her closest confidante just up and leave without even telling her? To find answers, Emmy flies back to her hometown, where she discovers that everything has changed in the 6 years since she left—and somehow, Rose is connected to all of it. Just what kind of a person is Rose, really?

On my first read of “How to Live Without You”, Emmy seemed annoying and impulsive, until I realized teenagers are not mature people, especially when under stress. While it’s true that distance and time play a role in why Emmy placed Rose on a high pedestal, she’s already 17 years old—how could she still be this naive? Then again, this naivete plays an integral role later in her character arc, so nonetheless, it works out. It turns out that Emmy is supposed to be a down-to-earth, messy teen who’s just really stressed out; she’s slightly exaggerated, but it enhances the reader’s self-awareness.

Unfortunately, many of the other characters aren’t as solidified as Emmy, which creates a noticeable dissonance whenever she interacts with anyone else. The plot of this book is somewhat predictable since it’s a traditional “family member goes missing and the protagonist finds out about their secret past” trope. However, it’s important to note that this book takes a deeper dive into said “secret past” and highlights important teen issues like mental health and relationships. “How to Live Without You” may be difficult to take seriously at first, but there are many significant lessons to be learned if you look just below the surface.