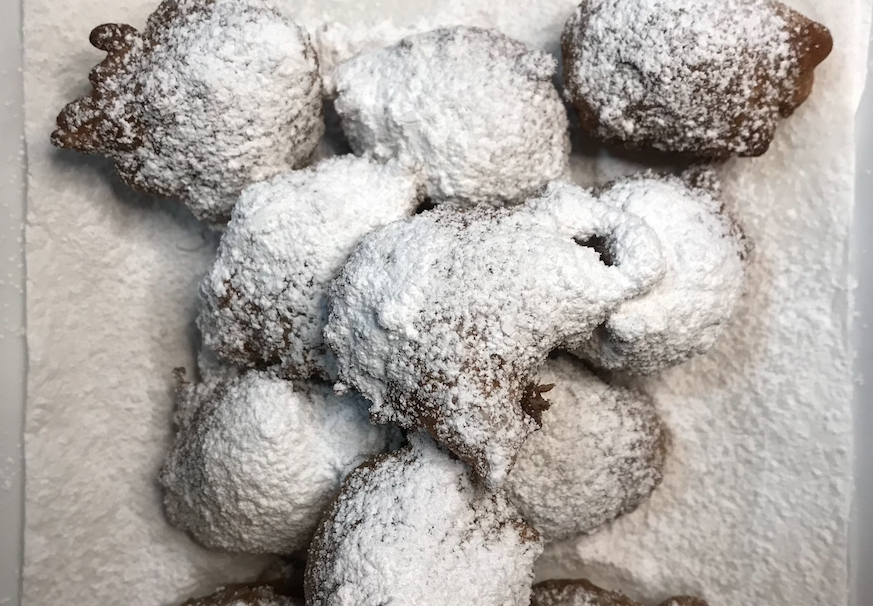 In celebration of Black History Month, we are making and learning about calas rice fritters.

Calas are similar to beignets in preparation and taste. They are usually made of leftover rice with sugary egg batter, then friend and dusted with powdered sugar. “Calas” is from the Nupe word ‘kárá’ meaning ‘fried cake’ (Nupe are people from west central Nigeria).

In the 1760s, when the Spanish took control of Louisiana from the French, they brought with them a legal instrument called a coartacion, which gave slaves the right to buy their freedom. For some enslaved black women in the city, selling calas was key to earning money for some of these purchases. They would purchase freedom for themselves and their families.

They usually sold calas on their day off — it was required by law at the time that slaves had a day off. Most had Sundays off, so after church, that’s the day most often you’d calas vendors out in the street, yelling in French ‘hot calas for sale’. More than 1,400 New Orleans slaves bought their freedom under Spanish rule. But it’s not clear just how many did so with calas money.

It’s important to note that, according to some African-American culinary historians, not all calas vendors were enslaved. And the ones who were slaves often sold them for their mistresses. If they were lucky, they were allowed to keep a portion of the money, or perhaps have it go towards their freedom. Free people of color were also very successful during this time, so some of the calas vendors could have been wealthy merchants.

In the 1800s, many African American women made their living selling calas and other street foods — even after Americans stopped the coartacion soon after the 1803 Louisiana Purchase.

In the 1900s, many calas vendors disappeared; in 1940, only one merchant remained. But calas still remains a popular treat at home among African Americans. The Old Coffeepot Restaurant, a French Quarter breakfast joint, has had calas on the menu for decades.

Since the 1990s through today, calas enthusiasts have been sharing the story of calas; it’s thanks to them that calas have risen in popularity. In the early 2000s, variations such as savory calas, arrived on the menu in America. In Africa today, women in the open-air markets would still be making calas.

In the early recipes for calas, yeast was added to the batter to make a sponge, then proofed overnight, giving it a rise. In this recipe, we are going to use baking powder as the rising agent instead.

Traditionally, calas was also fried in lard. We are going to use vegetable oil to fry.

Video caption:  In celebration of Black History Month, we are making and learning about calas rice fritters. Librarian Jane Gov teaches a live cooking lesson to teens. This is an edited video from the February 7, 2022 lesson. 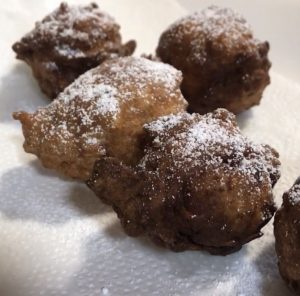 Once done, fluff rice and transfer to bowl and cool.

Set aside until rice is cooled.

In small or medium pot:

Add approx. 2 cups oil. You don’t need very much, just enough for most of the calas to fry.

If you have one, use a thermometer that can reach at least 400 degrees such as a fryer or candy thermometer, or you can do the “popcorn” or “wooden spoon” trick to determine the temperature of the oil.

Nearby, have ready a tray or plate with paper towels.

Nearby:  Strainer or slotted spoon.

Once rice is cooled…

Lightly beat the eggs with the vanilla extract, then add to the bowl with the sugar, cinnamon, salt, nutmeg, and baking powder.

Add 1 c flour and quickly incorporate; careful not to over beat

The batter should be thick enough to scoop, but not too thin that it dribbles.

Heat oil between 350 and 375 degrees. Test the temperature using a thermometer or use the popcorn or wooden spoon test [refer to the video at time ___]

Fry in small batches for 3-5 minutes.

Cover and refrigerate for up to 5 days to a week.

Or cover and freeze for up to 2 months.

If you’re going to use it soon, remove fried bits from the oil. Cool. Then cover the pot and leave in a cool, dry place.

If you’re not using the oil within the next week, and you need your pot back, this is how you can store your oil:

make sure it’s not “broken” ~ consistent over heating the oil will result in a oil separation (once the pot of oil starts to smoke, you have probably over-heated the oil)

not too discolored (if it’s orange, you should probably toss it). This amount of oil should be enough for one batch of calas.

strain the oil (use cheesecloth if you have it).

This project was supported in whole or in part by the U.S. Institute of Museum and Library Services under the provisions of the Library Services and Technology Act, administered in California by the State Librarian.