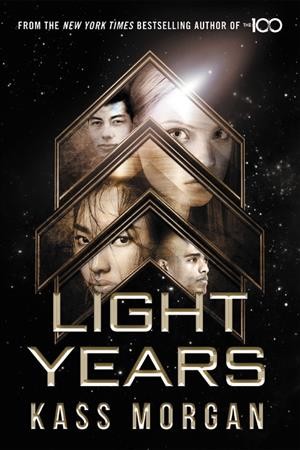 The book Light Years is told from the perspectives of Vesper, Cormak, Arran, and Orelia, all from different planets in the solar system. They are all accepted in to the Quatra Fleet Academy, the most prestigious school in the entire solar system, and are placed in the same squadron, each having different jobs in the group. Vesper is the pilot of the squadron after Cormak, a boy from Deva, becomes captain. Dreams crushed, she has to prove that she fits in at the academy, and that she did not get in just because her mother is the superintendent. Cormak is the captain of the squadron and takes his brother’s spot at the academy, after he was killed in a mining incident. Arran is the technology officer and comes from Chetire, living as an outsider with only his mother. Orelia is a spy for the Specters, the academy’s enemies, and secretly sends information to them, waiting for the right time to invade and conquer. One wrong word, one wrong move, and she is dead.
I really enjoyed the plot of this book, but I wish that the perspectives of Arran and Orelia were longer. This book mainly focuses on Vesper and Cormak, but I would love to hear more from Arran and Orelia. The characters are very diverse, and their personalities are very different, but they all work together to reach the same goal. If you like sci-fi, Light Years is for you. This book ends on a cliffhanger, and I will definitely read the sequel. 4/5 stars.

Find this book in our catalog: Light Years