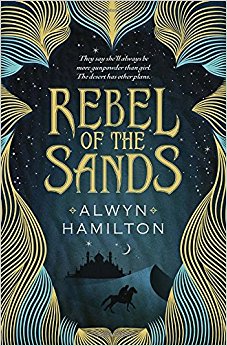 Rebel of The Sands

“Amani is desperate to leave the dead-end town of Dustwalk, and she’s counting on her sharpshooting skills to help her escape. But after she meets Jin, the mysterious rebel running from the Sultan’s army, she unlocks the powerful truth about the desert nation ofMiraji…and herself”– Provided by publisher

Rebel of The Sands, a young adult’s fantasy novel by Alwyn Hamilton, was read by the YA Book Club this month. The book, though quite complex and hard to follow at points, is one of few fantasy books that take place in the Middle East. Amani has to pretend to be a boy to succeed and follow her passions in the town of Dustwalk, which tells us a lot about the time and place this story is taking place in. The not-so-underlying sexism Amani faces in her day to day life adds the power of unexpected female voices in a genre that has typically only given power to male characters and awarded them the title of lead protagonist. The novel holds the overarching themes of power, magic, romance and politics. It was agreed that politics played one of the biggest roles in the novel alongside magic, in fact the story is structured so that it is hard to tell where the two themes don’t overlap. Magic and politics give power to both the antagonists and protagonists of this novel. This novel is appealing to most young adults interested in the fantasy genre because of the fantastic creatures the story features such as djinn, more commonly referred to as genies. Everyone in YA Book Club also had an opinion, overall a very positive and enthusiastic one, about the relationship between the main characters Amani and Jin. Their relationship holds a lot of phases starting as accomplices and developing over stages into acquaintances, friends and eventually what we interpreted as a romantic one as well. This book goes above and beyond its label as a fantasy novel. In this well-written saga, the topics of sexism, culture, love, politics and self-worth are touched as well giving the reader much more than they signed up for. The final rating was a 4.2 out of 5. For those who enjoyed this book we recommend the following: The Clockwork Angel, The Hunger Games, A Thousand Splendid Suns, Lord of the Rings, Lord of the Flies, Daughter of Smoke & Bones, and Shadow & Bone.

Find this book in our catalogue: Rebel of the Sands