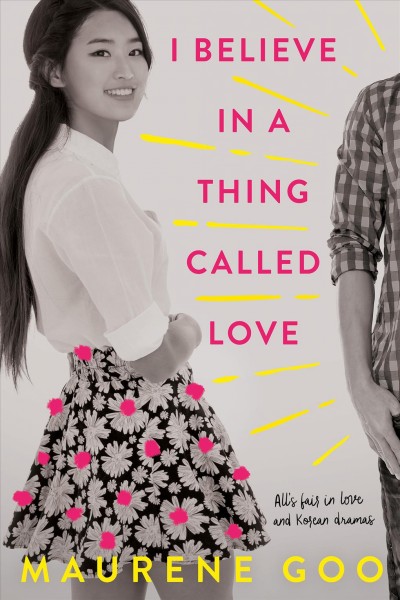 I Believe in a Thing Called Love by Maurene Goo

Desi Lee knows that anything is achievable if you have a plan and stick to it. So far, it’s gotten her everything she’s wanted – straight As, the student body presidency, and the varsity soccer team star role. The only thing she doesn’t have is a boyfriend, preferably the hot new guy at her school, whom she pantsed herself in front of. After a weekend spent binging K-Dramas with her dad, she resolves to follow her “K-Drama Steps to True Love,” win over the guy, and conquer her flirting failures, or “flailures” as she calls them, once and for all.
Hear me out: I know this book sounds beyond cheesy, and it is, but don’t let that stop you from picking it up. Sometimes all you need is a rom-com in the form of a book, and that’s exactly what this is, except even better because there’s actual representation! Before you even read the book, there’s an Asian model on the cover, which, disappointingly, isn’t seen often in YA fiction. Once you actually pick up the book, you’ll find that Desi is Korean, and throughout the book, you are exposed to her experiences of watching K-Drama, which is the basis of the plotline. I had never read anything, or even watched anything, remotely to do with K-Dramas, and so Desi’s hilarious scheme to use K-Drama love stories in order to help her own was really original to me, and I enjoyed experiencing it for the first time. Her methods aren’t ones I’d recommend, but as a fictional character, I can laugh and squee at them without getting secondhand embarrassment.
While at the beginning, Desi irritated me, as her “flailures” and need to succeed seemed a little too exaggerated; however, as the book went on, it became clear that that was intentional. After all, this was inspired by K-Dramas, and as Desi notices, the characters are often, well, dramatic. But she’s not just a goody two shoes from the start. Her mother died when she was seven, and she has basically been taking care of her father from then on. Even though she may have been slightly irritating in her lofty aspirations, she’s still really spunky. That’s amazing, especially since Asian girls are stereotyped as being meek. The side characters were hilarious, especially Desi’s dad, as his obsession with K-Dramas was absolutely adorable.
Overall, I’d give this book a 4 out of 5 stars because the romance, while exaggerated, was adorable, and Desi is a bold and inspiring heroine, especially as an Asian woman.

Find this book in our catalog: I Believe in a Thing Called Love