After a 1.8 billion-mile journey lasting close to 5 years, Juno has reached Jupiter’s orbit. Celebrate this big, big news with some only-tangentially-related titles for reading, watching or listening, while remaining decidedly closer to home.

A 2008 coming-of-age comedy directed by Jason Reitman (Thank You For Smoking). The narrative centers on whip-smart Juno (Ellen Page, in a breakthrough role), a teenage girl faced with an unplanned pregnancy from an afternoon with the charmingly unassuming Bleeker. Juno finds her unborn baby the perfect set of parents in Mark and Vanessa Loring (Jason Bateman and Jennifer Garner), an affluent suburban couple who are eager to adopt. Along with the total support of her parents, Juno conquers her problems head-on, displaying a youthful exuberance that is both smart and unexpected. The soundtrack features tracks from Kimya Dawson, The Kinks, Buddy Holly, Sonic Youth, Belle & Sebastian, Mott The Hoople, Cat Power and others. Grant Archer merely wanted to study astrophysics, to work quietly as an astronomer on the far side of the moon. But the forces of the New Morality, the coalition of censorious do-gooders who run twenty-first-century America, have other plans for him.

To his distress, Grant is torn from his young bride and sent to a research station in orbit around Jupiter, charged with the task of spying on the scientists who work there. Their work may lead to the discovery of higher life forms in the Jovian system – a discovery whose implications might destabilize the theocratic power structure back on earth.

What Grant’s would-be controllers don’t know is that his loyalty to science may be greater than his desire for a quiet life. But that loyalty will be tested in a mission as dangerous as any ever undertaken.

Meanwhile, what lurks in the middle reaches of Jupiter’s vast atmosphere is more than any faction has counted on . . . and stranger than anyone could possibly have imagined.

Juno and Juliet Taylor are twin sisters heading off together to the University of County Galway. It’s the Irish girls’ first time away from home, and they’re looking forward to exploring much more than the library, learning much more than what the books will teach them. With the delightful ease and charm of a young Roddy Doyle, Julian Gough takes them off to a first year of college worthy of a twenty-first-century Jane Austen novel.

Juliet, our narrator, is both adoring and envious of her identical twin, whom she considers the more beautiful, not to mention more clever and more charming, sister. When the college boys – and a certain handsome grad student – begin dropping at Juno’s feet (as usual, her sister assures us), Juliet becomes determined not to be outdone. From the streets of Chicago to far flung galaxies whirling through space, Jupiter Ascending is a science fiction epic adventure that follows the downtrodden Jupiter Jones (Mila Kunis — Black Swan), who’s destined for greatness. When a genetically engineered ex-military hunter Caine (Channing Tatum — Magic Mike) tracks her down, she starts to glimpse the fate waiting for her all along — her genetic signature marking her as next in line for an extraordinary inheritance that could alter the balance of the cosmos. Lana and Andy Wachowski (The Matrix films, Cloud Atlas) take us on another visionary journey into the unknown. Also starring Sean Bean (Game of Thrones), Eddie Redmayne (Les Misérables) and Douglas Booth (Noah), this sci-fi thrill-ride will expand your universe. The battle for our world begins with her.
On Jupiter Place: Poems by Nicholas Christopher Best known as a novelist, Nicholas Christopher began publishing poems in The New Yorker in his twenties, and has published eight collections, praised over the years by poets and critics as being among Americaâs most important poets. Reviewing his selected poems, Crossing the Equator, published eight years ago, The Washington Post said, To read his richly honed and sensuous work, which has so much tensile strength, is to visit other worlds and then to return to our own disturbed by time, but also refreshed and reawakened.
On Jupiter Place is his first book since that collection, and it contains material that is perhaps his most personal, autobiographical and intimate work yet. Beautifully made and carefully constructed, one might be reminded of Keats thinking that his poems were little machinesâ of feeling. And everywhere in this book are moments of disorientation, where the wonder of the poem transcends understanding and leads its readers back into themselves slightly startled and richer for the effort. As Merwin has written, his poems are vibrant with light and the surprise of recognition. He shows us again and again the luminous nature of the familiar.
Cosmos by Carl Sagan 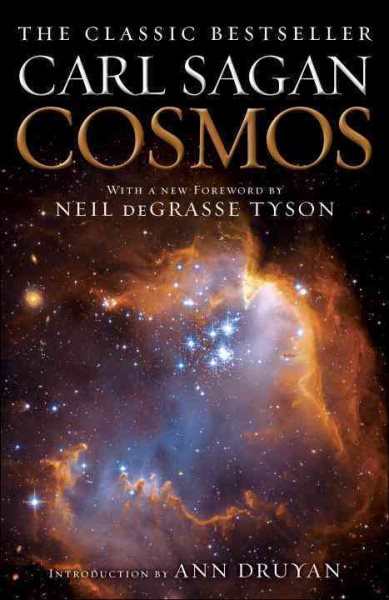 Finally, for something a little more directly related to space exploration, here’s Sagan’s classic, with a new Foreword by Neil DeGrasse Tyson.
Cosmos is one of the bestselling science books of all time. In clear-eyed prose, Sagan reveals a jewel-like blue world inhabited by a life form that is just beginning to discover its own identity and to venture into the vast ocean of space. Featuring a new Introduction by Sagan’s collaborator, Ann Druyan, full color illustrations, and a new Foreword by astrophysicist Neil deGrasse Tyson, Cosmos retraces the fourteen billion years of cosmic evolution that have transformed matter into consciousness, exploring such topics as the origin of life, the human brain, Egyptian hieroglyphics, spacecraft missions, the death of the Sun, the evolution of galaxies, and the forces and individuals who helped to shape modern science.