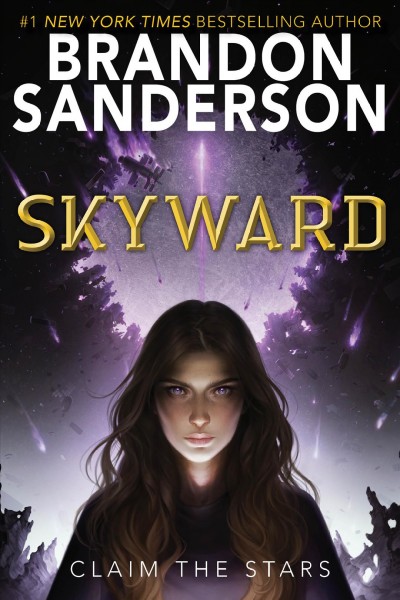 Spensa’s world has been under alien attack for decades. Pilots are the heroes of what’s left of humanity, and becoming a pilot is Spensa’s dream. Ever since she was a little girl, Spensa has dreamed of soaring skyward and proving her bravery. But her father’s legacy stands in the way—he was a pilot who was killed for desertion years ago, branding Spensa the daughter of a coward, and making her chances of attending flight school slim to none. Spensa is still determined to fly—even if it means she must be as resilient in the face of long odds as humanity itself has had to be against the alien threat. And her accidental discovery in a long forgotten cavern might just grant her a way to claim the stars.

Brandon Sanderson returns to the world of science fiction with a strong entry in Skyward. Although traditionally a writer for the High Fantasy genre, Sanderson’s previous science-fiction series The Reckoners met with resounding approval for not only his writing style, but also the books nuanced setting. Skyward at times feels less than flushed out, owing to the fact that a majority of the book takes place in a single location, with any and all developments being only temporary removals from the central location. Thankfully, any locational banality is offset by Spensa’s unique character. Possessing her own, unusual outlook on the world, Spensa can at times feel a bit archetypal and predictable. However, Sanderson’s novels are nothing without his characters, which makes Skyward unusual in that it lavishes its attention on Spensa. Her character is indelibly rooted in her view of her father. The belief in her father’s innocence is one of the driving forces of her character, and as this belief is developed, so is Spensa’s character. Along for the ride are a plethora of stereotype-breaking companions. From the stuck-up rich kids who actually turn out to be really nice, to the lifelong friend who isn’t just a supporting force ever doomed to the shadows, Sanderson’s main character development of side-actors is through their inherent nuance, rather than any defining transformation. Overall, the book was a riveting blend of plot and character work, with a sequel implied yet not stated. Sanderson’s personal style can be felt all over the book, from seemingly frivolous quirks, to world-shattering plot twists. Skyward deserves 4.5/5.