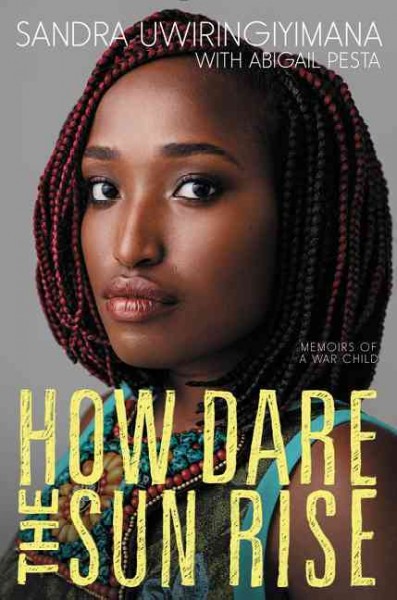 How Dare the Sun Rise: Memoirs of a War Child by Sandra Uwiringiyimana with Abigail Pesta

This is a story of loss and discovery, of grief and triumph, and of unflagging resilience in the face of tragedy and hardship.
Sandra Uwiringiyimana lives with her family in a yellow house in Uvira, Democratic Republic of Congo. She loves to play with her siblings and swim in a sparkling lake near her home. An excellent student, she dreams of becoming a news reporter. However, she and her family are Banyamulenge, a tribe native to Rwanda, and are considered foreigners in the Congo. War rages constantly in nearby areas, and when tensions against their people run especially high, Sandra and her family are forced to flee their home. One night, when her family was living in a refugee camp in Burundi, near a town called Gatumba, rebels attack the camp and slaughter the residents. Sandra’s mother and little sister are shot before her eyes, and Sandra narrowly escapes, with a gun pointed at her head.
After months of grief and dire poverty, Uwiringiyimana and her surviving family members immigrate to America as refugees. There, Sandra quickly learns that life in the U.S. is not the glittering prospect it was portrayed as. She writes that she “had grown up in a war zone, but life in America… was a different kind of war zone.” Sandra has to deal with hostile children, a new and mysterious culture and language, and the cruel reality of racism as she and her family struggle. Their remarkable resilience and determination help forge a new and better life. However, Sandra never forgets her people, nor her desire for the perpetrators of the Gatumba Massacre to be brought to justice. She embarks on a path of activism, determined to give refugees, the Banyamulenge, and all children affected by war a voice on the world stage.
Uwiringiyimana’s story shows that refugees and those living in war-torn nations are more than mere statistics. She writes that she “was tired of simply existing between the lines of articles and books that were written by people who had never met [her] and knew very little of what it was like to be [her].” This is a necessary read for anyone seeking a better understanding of the daily hardships faced by refugees. While dark, it is a truly inspirational story of a strong and determined woman whose direct encounters with terror and hate leave her unchanged in her commitment to achieving harmony among all people. In her own words: “We must open up our hearts. We must not fall prey to the kind of thinking that separates us.” 4/5 stars.

Find this book in our catalog: How Dare the Sun Rise: Memoirs of a War Child