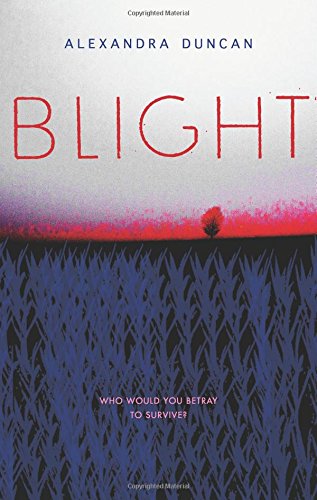 Summary: Seventeen-year-old Tempest Torres has lived on the AgraStar farm north of Atlanta since she was found outside the gates at the age of five. Now she’s part of the security force guarding the fence and watching for scavengers—people who would rather steal genetically engineered food from the company than work for it. When a group of such rebels accidentally sets off an explosion in the research compound, it releases into the air a blight that kills every living thing in its path—including humans. With blight-resistant seeds in her pocket, Tempest teams up with a scavenger boy named Alder and runs for help. But when they finally arrive at AgraStar headquarters, they discover that there’s an even bigger plot behind the blight—and it’s up to them to stop it from happening again. A fast-paced action-adventure story that is Margaret Atwood’s Oryx and Crake meets Nancy Farmer’s House of the Scorpion. -Goodreads

Blight by Alexandra Duncan is a book aimed at the YA population. To set the stage, the book has three main components. One: the USA is run by corporations now. Two: there are people who live outside the corporation’s influence, and three: the corporations each specialize in one thing. For AgraStar, our main character Tempest’s company, it is corn. However, when an operation to quell down a rogue farmer goes horribly wrong, the entire base is evacuated. Tempest is forced to work with a rogue as they try to find their way out of the mess. After surviving hijackers, killers, and even AgraStar patrols, she arrives at the company headquarters. But what will happen when she arrives, and what secrets will she discover?
This book was decidedly average. It brought nothing new to the genre. The characters were predictable, uninteresting, and very flat. Their next move could be interpreted easily. The plot and book itself were not original either. This book was honestly a giant cliché with nothing new about it. The book was also much longer and had much more plot “twists” than were needed. Most of it was fluff, with very little plot-relevant substance, at least in my opinion. This book is a rather uninteresting addition to the YA books, and I did not really enjoy reading it. 2/5 stars.

Find this book in our catalog: Blight