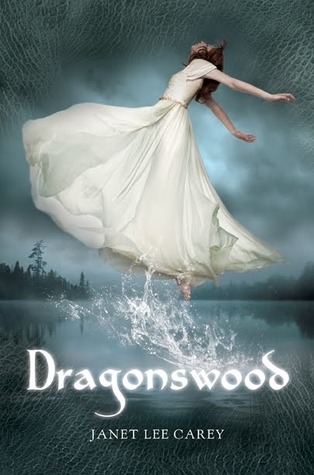 Dragonswood is difficult to capture in few words. The novel is centered on a 17 year old girl named Tess who is accused of witchcraft and forced to flee her home in Wilde Island. She and her two close friends find themselves in thrilling situations as they become targets of terrifying witch hunters and the powerful royal family. The entire story line shifts around the halfway point as Tess realizes her place in a prophecy that promises peace between the humans, dragons, and fairies. Armed with new knowledge and new questions as well, Tess takes it upon herself to find answers in a world torn by hatred, and ultimately, to peacefully unite the three species once more.

As I mentioned before, the plot takes a rather dramatic shift around the halfway point. The first half of the book tackles more of the history behind Dragonswood, namely, the witch trials. The second half introduces the readers to the fantasy component–the dragons, the fey, and the prophecies. Due to the seemingly inconsistent plot, some parts of the book can get a bit confusing, but the story ties together with a satisfying ending.

Dragonswood had (almost) everything that the reviews on the inside cover promised–wild adventures, enchanting scenery, charming creatures, a strong and clever heroine, and romance. Unfortunately, Carey promises the readers an “epic” romance, and, as much as I enjoyed every other aspect of the book, I feel that the odd, rather forced romantic attraction between Tess and Garth (a guardian of the fey-inhabited area of Dragonswood) was simply out of place. Everything about their interactions, especially the awkward dialogue, failed to add to the novel’s quick-moving plot and even slowed it down at times.

Carey’s Dragonswood is a dark, alluring fantasy filled with mystery, magic, and adventure. It is the second in the Wild Island Chronicles, but one can still understand the novel without reading the first. I recommend reading Dragon’s Keep beforehand to get a better understanding of some of the minor characters, but, again, it is not necessary. I would give this novel a perfect score were it not for the addition of the romance, but otherwise, I give this novel 4 stars. –Kira Toal, Teen Reviewer

Find the book in our catalog: Dragonswood

Summary: In 1192 A.D. on Wilde Island, Tess, the daughter of a cruel blacksmith, is accused of witchcraft and must flee, but when she meets a handsome and enigmatic warden of Dragonswood who offers her shelter, she does not realize that he too harbors a secret that may finally bring about peace among the races of dragon, human, and fairy.