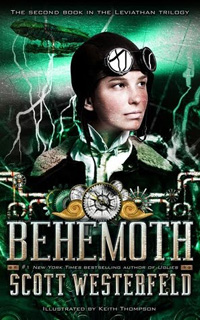 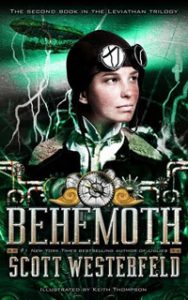 In the second installment of Leviathan, an alternate version of WW1 rages on. Deryn, a 15 year old girl disguised as a boy in the British air force on an airship, becomes close friends with Alek, the secret heir to the Austrian throne and prisoner aboard the airship. In this reality there have been fantastical scientific strides, which is why the “airship” is actually a gigantic whale called a Leviathan. Alek escapes, accidentally taking an experimental genetically modified creature with him, leaving Deryn still on the airship.  She is tasked with sabotaging the enemy. During her mission she runs into Alek, and they team up to attack the enemy that Deryn was tasked with sabotaging.

I liked this book and how it staged things. It set up each and every scene as an moment that was amplified by what was happening. Each scene was written in sight of what was happening. However, sometimes the scenes moved too slow and had too much detail that detracted from the overall situation. Behemoth was a great read. I think it was worth reading. 3 stars out of 5.

Find this book in our catalog: Behemoth