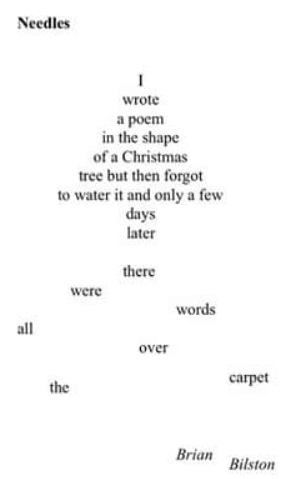 We shared this clever (and visual) poem by Brian Bilston yesterday on Facebook, and the response by followers indicates that lots of other people were delighted by it, too. Brian Bilston mostly Tweets his poems, and you can find him and follow him there (@brian_bilston). We’re further inspired to make this week’s post all about poetry. Like music, paintings, and other forms of art, the right poem at the right moment can be everything–to gladden your heart, accompany your soul through tough times, make you think, stir you to action, or make you laugh. Here are some titles to consider. Cozy up to the fireplace, settle into your comfiest chair, and read a poem or two. 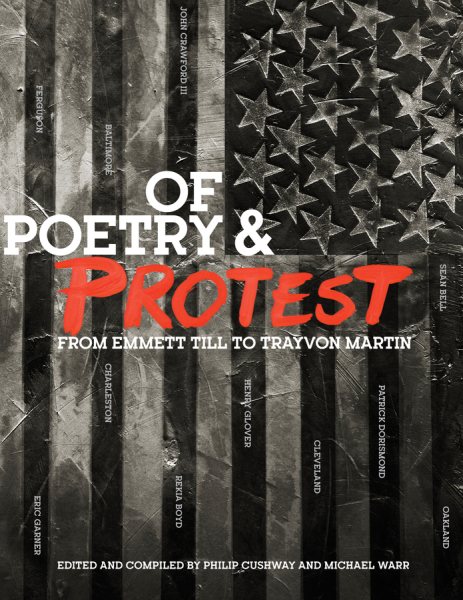 Of Poetry & Protest: From Emmett Till to Trayvon Martin edited and compiled by Philip Cushway and Michael Warr

This collection of poems and essays from 43 African-American poets, with photographs by Victoria Smith, functions as a platform for some of America’s most prominent black poets to share how they came to poetry, how poetry functions in the social milieu, and how poems can address social justice, protest, and history. In his preface, editor Cushway writes that he aimed to produce “a book that would contain reverberating elements that appeal to nontraditional readers of poetry.” As an introduction to some of the country’s finest black writers, it succeeds. The anthology largely focuses on established, prominent poets writing in accepted modes, though a handful of younger poets round it out, along with quotes, stand-alone essays, and art displayed prominently along with the portraits. The poetry itself addresses topics such as slavery and reconstruction, the civil rights era, Martin Luther King Jr., Move, Malcolm X, France’s May 1968 protests, Obama’s presidency, police murders, and the Black Lives Matter movement. Amiri Baraka, in his 2013 essay “Protest Poetry” (reprinted here), writes that African-American literature “reveals American lives, culture and history in a depth that nothing else is able to do.” Through the stories, struggles, beliefs, and work of these living black poets emerges the story of a nation. 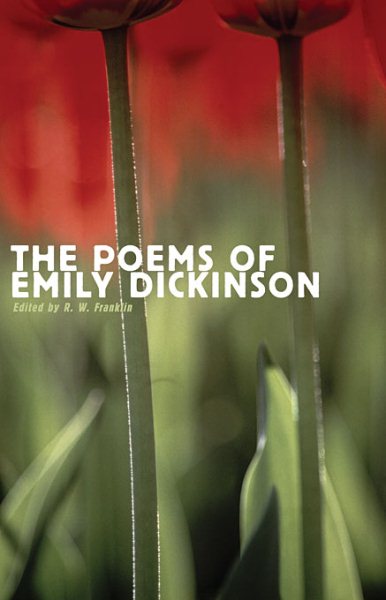 The Poems of Emily Dickinson edited by R.W. Franklin

Emily Dickinson, poet of the interior life, imagined words/swords, hurling barbed syllables/piercing. Nothing about her adult appearance or habitation revealed such a militant soul. Only poems, written quietly in a room of her own, often hand-stitched in small volumes, then hidden in a drawer, revealed her true self. She did not live in time but in universals–an acute, sensitive nature reaching out boldly from self-referral to a wider, imagined world.

Dickinson died without fame; only a few poems were published in her lifetime. Her legacy was later rescued from her desk–an astonishing body of work, much of which has since appeared in piecemeal editions, sometimes with words altered by editors or publishers according to the fashion of the day.

Now Ralph Franklin, the foremost scholar of Dickinson’s manuscripts, has prepared an authoritative one-volume edition of all extant poems by Emily Dickinson–1,789 poems in all, the largest number ever assembled. This reading edition derives from his three-volume work, The Poems of Emily Dickinson: Variorum Edition (1998), which contains approximately 2,500 sources for the poems. In this one-volume edition, Franklin offers a single reading of each poem–usually the latest version of the entire poem–rendered with Dickinson’s spelling, punctuation, and capitalization intact. The Poems of Emily Dickinson: Reading Edition is a milestone in American literary scholarship and an indispensable addition to the personal library of poetry lovers everywhere. 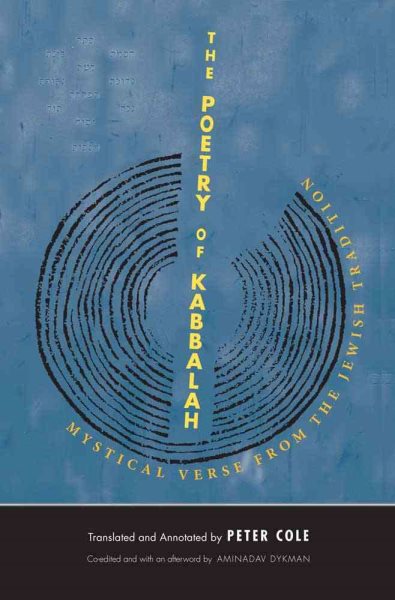 Poetry of Kabbalah: Mystical Verse From the Jewish Tradition translated and annotated by Peter Cole; co-edited and with an afterword by Aminadav Dykman

A measure of holiness, / a measure of power, so begins one of the earliest poems in this resplendent collection of the poetry of the Jewish mystical tradition. Cole, a poet, translator, and scholar whose many honors include a MacArthur fellowship, with assistance from coeditor Dykman, has created a dazzling treasury of verse spanning more than 1,500 years and accompanied by fascinating, illuminating commentary rich in history, biography, and literary expertise. Because the letters and words themselves are believed to be holy, the poems of the kabbalah not only depict a mystical process, they produce it. Here are simple hymns and cosmological masterpieces that precipitate a sense of transcendence. Fluent in the complex spiritual and cultural context of kabbalah poems from Palestine, Babylon, Ashkenaz, Spain, Turkey, North Africa, and Europe, Cole has brilliantly preserved their diverse prosodies and ecstatic lyricism in his supple translations, allowing readers to fully appreciate how they grapple with timeless concerns and engender transformation. As the great Hebrew poet Shelomoh Ibn Gabirol (circa 1021–56) wrote, From a sacred place they descend, / from the source of light they extend.

The easy swing of Collins’ lines reflects his love of jazz and his ready response to beauty; the warmth of his voice emanates from his instinct for pleasure and his propensity toward humor. The title poem, for instance, is an improvisation on a terse description of a fatal freak accident in Nabokov’s Lolita in which Collins, ever on the lookout for that old silver lining, or the happy bafflement of a koan, turns his contemplation of “the instant hand of Death / always ready to burst forth” into a subtle celebration of life. It’s all in the mind, he implies, writing most ebulliently and perceptively about the realm of the imagination: an evening spent reading the F section of a single-volume encyclopedia becomes the catalyst for a hilarious sequence of thoughts, and a tour through the candy-smooth pages of a Victoria’s Secret catalog evolves into a performance of great wit and sweet self-mockery. Collins is jazzman and Buddhist, charmer and prince. 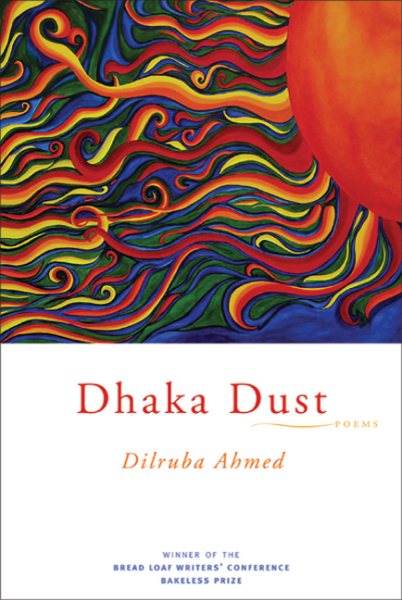 Winner of the Bakeless Prize, this debut presents rich poetry that embraces the physical and the sensual in life. Ahmed’s alert and filtering eye detects the most overlooked details and breathes a new life into them—”I thought you’d sail/ into that sea with/ me, into the water/ hanging at the horizon/ like a pale slice of slate”—and delivers a vivid sense of awakening to everyday circumstances of life—”My sandals gather dung in the fields—/ my heels caked with dirt, collecting/ wildness.” Ahmed’s subjects range from poverty to childhood memories, immigrants, motherhood, and family, all narrated in a smooth lyrical and emotionally restrained language. Places intimate to her, from Dhaka in Bangladesh to Ohio, stream through her lines as traces of broken anecdotes, repressed sorrows, and the stories of people passed by.

Poetry Will Save Your Life: A Memoir by Jill Bialosky

Bialosky (History of a Suicide) weaves 51 poems by several writers into her latest memoir, which beautifully conveys the “mystery and wonder” of poetry. Born in 1950s Cleveland, Bialosky was a toddler when her father died; though she was close with her mother and sisters, she yearned for the “tenderness and love” that she imagined a father would have provided. As she grew older, Bialosky found the tenderness she was longing for in poetry. A bookish, reserved teen, she attended college in Vermont and Ohio and then became an editor in New York (she’s currently an executive editor at Norton), holding fast to her desire to write and live an independent, creative life. As the years pass in her story, Bialosky touches on familiar themes—young love, faith, grief and loss, political issues, sexuality—and intersperses vignettes from her life with the works of Robert Frost, W.H. Auden, Edna St. Vincent Millay, and Sharon Olds. Readers will learn about how the “personal and communal” aspects of poetry intertwine for her, and will also discover how poems resonated with the author at specific times in her development (e.g., the loneliness of childhood is recalled in a poem by Rilke; as a new mother, Bialosky finds joy in Sylvia Plath’s “Nick and the Candlestick”). Bialosky also includes some fascinating facts about the poets themselves (Robert Louis Stevenson loved The Arabian Knights; Emily Dickinson saw the publication of only 12 of her 1,800 poems). Bialosky’s memoir is equally an enjoyable learning experience and an intimate rendering of a poet’s passion for words. 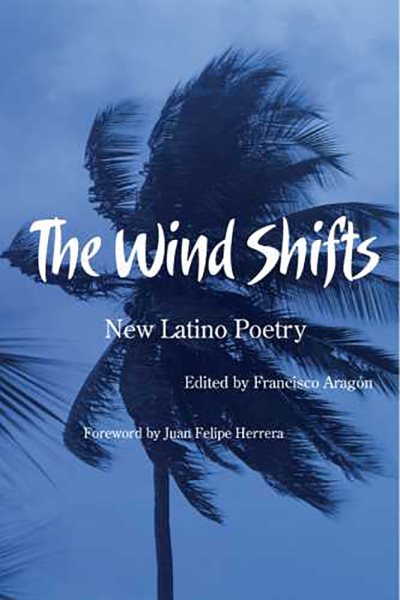 The title of this ravishing collection of poems by 25 Latino and Latina writers can be read as an allusion to change and to the fact that poetry is a force, like wind, that knows no borders. In his rich and orienting introduction, poet and editor Aragon affirms that Latino poetry is evolving and extending its reach in sync with the vitality and influence of Latino life and culture. Since the publication of two earlier Latino poetry anthologies edited by Latino poets, Virgil Suarez’s Paper Dance (1995) and Ray Gonzalez’s ouching the Fire (1998), Latino and Latina poets have continued to write poems that can be described as political, while also exploring profoundly personal and resonantly mythic themes, delving into history, and imagining settings as diverse as the U.S.-Mexico border, a rain forest, a snow-covered street, a grocery store, a strip club, and a sacred place. Whether inspired by family, love, despair, poems by Rilke, or a painting by Jose Clemente Orozco, the poets gathered here are involved in the infinite possibilities of language. 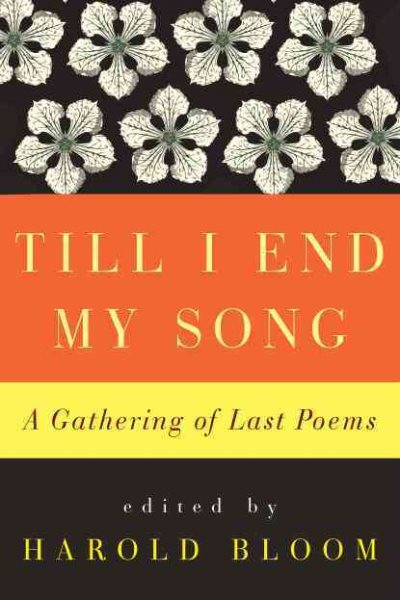 Til I End My Song: A Gathering of Last Poems edited with commentaries by Harold Bloom

Bloom may be the most famous poetry critic in the English language. As he approached his 80th birthday, he turned his critical faculties toward the subject of death: this surprisingly enjoyable anthology contains the last poems–or the poems that most profoundly contemplate “lastness”–by 100 poets, from Edmund Spenser (d. 1599) to Agha Shahid Ali (d. 2001). Bloom seeks to show, through his selections and commentaries on each poem, that death can be as much an inspiration as a terror. With their last breaths, these poets address God (as John Donne does: “Wilt thou forgive that sin where I begun,/ Which is my sin, though it were done before?”); future generations (Samuel Taylor Coleridge, in his “Epitaph,” tells those who pass his gravestone, “Beneath this sod/ A poet lies” who “Found death in life” and who hopes to “find life in death!”); a vast public and private self (Frost said, “I opened the door so my last look/ Should be taken outside a house and book”). James Wright finds a new kind of life in the apprehension of his mortality: “How can I feel so warm/ Here in the dead center of January?” Throughout, Bloom’s brief prose comments illuminate and entertain.