She Weeps Each Time You’re Born by Quan Barry

Quan Barry’s luminous fiction debut brings us the tumultuous history of modern Vietnam as experienced by a young girl born under mysterious circumstances a few years before the country’s reunification, a child gifted with the otherworldly ability to hear the voices of the dead.

At the peak of the war in Vietnam, a baby girl is born along the Song Ma River on the night of the full moon. This is Rabbit, who will journey away from her destroyed village with a makeshift family thrown together by war. Here is a Vietnam we’ve never encountered before: through Rabbit’s inexplicable but radiant intuition, we are privy to an intimate version of history, from the days of French Indochina and the World War II rubber plantations through the chaos of postwar reunification. With its use of magical realism—Rabbit’s ability to “hear” the dead—the novel reconstructs a turbulent historical period through a painterly human lens. This is the moving story of one woman’s struggle to unearth the true history of Vietnam while simultaneously carving out a place for herself within it. 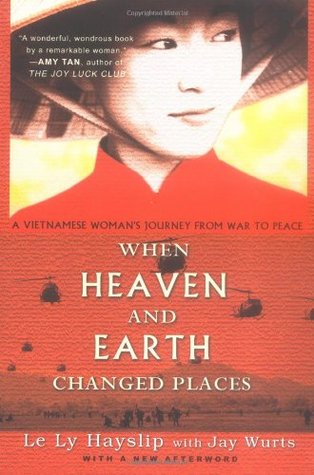 When Heaven and Earth Changed Places: A Vietnamese Woman’s Journey from War to Peace by Le Ly Hayslip with Jay Wurts

It is said that in war heaven and earth change places not once, but many times. When Heaven and Earth Changed Places is the haunting memoir of a girl on the verge of womanhood in a world turned upside down. The youngest of six children in a close-knit Buddhist family, Le Ly Hayslip was twelve years old when U.S. helicopters langed in Ky La, her tiny village in central Vietnam. As the government and Viet Cong troops fought in and around Ky La, both sides recruited children as spies and saboteurs. Le Ly was one of those children.

Before the age of sixteen, Le Ly had suffered near-starvation, imprisonment, torture, rape, and the deaths of beloved family members, but miraculously held fast to her faith in humanity. And almost twenty years after her escape to Ameica, she was drawn inexorably back to the devastated country and family she left behind. Scenes of this joyous reunion are interwoven with the brutal war years, offering a poignant picture of Vietnam, then and now, and of a courageous woman who experienced the true horror of the Vietnam War and survived to tell her unforgettable story. 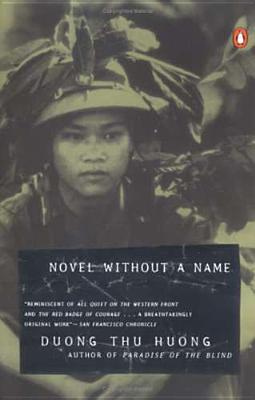 Novel without a Name by Duong Thu Huong

A piercing, unforgettable tale of the horror and spiritual weariness of war, Novel Without a Name will shatter every preconception Americans have about what happened in the jungles of Vietnam. With Duong Thu Huong, Vietnam has found a voice both lyrical and stark, powerful enough to capture the conflict that left millions dead and spiritually destroyed her generation.

Banned in the author’s native country for its scathing dissection of the day-to-day realities of life for the Vietnamese during the final years of the “Vietnam War,” Novel Without a Name invites comparison with All Quiet on the Western Front and other classic works of war fiction. The war is seen through the eyes of Quan, a North Vietnamese bo doi (soldier of the people) who joined the army at eighteen, full of idealism and love for the Communist party and its cause of national liberation. But ten years later, after leading his platoon through almost a decade of unimaginable horror and deprivation, Quan is disillusioned by his odyssey of loss and struggle. Furloughed back to his village in search of a fellow soldier, Quan undertakes a harrowing, solitary journey through the tortuous jungles of central Vietnam and his own unspeakable memories. 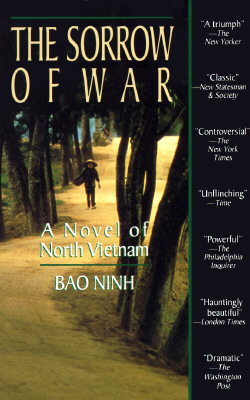 The Sorrow of War: A Novel of North Vietnam by Bao Ninh

In a novel of the Vietnam War, told from the North Vietnamese point of view, Kien narrates his memories of his youth, the war, and his attempts to cope with the horrors of war and his own survival.

The Sorrow of War – by turns bleak and poetic, pellucid and cunning – opens with Kien, an infantry cadre from Hanoi, engaged in the grim business of retrieving and burying the dead at the scene of one of the bloodiest battles of the war. From here, the novel ranges back to Kien’s youth and the pains of adolescent love, and moves forward to his attempts, as a struggling writer in postwar Hanoi, to come to grips with the savageries he has witnessed, to make sense of death, love, and loss – and of his own survival.

In 1978 six refugees – a girl, her father, and four “uncles” – are pulled from the sea to begin a new life in San Diego. In the child’s imagination, the world of itchy dresses and run-down apartments is transmuted into an unearthly realm: she sees everything intensely, hears the distress calls of inanimate objects and waits for her mother to join her.

But life loses none of its strangeness when the family is reunited. As the girl grows, her matter-of-fact innocence eddies increasingly around opaque and ghostly traumas: the cataclysm that engulfed her homeland, the memory of a brother who drowned and, most inescapable, her father’s hopeless rage for a father’s order.

GB Tran is a young Vietnamese American artist who grew up distant from (and largely indifferent to) his family’s history. Born and raised in South Carolina as a son of immigrants, he knew that his parents had fled Vietnam during the fall of Saigon. But even as they struggled to adapt to life in America, they preferred to forget the past—and to focus on their children’s future. When his last surviving grandparents die within months of each other, GB visits Vietnam for the first time and begins to learn the tragic history of his family, and of the homeland they left behind.

In this family saga played out in the shadow of history, GB uncovers the root of his father’s remoteness and why his mother had remained in an often fractious marriage; why his grandfather had abandoned his own family to fight for the Viet Cong; why his grandmother had had an affair with a French soldier. GB learns that his parents had taken harrowing flight from Saigon during the final hours of the war not because they thought America was better but because they were afraid of what would happen if they stayed. They entered America—a foreign land they couldn’t even imagine—where family connections dissolved and shared history was lost within a span of a single generation.

Vietnamerica is a visually stunning portrait of survival, escape, and reinvention—and of the gift of the American immigrants’ dream, passed on to their children. Vietnamerica is an unforgettable story of family revelation and reconnection.

Robert, an Oakland cop, still can’t let go of Suzy, the enigmatic Vietnamese wife who left him two years ago. Now she’s disappeared from her new husband, Sonny, a violent Vietnamese smuggler and gambler who’s blackmailing Robert into finding her for him. As he pursues her through the sleek and seamy gambling dens of Las Vegas, shadowed by Sonny’s sadistic son, “Junior,” and assisted by unexpected and reluctant allies, Robert learns more about his ex-wife than he ever did during their marriage. He finds himself chasing the ghosts of her past, one that reaches back to a refugee camp in Malaysia after the fall of Saigon, as his investigation soon uncovers the existence of an elusive packet of her secret letters to someone she left behind long ago. Although Robert starts illuminating the dark corners of Suzy’s life, the legacy of her sins threatens to immolate them all. Vu Tran has written a thrilling and cinematic work of sophisticated suspense and haunting lyricism, set in motion by characters who can neither trust each other nor trust themselves. This remarkable debut is a noir page-turner resonant with the lasting reverberations of lives lost and lives remade a generation ago. Ocean Vuong was born in Saigon and moved as a child refugee to Connecticut, before moving to New York City to become a writer. When he couldn’t afford a place to sleep, he spent nights writing poetry at Penn Station.

In his haunting and fearless debut, Vuong walks a tightrope of vulnerability and reflects upon his family in exile, a reverential queer love, and the personal adoption of a sometimes inexplicable nation. Vuong’s poems show, through breath, cadence, and unrepentant enthrallment, that a gentle palm on a chest can calm the most necessary of hungers.