Many of our deepest motives come, not from an adult logic of how things work in the world, but out of something that is frozen from childhood.

This year’s winner of the Nobel Prize for Literature is author Kazuo Ishiguro, cited by the Swedish Academy as a  writer “who, in novels of great emotional force, has uncovered the abyss beneath our illusory sense of connection with the world.” The permanent secretary of the academy, Sara Danius, described his style: “If you mix Jane Austen and Franz Kafka then you have Kazuo Ishiguro in a nutshell, but you have to add a little bit of Marcel Proust into the mix.”

Born in Japan but raised and educated in England from the age of 5, Ishiguro is one of the most celebrated contemporary writers of English-language fiction. Ishiguro has been nominated four times for the Booker Prize and won the award once,  in 1989, for his novel Remains of the Day. His work includes novels, short stories, screenplays, and lyrics (including for songs on Stacey Kent’s Grammy-nominated album Breakfast on the Morning Tram.

Below are some Ishiguro titles you may want to check out if you haven’t yet read his work. 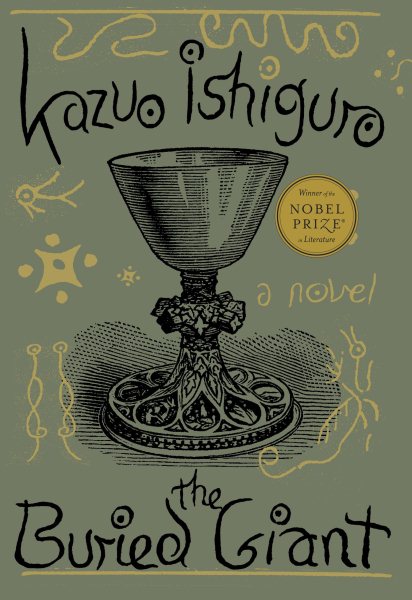 [This] novel is set in Arthurian England—not the mythic land of knights, castles, and pageants most of us are familiar with, but a primitive and rural country likely far closer to historical reality. This is a gray and superstitious place, rather than a battlefield alive with the color and movement of steeds and fluttering banners; it’s sparsely inhabited and scarcely advanced. Candles are preciously hoarded, and simple folk cluster together for safety amid vast stretches of untamed and fear-inspiring wilderness.The grim-textured, circa-sixth-century landscape is also a country haunted by magic, where ogres loom in the dark and steal children, and dragons are hunted by faded warriors like Sir Gawain. But its magic remains in the background, an earthy fact of life rather than a dazzle of sparkling make-believe. Here British peasants eke out a hardscrabble existence from caves dug into hillsides, while the recent Saxon invaders live in more-advanced villages of rudimentary huts. A strange fog hovers over the dreary countryside—where an uneasy peace has balanced on a knife edge since the end of the most recent wars—robbing the populace of its memories. Into this countryside our protagonists—an elderly, ailing British couple named Axl and Beatrice—embark on a pilgrimage to the village of their half-forgotten son. It’s a sad, elegiac story, one that has a tone and texture suited to its subject matter: a dreamy journey, repetitive and searching as lost memory.

This suite of five stories hits all of Ishiguro’s signature notes, but the shorter form mutes their impact. In “Crooner,” Tony Gardner, a washed-up American singer, goes sloshing through the canals of Venice to serenade his trophy wife, Lindy. The narrator, Jan, is a hired guitar player whose mother was a huge fan of Tony, but Jan’s experience playing for Tony fractures his romantic ideals. Lindy returns in the title story, which finds her in a luxury hotel reserved for celebrity patients recovering from cosmetic surgery. The narrator this time is Steve, a saxophonist who could never get a break because of his “loser ugly” looks. Lindy idly strikes up a friendship with Steve as they wait for their bandages to come off and their new lives to begin. In the final story, “Cellists,” an unnamed saxophonist narrator who, like Jan, plays in Venice’s San Marco square, observes the evolving relationship of a Hungarian cello prodigy after he meets an American woman.

Like Ishiguro’s previous works (The Remains of the Day; When We Were Orphans), his sixth novel is so exquisitely observed that even the most workaday objects and interactions are infused with a luminous, humming otherworldliness. The dystopian story it tells, meanwhile, gives it a different kind of electric charge. Set in late 1990s England, in a parallel universe in which humans are cloned and raised expressly to “donate” their healthy organs and thus eradicate disease from the normal population, this is an epic ethical horror story, told in devastatingly poignant miniature. By age 31, narrator (and clone) Kathy H has spent nearly 12 years as a “carer” to dozens of “donors.” Knowing that her number is sure to come up soon, she recounts-in excruciating detail-the fraught, minute dramas of her happily sheltered childhood and adolescence at Hailsham, an idyllic, isolated school/orphanage where clone-students are encouraged to make art and feel special. Protected (as is the reader, at first) from the full truth about their eventual purpose in the larger world, “we [students] were always just too young to understand properly the latest piece of information. But of course we’d take it in at some level, so that before long all this stuff was there in our heads without us ever having examined it properly.” This tension of knowing-without-knowing permeates all of the students’ tense, sweetly innocent interactions, especially Kath’s touchingly stilted love triangle with two Hailsham classmates, manipulative Ruth and kind-hearted Tommy. In savoring the subtle shades of atmosphere and innuendo in these three small, tightly bound lives, Ishiguro spins a stinging cautionary tale of science outpacing ethics. [Adapted into a 2010 film]

When We Were Orphans …Ishiguro’s [2000] novel triumphs with the seductiveness of his prose and his ability to invigorate shadowy events with sinister implications. Like all of Ishiguro’s protagonists, the narrator, here a recent Cambridge graduate named Christopher Banks, is an emotionally detached man who hides his real feelings from himself and who passively endures being trapped in nightmarish settings that give him “a grave foreboding.” Like the hero of The Unconsoled, Christopher is bewildered by “the assumption shared by everyone… that it was somehow my sole responsibility to resolve the crisis.” The crisis here is nothing less than averting WWII, which shares priority in Christopher’s mind with the disappearance of his parents in Shanghai in the early 1900s, when he was nine years old. Christopher is sent to school in England, where he first formulates his dream of becoming a famous detective, an objective he achieves at a young age. Though he is convinced that his parents are still alive and that he can find them, he doesn’t return to Shanghai until 1937, when he is in his mid 30s. It’s obvious to the reader that Christopher deludes himself about many things, such as his conviction that when he “roots out evil,” he is “cleansing the world of wickedness.” This inclination toward grandiosity is a direct result of Christopher’s sense of powerlessness as an orphan. While he is unaware of the connection, he is drawn to mercurial Sarah Hemmings, also orphaned in childhood. Ishiguro again conjures time and place with precise detail, evoking both the exotic atmosphere of prewar Shanghai, festering with the contrast between the arrogant residents of the International Settlement and the Chinese living in squalid slums and supplied with opium by foreign merchants, and class-conscious England, in which one’s “connections” depend on family lineage.

… Ishiguro tells a powerful story in which he once again exploits a narrator’s utter lack of self-knowledge to create a devastating deadpan irony. A celebrated concert pianist identified only as Mr Ryder arrives at an unnamed European (seemingly Germanic) city not only to give a concert but also, it seems, to address the townspeople and help them surmount a communal sense of crisis that stems from the city’s inability to nurture a musical artist of outstanding creative talent. Strangely, the economic, social and psychic health of the community depends on its regaining its self-image in the wake of a dreadful past mistake, when the city fathers lionized a musician with the ‘wrong” artistic values. Ryder intuits this situation gradually, for he is curiously disoriented; he can’t really remember what he’s supposed to be doing there. In fact, through Ryder’s confused perceptions, the reader is immediately plunged into a surrealistic landscape that has the eerie unpredictability, claustrophobic atmosphere and strange time sequences of a dream…The story seems to be a journey through life: its purpose never entirely clear, its events capricious and inexplicable, its destination undoubtedly ‘the vast, dark, empty space” of the soul’s extinction.

The Remains of the Day

This is Kazuo Ishiguro’s profoundly compelling portrait of Stevens, the perfect butler, and of his fading, insular world in post-World War II England. Stevens, at the end of three decades of service at Darlington Hall, spending a day on a country drive, embarks as well on a journey through the past in an effort to reassure himself that he has served humanity by serving the “great gentleman,” Lord Darlington. But lurking in his memory are doubts about the true nature of Lord Darlington’s “greatness,” and much graver doubts about the nature of his own life. [Adapted into a 1993 film]

An Artist of the Floating World

Masuji Ono saw misery in his homeland and became unwilling to spend his skills solely in the celebration of physical beauty. Instead, he envisioned a strong and powerful nation of the future, and he put his painting to work in the service of the movement that led Japan into World War II. Now, as the mature Masuji Ono struggles through the spiritual wreckage of that war, his memories of the “floating world” of his youth, full of pleasure and promise, serve as an escape from, a punishment for — and a justification of — his entire life. Drifting without honor in Japan’s postwar society, which indicts him for its defeat and reviles him for his aesthetics, he relives the passage through his personal history that makes him both a hero and a coward but, above all, a human being. An Artist of the Floating World is a sensual and profoundly convincing portrait of the artist as an aging man. At once a multigenerational tale and a samurai death poem written in English, it is also a saga of the clash of the old and new orders, blending classical and contemporary iconography with compassion and wit.

A Pale View of Hills

The story of Etsuko, a Japanese woman now living alone in England, dwelling on the recent suicide of her daughter. In a novel where past and present confuse, she relives scenes of Japan’s devastation in the wake of World War II.