This week in African-American History Month, we honor a local hero in Octavia Butler (1947-2006). This Pasadena native, graduate of John Muir High School (Class of ’65) and frequenter of Pasadena Public Library in her childhood, went on to great acclaim for her work. Among many honors and accolades, she was the first science fiction author to be awarded a MacArthur Fellowship in 1995, and received the PEN Center USA’s Lifetime Achievement Award in 2000.

As an African-American woman writing science fiction, Butler was a trailblazer, and her work earned multiple Hugo and Nebula awards. In 2006, her novel Kindred was the Pasadena Public Library selection for One City One Story. She passed away suddenly and unexpectedly just before her scheduled visit to Pasadena for the festivities.

Octavia Butler’s groundbreaking work and well-regarded science fiction continue to inspire readers and writers today. Here are some titles by her, works about her, and works by other authors: women whose work continues the tradition of African-American science fiction over 40 years after Butler’s first publication. 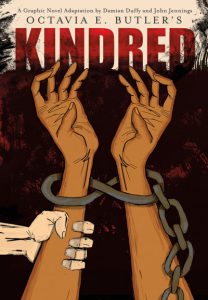 Almost 40 years after Kindred was first published (in 1979), a graphic novel adaptation has just been published. It is still so new it hasn’t yet made it to the shelves of PPL, but check back soon, we’ll have it!

“Kindred is a perfect candidate for the graphic-novel medium—Damian Duffy’s taut adaptation and John Jennings’s tense, electric renderings vibrate throughout, pacing and containing, then pushing every ounce of discomfort to the forefront. Comics and science fiction exploit their greatest shared strength by illuminating the mundane that surrounds us, allowing any reader to critique and process our world with new vision.”

“Together, Duffy and Jennings manage to condense Kindred into 240 pages that are respectful of Butler’s original work while also feeling like a distinctly new story at the same time. In exchange for some of Butler’s scene descriptions, the book offers up a richly rendered, raw take on Dana’s experience, heavy with thick lines and blurred movement conveying her existential disorientation.” (Gizmodo)

“Butler’s original novel is a powerful commentary on how the past informs the present and how we engage with both. But this adaptation makes an even more vivid statement about black Americans’ relationship with history. The kinetic lines feel urgent, messy, and visceral. The colors for scenes set in the present are muted while the colors of the past are vibrant, almost like a bright wake-up call to reality.” (Slate) The acclaimed trilogy that comprises LILITH’S BROOD is multiple Hugo and Nebula award-winner Octavia E. Butler at her best. Presented for the first time in one volume, with an introduction by Joan Slonczewski, Ph.D., LILITH’S BROOD is a profoundly evocative, sensual — and disturbing — epic of human transformation.

Lilith Iyapo is in the Andes, mourning the death of her family, when war destroys Earth. Centuries later, she is resurrected — by miraculously powerful unearthly beings, the Oankali. Driven by an irresistible need to heal others, the Oankali are rescuing our dying planet by merging genetically with mankind. But Lilith and all humanity must now share the world with uncanny, unimaginably alien creatures: their own children. This is their story..

(Lilith’s Brood was first published as Xenogenesis; PPL carries some out-of-print volumes under that title.)
Parable of the Sower by Octavia Butler When unattended environmental and economic crises lead to social chaos, not even gated communities are safe. In a night of fire and death Lauren Olamina, a minister’s young daughter, loses her family and home and ventures out into the unprotected American landscape. But what begins as a flight for survival soon leads to something much more: a startling vision of human destiny… and the birth of a new faith.
Fledgling by Octavia Butler Fledgling is the story of an apparently young, amnesiac girl whose alarmingly un-human needs and abilities lead her to a startling conclusion: she is in fact a genetically modified, 53-year-old vampire. Forced to discover what she can about her stolen former life, she must at the same time learn who wanted—and still wants—to destroy her and those she cares for, and how she can save herself. Fledgling is a captivating novel that tests the limits of “otherness” and questions what it means to be truly human.
Strange Matings: Science Fiction, Feminism, African American Voices, and Octavia E. Butler edited by Rebecca J. Holden and Nisi Shawl This noteworthy anthology—published by a feminist small press in memory of Butler—consists of a wide-ranging selection of sometimes-dense scholarly essays, highly readable reminiscences and personal essays, poems, correspondence, photographs, and interviews. Though she wasn’t prolific, Butler (1947–2006) produced several important novels (Kindred, Lilith’s Brood, Parable of the Sower) and short stories (“Blood Child,” “Speech Sounds”) that changed the genre of science fiction and helped empower many new SF writers of color. Highlights of this anthology include “Gambling Against History,” Susan Knabe and Wendy Gay Pearson’s queer reading of Kindred, Butler’s seemingly heterosexual time-travel/slave narrative; “The Spirit in the Seed,” writer, performer, and Ifa/Orisha priestess Luisah Teish’s heartfelt recollection of her discovery of Butler’s early novel Wild Seed; reminiscences by genre writers Steven Barnes, Tananarive Due, editor Shawl, and Nnedi Okorafor about what Butler and her work meant for their careers; and scholar Shari Evans’s “From ‘Hierarchical Behavior’ to Strategic Amnesia,” undoubtedly the most perceptive essay yet written on Fledgling, Butler’s final novel. Readers unfamiliar with the author’s fiction should start with her novels, but her many devoted fans will find this volume highly satisfying.
Conversations with Octavia Butler edited by Consuela Francis

Octavia Butler (1947-2006) spent the majority of her prolific career as the only major black female author of science fiction. Winner of both the Nebula and Hugo Awards as well as a MacArthur “genius” grant, the first for a science fiction writer, Butler created worlds that challenged notions of race, sex, gender, and humanity. Whether in the postapocalyptic future of the Parable stories, in the human inability to assimilate change and difference in the Xenogenesis books, or in the destructive sense of superiority in the Patternist series, Butler held up a mirror, reflecting what is beautiful, corrupt, worthwhile, and damning about the world we inhabit.

In interviews ranging from 1980 until just before her sudden death in 2006, Conversations with Octavia Butler reveals a writer very much aware of herself as the “rare bird” of science fiction even as she shows frustration with the constant question, “how does it feel to be the only one?” Whether discussing humanity’s biological imperatives or the difference between science fiction and fantasy or the plight of the working poor in America, Butler emerges in these interviews as funny, intelligent, complicated, and intensely original.

(Works by and about Octavia Butler)
Everfair by Nisi Shawl 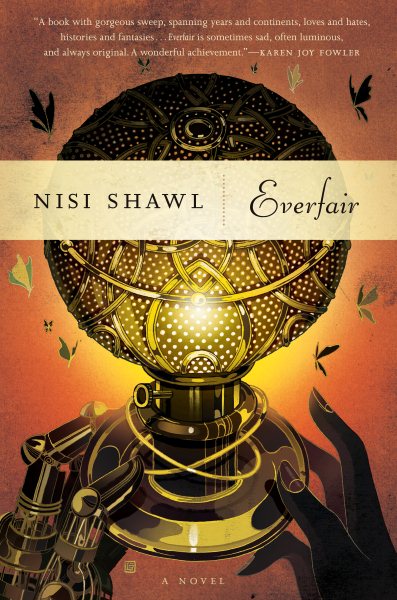 In this deeply compelling debut novel, Shawl, who’s well known for her short fiction (“Filter House”) and teaching (Writing the Other, with Cynthia Ward), takes readers to an alternate Earth where the inhumane history of the Belgian Congo is brilliantly rewritten when Africa’s indigenous populations learn about steam power. Determined to help former slaves return to Africa, African-American missionary and Civil War veteran Rev. Lt. Thomas Jefferson Wilson forms an alliance in 1889 with Great Britain’s Fabian Society, an organization interested in creating a model Socialist utopia. Together, they buy land in the Congo from Belgian’s King Leopold II and create Everfair, a homeland for returning former slaves, foreigners searching for a better life, and Congolese natives desperate to escape Belgium’s brutal grasp. Everfair draws in a variety of characters, including adventurers, broken families, poets, and inventors. Cultures clash as ancient traditions, old prejudices, and innovative technology feed fresh, new intrigues. Shawl deftly wields a diverse cast of characters to impressive effect, taking readers from the Victorian era to WWI and its aftermath. This highly original story blends steampunk and political intrigue in a compelling new view of a dark piece of human history.
(Works by Nisi Shawl)
Who Fears Death by Nnedi Okorafor Well-known for young adult novels (The Shadow Speaker; Zahrah the Windseeker), Okorafor sets this emotionally fraught tale in postapocalyptic Saharan Africa. The young sorceress Onyesonwu—whose name means “Who fears death?”—was born Ewu, bearing a mixture of her mother’s features and those of the man who raped her mother and left her for dead in the desert. As Onyesonwu grows into her powers, it becomes clear that her fate is mingled with the fate of her people, the oppressed Okeke, and that to achieve her destiny, she must die. Okorafor examines a host of evils in her chillingly realistic tale—gender and racial inequality share top billing, along with female genital mutilation and complacency in the face of destructive tradition—and winds these disparate concepts together into a fantastical, magical blend of grand storytelling.
(Works by Nnedi Okorafor)
Brown Girl in the Ring by Nalo Hopkinson The musical rhythms of Caribbean voices and the earthy spirit-magic of obeah knit together this unusual fantasy, the first winner of Warner Aspect’s First Novel Contest. Toronto in the next century is a “doughnut hole city,” its core collapsed into ruinous slums after much of the population left to escape rising urban crime and violence. Those who remain in the Burn are survivors like Ti-Jeanne and her grandmother Mami, who trade herbal cures and spells for necessities, or predators like drug-lord Rudy and the “posse” of men, including Ti-Jeanne’s ex-lover Tony, who sell “buff” for him. Outside the Burn, Catherine Uttley, the premier of Ontario, needs a heart transplant and a boost in her approval ratings. To accomplish both, she announces support for a return to voluntary human organ donation, allegedly to prevent the spread of Virus Epsilon, sometimes found in the porcine organs grown for transplant. The heart she needs will have to come from someone in the Burn, and Rudy saddles Tony with the job of finding a donor. Tony has no stomach for the job, however, and goes to Ti-Jeanne and Mami for help, bringing the unpredictable and powerful spirits of Caribbean obeah into play. Though the story sometimes turns too easily on coincidence, Hopkinson’s writing is smooth and assured, and her characters lively and believable. She has created a vivid world of urban decay and startling, dangerous magic, where the human heart is both a physical and metaphorical key.
(Works by Nalo Hopkinson)
Obelisk Gate by N.K. Jemisin 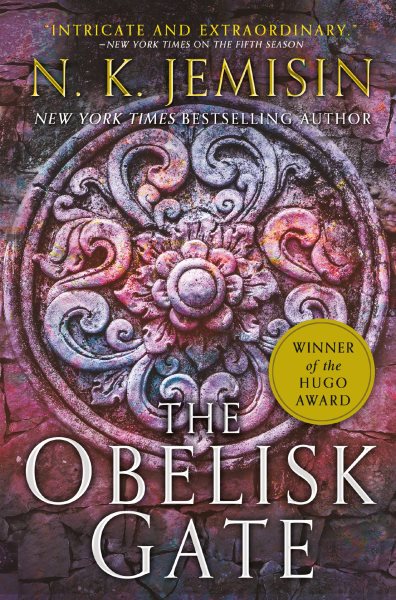 In this compelling, challenging, and utterly gripping work that combines elements of fantasy, science fiction, and horror, Jemisin draws readers deeper into the extraordinary setting and characters she introduced in The Fifth Season. In the world called the Stillness—which the first book hints may actually be our world, thousands of years in the future—orogenes are hated and feared for their ability to control the geological forces that shape the land. Powerful orogene Essun desperately searches for her eight-year-old daughter, Nassun, who was stolen away by her father. He hopes to find someone to “fix” the girl and excise her burgeoning orogene talent. But Essun’s search is interrupted by her old mentor, Alabaster. Alabaster is dying, and he hopes to use Essun’s powers to end the current “season,” a disastrous change in global climate that could destroy all life, by recapturing the planet’s long-lost moon, whose absence is the cause of the ironically named Stillness’s geological instability. While Essun and Alabaster struggle to save the world, an ancient entity with very different goals begins gathering its own crew of young orogenes—and it has Nassun, who in this volume becomes a character as troubled, complex, and fascinating as her mother. The Stillness and those who dwell there are vividly drawn, and the threats they face are both timely and tangible. Once again Jemisin immerses readers in a complex and intricate world of warring powers, tangled morals, and twisting motivations.
(Works by N.K. Jemisin)