This year’s One City One Story book, Orphan Train, is an adult book that centers around vivid, heartbreaking memories, so this year’s Short Story Writing Contest has a simple prompt: Write about a vivid memory. It can be from your past, or it can be an exploration of memories in a fictionalized way. 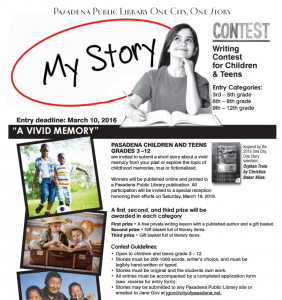 So in last Friday’s writing workshop, we focused on the sensory details that can make a memory truly “vivid.”

When I close my eyes, I hear Maisie’s cries and Mam’s screams, smell the acrid smoke, feel the heat of the fire on my skin, and heave upright on my pallet in the Schatzmans’ parlor, soaked in a cold sweat. –from Orphan Train, by Christina Baker Kline

We opened the workshop by reading selections from children’s biographies and memoirs containing vivid descriptions of memories:

Thick books
dog-eared from the handing down from neighbor
to neighbor. My sister handles them gently,
marks the pages with torn brown pieces
of paper bag, wipes her hands before going
beyond the hardbound covers.
Read to me, I say, my eyes and scalp already stinging
from the tug of the brush through my hair.
And while my grandmother sets the hot comb
on the flame, heats it just enough to pull
my tight curls straighter, my sister’s voice
wafts over the kitchen,
past the smell of hair and oil and flame, settles
like a hand on my shoulder and holds me there.
–From Brown Girl Dreaming by Jacqueline Woodson

Many great novels have been inspired by the author’s experiences and memories, especially Hatchet by Gary Paulsen. The inspiration for the pilot who has a heart attack at the beginning of the book came from his work as a volunteer emergency responder, as he describes in his memoir, Guts: When I came to write Hatchet, I remembered one call to a small ranch some sixty miles northeast of Colorado Springs…
It was just getting light as I ran into the house carrying our emergency bag, and I could smell what was happening as soon as I entered the kitchen. The lights were on and a man of about fifty was sitting at the kitchen table. His face was gray and he was holding his left shoulder with his right hand. He looked at me and smiled sheepishly, as if to apologize for the inconvenience, and started to say something but then stopped and looked again at the floor in what soldiers call the thousand-yard stare. His wife, a thin woman in jeans and a sweatshirt, stood by him, and she gave me what we called the Look–an expression that meant Thank God you’re here please save him please save him please save him.
But the smell of methane was very strong and the gray look was very bad and as I reached for him to put him on his back, he jolted as if hit by electricity, stiffened in the kitchen chair and fell sideways to the floor. His eyes looked into mine. Directly into my eyes…
“Call the hospital and tell them to bring the chopper now,” I said, and knelt to help him, but he was hit with another jolt that stiffened him and his eyes opened wide and the smell grew much stronger and I knew he was gone… I worked on this man now though the smell came up and the skin grew cold. I kept at the CPR because the woman kept giving me the Look and I could not give up hope. But minutes passed and then half an hour before I heard the sound of the rotors–which was very good time, though much too late for this man–and I kept working on him though I knew he was dead and I had seen him die…
–From Guts by Gary Paulsen

We talked about how these vivid memory passages involve all or almost all of the five senses–sights, sounds, feelings, smells and tastes. But what if, like Helen Keller, you have been deprived of one or more of your senses?

Ah, but even Helen Keller writes beautifully of her most vivid memories, in a way that brings you right into her mind and her experience in the moments after she fitfully threw the new doll her new teacher Miss Sullivan gave her onto the floor:

I was keenly delighted when I felt the fragments of the broken doll at my feet. Neither sorrow nor regret followed my passionate outburst. I had not loved the doll. In the still, dark world in which I lived there was no strong sentiment or tenderness. I felt my teacher sweep the fragments to one side of the hearth, and I had a sense of satisfaction that the cause of my discomfort was removed. She brought me my hat, and I knew I was going out into the warm sunshine. This thought, if a wordless sensation may be called a thought, made me hop and skip with pleasure. We walked down the path to the well-house, attracted by the fragrance of the honeysuckle with which it was covered. Some one was drawing water and my teacher placed my hand under the spout. As the cool stream gushed over one hand she spelled into the other the word water, first slowly, then rapidly. I stood still, my whole attention fixed upon the motions of her fingers. Suddenly I felt a misty consciousness as of something forgotten–a thrill of returning thought; and somehow the mystery of language was revealed to me. I knew then that “w-a-t-e-r” meant the wonderful cool something that was flowing over my hand.
–From The Story of My Life by Helen Keller

After contemplating these passages, discussing what makes them so vivid, we started brainstorming about our own life stories. We tried to choose one memory grounded in a strong emotion, and then explore each sensory detail of that memory. 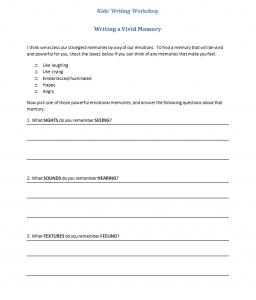 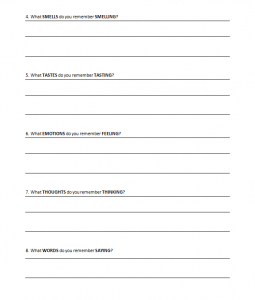 Then we worked on our memories with a different direction, using our senses as a starting point. I listed out different fragrances and asked the kids to write what memories they inspire. Then I asked them to write about a song that reminds them of something, and write about their favorite place. 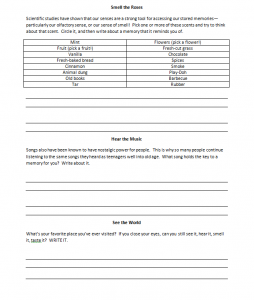 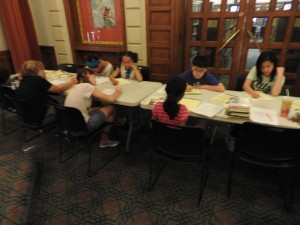 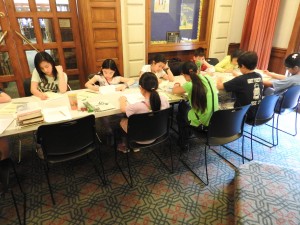 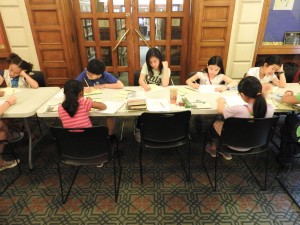 I was stunned by how well-traveled these kids were! They’d been to countries all over the world, and they’d done amazing things (one kid told us about his ziplining experience–I would love to do that someday!) They also called up deep memories within themselves that were rooted in something emotional, like the memory of meeting a baby sister for the first time, or the memory of seeing someone die in a car wreck. I hope the workshop left them confident enough to take that wealth of experience and feeling and turn it into great writing!

If anybody wants some feedback on their stories before turning it in for the contest, I’m available to give feedback as long as you send it to me by March 8th (so that I have time to look at it and get back to you before the March 10 deadline). I’m not a judge for the contest but that’s good because I can give some thoughtful attention and constructive criticism to anyone who asks without feeling like it’s “unfair” or something. 🙂