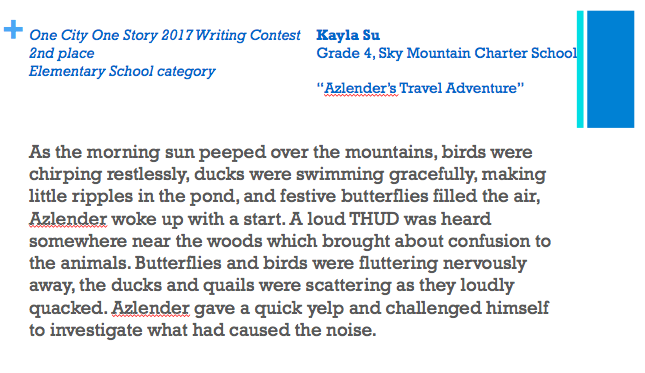 Summary:  Tired of his boring life in Avenlee, Azlender sets off on an adventure in the woods.

Once upon a time, there was a poor peddler who lived in a cottage. He often had to travel from house to house, selling goods. Often, his son named Azlender was forced to help his father by going out with him and helping him carry goods. Azlender thought this was a boring, dull and monotonous job. He often had greater dreams of traveling, exploring and being free, like a bird loose from its cage. That evening, after long and hard planning, he packed ten lollipops, a jar of honey, two loaves of bread, and five peaches, then stole out of the cottage into the clear, romantic moonlight of lovely Avenlee.

Outside the starry night in the vast theatre of countless twinkling stars, he bid a solemn farewell to dear old Avenlee and wandered away, mindless as to where he was going. Along the way, there were trees shaped like goblins and witches. The bushes looked like furry monsters with bushy tails. The owls, with their eyes gleaming, were even brighter in the darkness, and the howling sounds of the animals sounded like a scary ghost. Suddenly, a group of fireflies lit his way and everything went back to normal. With his heart lighter, he made his way through the leafy path and found a place to rest by a tree behind a lush bush. There, he slept soundly and cozily with lots of pleasant dreams.

As the morning sun peeped over the mountains, birds were chirping restlessly, ducks were swimming gracefully, making little ripples in the pond, and festive butterflies filled the air, Azlender woke up with a start. A loud THUD was heard somewhere near the woods which brought about confusion to the animals. Butterflies and birds were fluttering nervously away, the ducks and quails were scattering as they loudly quacked. Azlender gave a quick yelp and challenged himself to investigate what had caused the noise.

Off he trudged along the way with his head full of thoughts of whom he would meet and what the terrible noise was. He followed the narrow path and because he was not looking ahead, he ran into a huge, ferocious bear that roared and snarled at him. Azlender screamed, quickly took the jar of sweet honey that he had brought from home, and hurled it at the bear. Then, the bear stopped all his fearsome noise, dropped on its bottom, and started slurping the honey like it never ate anything in its whole life. Azlender then cautiously crept past it and advanced deeper into the woods.

He strolled on and soon encountered a bloody red sign that said Dead End. He stood stiff for a moment and wondered how he could get to the other side of the bank without being devoured by some hungry crocodiles and alligators down in the river. As he pondered over this thought, suddenly, like in a dream, he heard a noise… and behold! A whole line of monkeys came to form a bridge for him. “Oh my!” exclaimed Azlender as he excitedly crossed the bridge. Thankful that he was on the other side, he rewarded the monkeys with all his lollipops.

Azlender was almost out of the habitat of the forest animals when he saw what had caused the loud crash earlier. A thick oak tree about a million years old had been purposely chopped off. The trunk was like a wall, which prevented him from proceeding. He tried to think of how he could go to the other side of the trunk, but he felt his eyelids drooping, yet tried his best to stay awake. Soon, Azlender got discouraged for he could not think of any way, so he gave up and in no time at all he fell into a deep sleep.

The next day, ACHOO! Azlender woke up and realized he had sneezed. Azlender’s mind wandered off into the subject of how he could go to the other side of the trunk. Just then, a school of bees buzzed along and chased him. Azlender sprinted like a wild horse and ran for his life. He was chased here and there, right and left, and around and around. Surprisingly, the bees left him with a sting on his arm. Everything was still blurry after the great chase. He blinked his eyes twice and to his amazement, he found himself outside of the woods, no longer trapped behind the tree trunk. The bees had led him to an opening!

“Hello!” said somebody. Azlender turned around, surprised to find a very old man digging something mysterious. Azlender walked toward the man and the man asked him in a kind, choppy voice, “Please young lad, help me pull this thing out.” Azlender kindly accepted and began to pull with all his might, when KURTHUNK, a chest was yanked out. Azlender and the old man, who was called Master Ozlen, sat there with their mouths wide open. When they had recovered from their astonishment, Ozlen thankfully declared, “Because you helped me, young man, you deserve a reward.” He opened the chest and gave half of the riches to Azlender. Hence, Azlender returned home happily with his sack full of riches, and never again was his family poor.

Poetry about our moments in history — Kids’ Writing Workshop