This month our workshop focused on that cardinal rule of writing: hook ’em with your first sentence!  The activities we did got the kids writing actual first sentences and getting feedback from their peers.  Here’s the handout I gave the kids.  I’m a big believer in drawing inspiration from current, contemporary literature, so I have lots of examples from books in our collection.  I’ve got links to the books’ catalog records so you can request them and check them out!

There are obviously more than a few different ways to grab a reader and pull them in with your opening paragraph.  But here are some fairly common ones:

The house is falling in.

The house is falling in and Danny is falling, knees and elbows crumpling onto the floor, and an earsplitting crash is tearing through the air—that’s surely the roof, breaking in two, about to come pelting down on top of him.

—The Book of Storms by Ruth Hatfield

It was fun at first, playing house.

I made all my own meals.  Crackers and cheese, three times a day.

Wilhelmina knew that there were some houses that had glass in every window and locks on the doors.

The farmhouse in which she lived was not one of them.

—Cartwheeling in Thunderstorms by Katherine Rundell

On the morning I was scheduled to die, a large barefoot man with a bushy red beard waddled past my house.  The thirty-degree temperature didn’t seem to bother him, but he must have had a lousy breakfast, because he let out a burp as loud as a tuba.

Belching barefoot giants who look like Vikings are not normal in Belleville, Indiana.  But I didn’t really get a chance to see the guy closely.

At that moment, I, Jack McKinley, was under attack in my own bedroom.  By a flying reptile.

—The Colossus Rises by Peter Lerangis

How five crows managed to lift a twenty-pound baby boy into the air was beyond Prue, but that was certainly the least of her worries.  In fact, if she were to list her worries right then and there as she sat spellbound on the park bench and watched her little brother, Mac, carried aloft in the talons of these five black crows, puzzling out just how this feat was being done would likely come in dead last.  First on the list: Her baby brother, her responsibility, was being abducted by birds.  A close second: What did they plan on doing with him?

“We stay, we starve,” my father says.  Baba’s tone is as firm as my grip on my mother, Aai’s, wrist.

—Boys Without Names by Kashmira Sheth

“What is THIS supposed to mean?” my father demanded as I followed my brother through the front door, our arms full of boxes.  My father stalked across the entry hall, waving a slip of paper at me with his good hand.

We only have a few hours, so listen carefully.

If you’re hearing this story, you’re already in danger.  Sadie and I might be your only chance.

—The Red Pyramid by Rick Riordan

My name is Charlie Joe Jackson, and I hate reading.  And if you’re reading this book, you hate reading, too.

In fact, you do whatever you can to avoid reading, and the fact that you’re holding a book in your hand right now is kind of shocking.

I know exactly how you feel; I’m one of you.

Just remember: you are not alone.  We’ll get through this together.

—Charlie Joe Jackson’s Guide to Not Reading by Tommy Greenwald

We decided to play a trick on Carlos.  ‘Cause Carlos, he had problems.  Lots of ‘em.  Sometimes he was just too annoying, and by the end of seventh grade, we just couldn’t take it anymore.

—Carlos is Gonna Get It by Kevin Emerson

All I’ve ever wanted is for Juli Baker to leave me alone.  For her to back off—you know, just give me some space.

There is no lake at Camp Green Lake.  There once was a very large lake here, the largest lake in Texas.  That was over a hundred years ago.  Now it is just a dry, flat wasteland.

Rupert was down in the dumps.  Literally.

The garbage from Gliverstoll’s town dump sloshed around his ankles, and piles and piles of trash extended as far as he could see.

—The Only Thing Worse than Witches by Lauren Magaziner

I asked the kids which type of beginning was their favorite and then asked them to write two example beginnings for a story, from this list of eight types.  Each child shared their writing and everybody weighed in on which of the two beginnings they liked the best.  Our feedback was given very simply: each of the other kids held up either a letter “A” or letter “B” card to indicate their vote for which of the writer’s two beginning paragraphs appealed the most to them.  Then we talked about what specifically we liked about our choice. 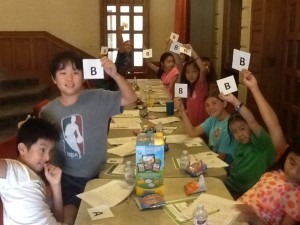 I think the activity was really successful–especially as it showed the kids that readers won’t always agree on what style of writing they like best, so you have to take feedback with a grain of salt.  But an overwhelming preference for A or B was a good sign that one might work better for the broad spectrum of readers out there.

The kids especially enjoyed talking about what they liked in each other’s writing, so I think overall it got a “thumbs up”! 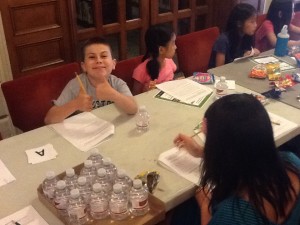 But the best is truly yet to come!  I’m excited to announce we’re going to have author Kirk Scroggs join us for our next workshop on July 31st!  Please call and let me know how many kids in your party are coming so I can make sure I have enough seats. 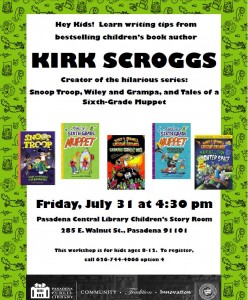 A Pig Parade is a Terrible Idea: Creative Writing for Beginning Readers

Where I Belong by Evelyn Chen