Today’s Kids’ Writing Workshop was all about discovering and unlocking our visions for the great work that we want to write.

First, we talked about some famous writers who gave the world a consistent vision. Charles Dickens wrote about poverty and greed in Oliver Twist and A Christmas Carol. Roald Dahl wrote about children overcoming abusive childhoods and finding better friends in Matilda and James and the Giant Peach.
Christopher Paul Curtis wrote about the discrimination faced by blacks throughout American history in The Watsons go to Birmingham–1963, Bud, Not Buddy, and Elijah of Buxton. Lois Lowry wrote about societies that lie to people and deny people their basic human rights in The Giver and Number the Stars. We talked about their contributions to literature and then tried to brainstorm what our own contributions might be.

We filled out a questionnaire to help us think about it. When you answer these questions, it really helps you to see what’s important to you and what you should be spending your time focusing on.

1. What angers you? Every super hero needs a bad guy or an evil plot to foil. Without one, the super hero has nothing to fight against. What’s your bad guy? What do you think is evil?

3. If you had all the time and money in the world, what would you do? Let yourself
explore all the infinite possibilities!

4. What change would you like to see in the world? If you could think of a single problem in the world – a big problem that you would like to help change before you die – what would it be? Is it poverty? World hunger? Bullying? Discrimination? What do you hope will be different about the world because you lived?

5. What would BLOW YOUR MIND? Take a few minutes to list five things that would totally blow your mind. If you still have time, keep going. What would be AMAZING or COOL?

(I adapted these six questions from a list of ten written by Todd Henry at The Accidental Creative.)

Then we set about writing stories inspired by those answers to our questionnaire. Not everybody wants to share, but the ones who did wrote really cool stuff. Several of their stories were inspired by younger siblings, which I think is cool because it’s natural to start making your own stories by telling stories to or about your family! Children wrote about overcoming obstacles like rude or harsh criticism. They wrote about time machines and magic things and waking up in the White House–stuff that would “blow their mind”! One wrote about a slave girl whose mother had died. It sounded really sad. I LOVE hearing everyone’s stuff when they share and I welcome kids to email their stuff to me if they want feedback more in private.

Finally, I gave the kids a homework assignment from the new book by Gail Carson Levine called Writer to Writer: From Think to Ink:

• For the next week, wake up fifteen minutes to an hour early and write right away, before you’ve had breakfast or changed out of your jammies, and especially before you read anything, preferably before you speak to anyone. With luck, your mind will be empty of your conventional way of thinking and surprising ideas will pop up.
• For the following week, set aside a particular fifteen minutes a day for writing. No matter what may come, you have to write during that time.
• For the last week in this program, write for fifteen minutes at different, random times. The purpose of this is to accustom yourself to writing whenever possible in any circumstance and not to depend on your mood or on a particular place. If you can write only in your bedroom or only when there’s absolute silence, your opportunities narrow. I write in airports, on planes and trains, in hotel rooms. In an airport, for example, under a giant TV blasting endless headlines, weather, and commercials, I can still write. I’m irritated. I wish the thing would shut up, but I soldier on.

Let’s try to do this and see how it goes!

Now some pictures to show what a full house it was yesterday–lots of new faces and I hope to keep seeing them! 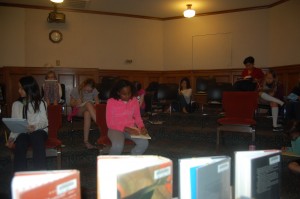 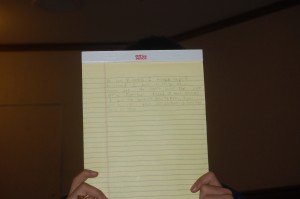 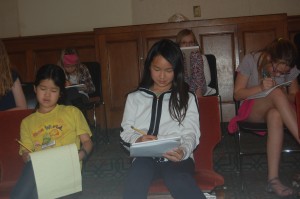 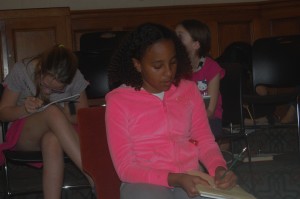 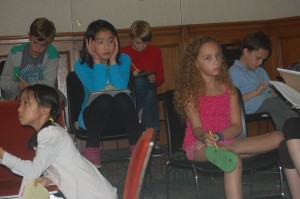 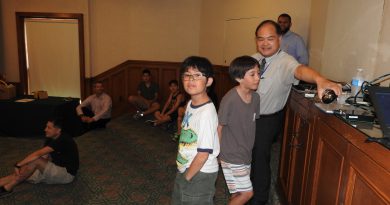