On Saturday, November 23, the Central Library hosted a Shared Storytelling workshop for kids ages 8 -12.  We had a lot of fun making stories together in different ways.

And here are the wonderful works of art created by our program participants Alicia, Ashley, Chaebin, Lola, Meredith, and Michael:

Next we warmed up our storytelling muscles with “One-Word-at-a-Time” stories.  For these, players each say one word after another to create a final story.  Here are the stories out six participants told:

Story #1
There was a zombie named Zombie Arner who was dead and he suicided JFK and there was zombie brains.

Story #2
Once upon a time there was kamikaze who are a dare name oompa-loompa that they are deviled crashed the Titanic.

Story #3
Zombie was an octopus FBI person who was a alien half oopma-loompa deadly and dead.  He hypnotizes eggs and pigs. 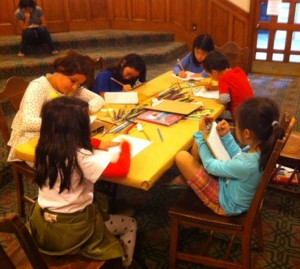 We finished up the program by creating exquisite corpse stories, with kids writing for three minutes.  At the end of three minutes, they hid all of their story except the last line.  Then the passed the stories on to the next author.  Here are the final works of art: 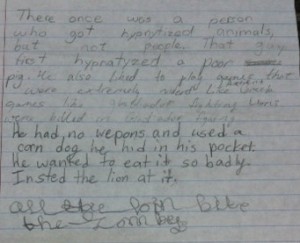 There once was a person who got hypnytized animals, but not people.  That guy first hypnatyzed a poor pig.  He also liked to play games, that were extremely violent.  Like Anctient Greek games like gladiador fighting.  Lions were killed in Gladiador fighting.  He had no wepons and used a corn dog he hid in his pocket.  He wanted to eat it so badly.  Insted the lion at it.  All the lion bit the zomby.

On Saturday, there was a guy named Ommpaa-LOOMpa.  He liked Ommpaa-LOOMpas alot of course.  He also had a pet named Ommpaa-Loompa.  He also visits Willy Wonka’s Chocolate factory for a Oompa-Loompa and is like Vercurra, a naughty girl.  He wants everything and is a first-class criminal who robbed a hobo.  He stole his cart from an alley.  The hobo got mad at stole it back.  Now the cart stealing guy is in jail!!! DONE

Ther was pince named poope! and princess named peepe! Their wus a craze zombie colde werd.  his mom did not like him.  She wanted to take him to the zoo so he can get lost and cry.  After that she took him to the zoo and he almost got eaten by a lion.  But they they safley walked home together and now I should say Bye Bye to you now!

Their Their was a hrose they jump, sneezd, and twist.  When they twist into weird triangles.  He liked to turn into triangles of course.  He one day there was a man coming down the sidealk.  He likes pigeons & is slightly crazy.  Well, he first stole someone’s valuable necklace when he was 5.  The police caught him & he was put in prison for life.  THE END!!! The end.

There was a black dot who ate chicken wings.  He got really fat after a period of time.  He soon ate chicken wings every second.  All the zombies was all walking in the house.  Their was a ded wum he was one werd he was realy werid and bad so he, hited, kiced, and cliped things on his mom.

We all had a lot of fun drawing, writing and laughing together!  These are also great activities to do at home as a family.  If you’d like to learn more about surrealism & exquisite corpses check out some of these books from the library.  Just click on the book to find it in the library catalog. 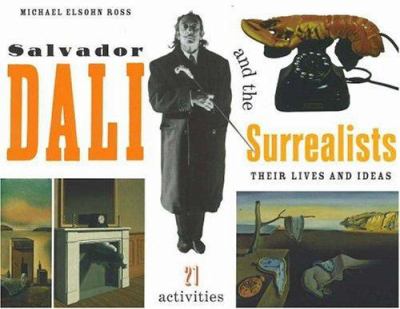 If you want to join us for more fun at the library, our next program for 8-12 year olds is Saturday, December 7 at 11am.  We will be making Window Art!  Call the Central Library’s Children’s Desk to Register.