On July 4, 2014, the Lopez family woke up and decided, “Let’s go to the beach to celebrate America’s birthday!”

I didn’t know what was going on, but I was excited. I immediately asked, “Can we invite Maggie?”

Maggie was my best friend in my third grade class at Field Elementary. She had long black hair and black eyes. She was about the same height as me. We had a lot of things in common:  we were both funny, we loved to talk, and we liked Minecraft, Pokémon, and dinosaurs.

My mom called Maggie’s mom and she said that Maggie was available to go on the play-date. My smile was so big, it covered half of my face!

While my father and mother began packing things in the SUV, I gathered my bathing suit, toys to play with in the sand, a blanket, and a few snacks to eat.

We then drove over to Maggie’s house. She was waiting at the front door. She was wearing blue shorts and pink tennis shoes. Her eyes lit up when she saw us.

In the car, we talked about stuff, while my dad played festive mariachi music on the iPod.

Soon, we got off the freeway and approached the beautiful blue water of Santa Monica Beach. “Look!” shrieked Maggie. “The beach! We’re here!”

I was so excited! We tumbled out of the car and waited impatiently for my parents to get everything out of the trunk. Then we ran down to look at the beach. The cawing seagulls flew over the sparkling waves, while the ocean breeze caressed our faces, leaving the taste of salt on our lips. We were in heaven!

We then set up a little base to play in the sand. We put down the blanket and placed an umbrella next to it. Ta-da! Our little beach base was done! Then we went to change into our bathing suits. We ran back and jumped into the cool water. Splash!

After playing in the water for thirty minutes, we went back to the base to dry off, eat some snacks, and rest for a bit. It was a sunny day, and it felt good to feel the warm sun on our wet bodies.

Then I looked up and saw a crowd of people gathered on the shore near the side of the pier. I shook Maggie and yelled, “Look! Something’s happening over there!” We ran over and made our way through the crowd. I saw a sea creature lying on the wet sand. Maggie gasped and covered her mouth with her hand. Was it a seal? Or a really big fish? Was it dead? It looked like it. We dashed back to my parents and told them about it. They said it probably got washed on shore or caught by a fisherman. We felt miserable.

My dad then opened up the cooler and handed us two ice-cold, glass bottles of Coca-Cola. We drank it, and we sat down to build a sand castle.

Afterwards, we changed out of our bathing suits and started walking towards the pier. On the way, we saw this really creepy, cool guy with a snake on his shoulders! It was a really fat snake, green and yellow with black spots! I think those are called pythons. Or was it a cobra? Anyway, the snake was all like crawling on his shoulders and stuff, and I’m not that fond of creepy, crawly, and slimy things…

Suddenly, the snake-man hissed, “You two girls-s-s! Would you like to hold the s-s-snake?”

I was terrified! I could tell Maggie was, too! We slowly backed up and walked away. Apparently, the guy’s blind or he just didn’t care because he didn’t call after us! We sprinted past the public showers and up the wooden steps to the pier, all out of breath.

We then started to walk around, looking at the games and rides.

“Which ride do you wanna go on first?” I asked Maggie.

“Hmm….what about the one with the dragon ship that rocks back and forth?” she replied.

I saw some kids screaming on board. They even had to stop the ride to let one kid get out because he was so traumatized!

“I don’t really wanna go on this ride…” I whined.

“O.K. that’s fine,” Maggie agreed. “Actually, now that I think about it, this ride does look scary!”

So, we decided to get on the rides that weren’t so extreme, like the airplanes that went round and round, and the cars that you pretend to drive. All the fun (and safe) stuff!

It was almost dusk. We watched the sunset as the twinkling lights on the Ferris wheel turned on. Then I felt my father’s hands on my shoulders. This was the moment I had been dreading: time for the play-date to end.

As we drove home in the darkness, I looked out the window and saw the colorful fireworks going off in people’s front yards. Maggie’s face would light up and then fade in the shadows.

At the time, I didn’t know that this would be our last play-date together. At the end of the school year, Maggie left to go to another school. I remember I felt like crying because she had been the first friend I had made at school, and I would miss her so much.

Now it’s two years later, and I’m in the fifth grade at Field. I haven’t seen Maggie since then because we lost contact with each other. I feel brokenhearted over that, but I’ll always smile when I remember that thrilling day when two Best Friends Forever went to Santa Monica Beach. 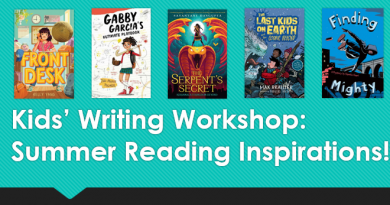 “The Journal” — story by Lauren Sales