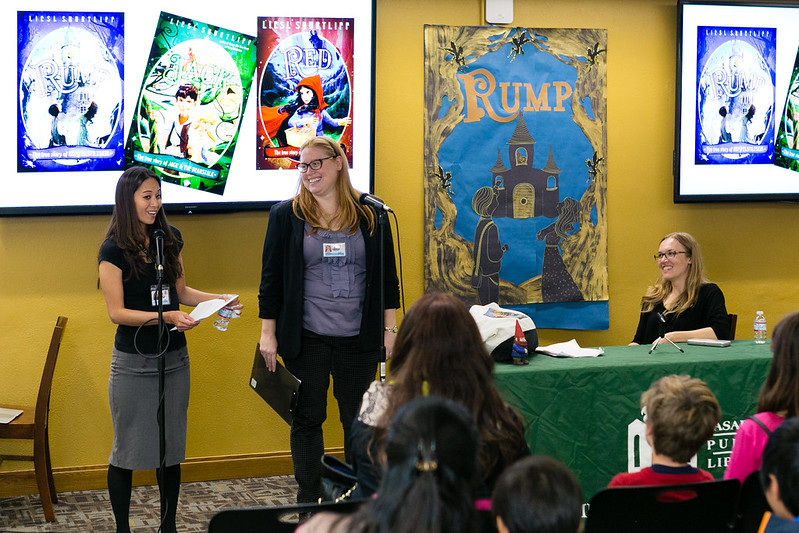 On Tuesday, November 17, Pasadena Public Library celebrated this year’s Young Readers League selection, Rump: The True Story of Rumpelstiltskin (Knopf) by Liesl Shurtliff.  In partnership with Vroman’s Bookstore, Young Readers League is designed as a community-wide reading celebration by championing and geeking out over a single book.

PPL and Vroman’s offered over twenty tie-in events—spread out amongst eleven sites—leading up to the author’s visit.  Liesl Shurtliff visited several schools before her final event at Pasadena Central Library.  During Tuesday’s event, after an insightful presentation from the author and a hilarious live reading of Rumpelstiltskin—with audience participation—guests then met the author, got their books signed, snagged some prizes, had a turn or two in the photo booth, munched on themed snacks, and completed a scavenger hunt.

The Young Readers League is estimated to have reached about 1300 participants (more on the entire program later).

More information can be found on our brochure:  http://cityofpasadena.net/uploadedFiles/Departments/Library_Kids/PDF/yrl%202015%20brochure%20final.pdf 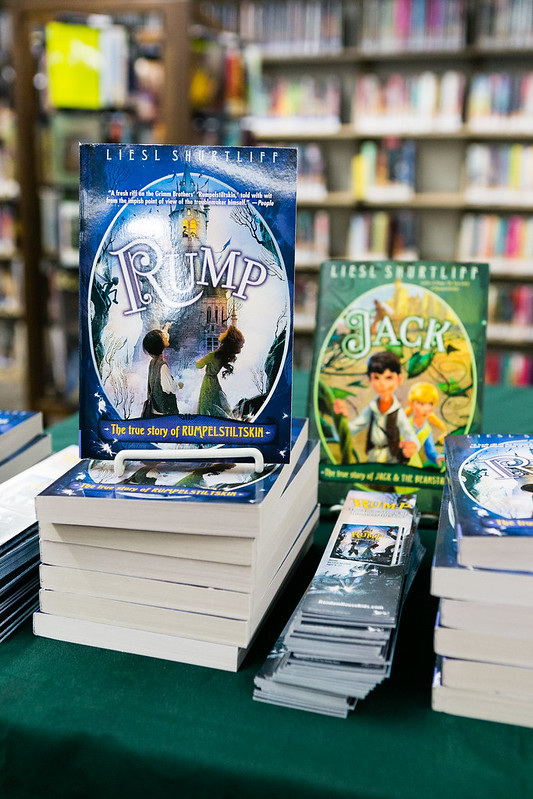 Liesl Shurtliff is the author of Rump: the True Story of Rumpelstiltskin, Jack: the True Story of Jack and the Beanstalk, and Red: the True Story of Red Riding Hood, which will be published next Spring.  Liesl grew up in Salt Lake City, Utah, and is the fifth of eight children. She loves dancing, singing, playing the piano and reading books by Judy Blume, Beverly Cleary, Roald Dahl, and of course, fairy tales.  She read her copy of Grimms’ Fairy Tales so often the binding wore through.  Today she lives with her husband and three children in Chicago, which she says, is a wonderful city except that it is decidedly flat and very cold in the winter. When she writes, she often wanders back to her childhood and gathers the magic that still remains. She hopes to share that magic with children everywhere. 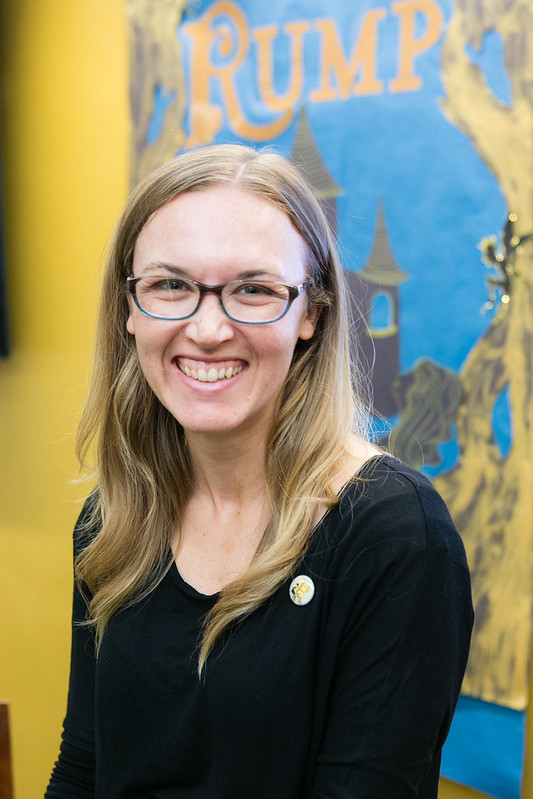 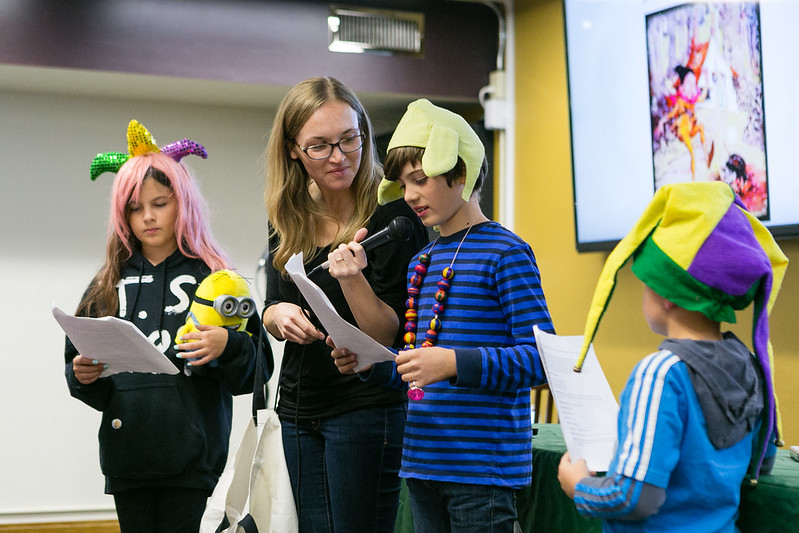 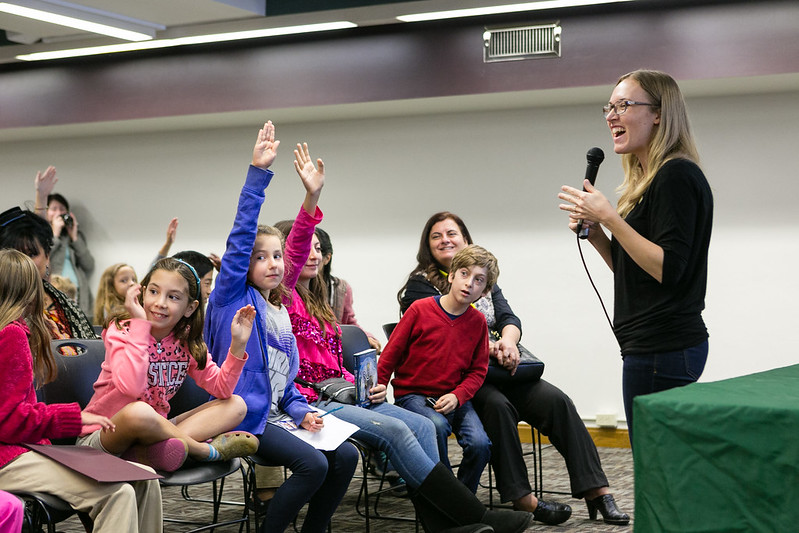 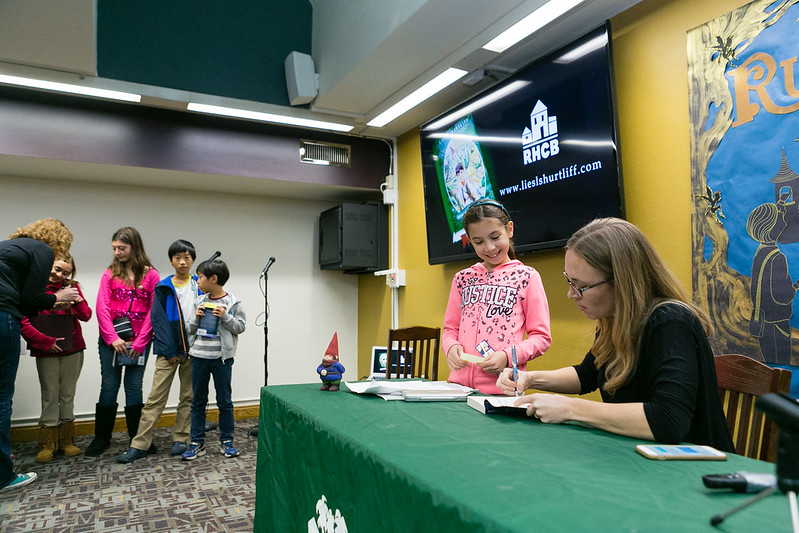 To a captivated audience, Liesl showed a trailer of the next book in the series, Jack: The True Story of Jack and the Beanstalk.

Photos in this post and the photobooth was by Russell Gearhart Photography. 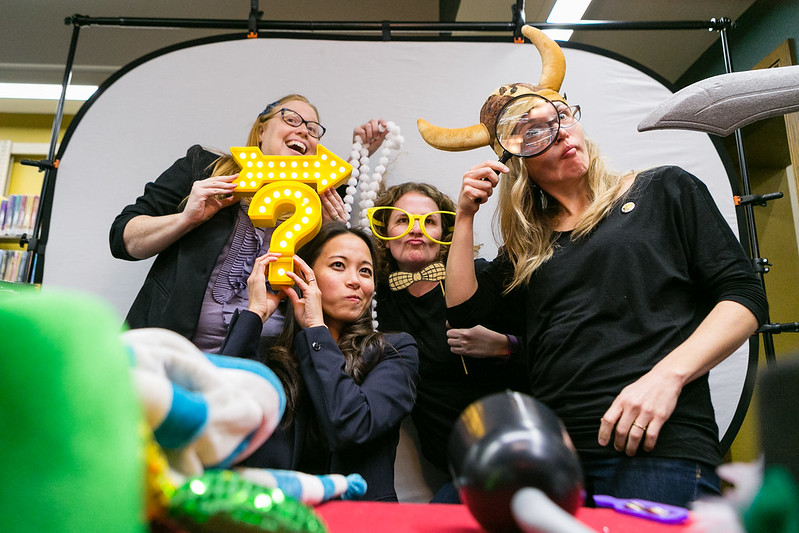 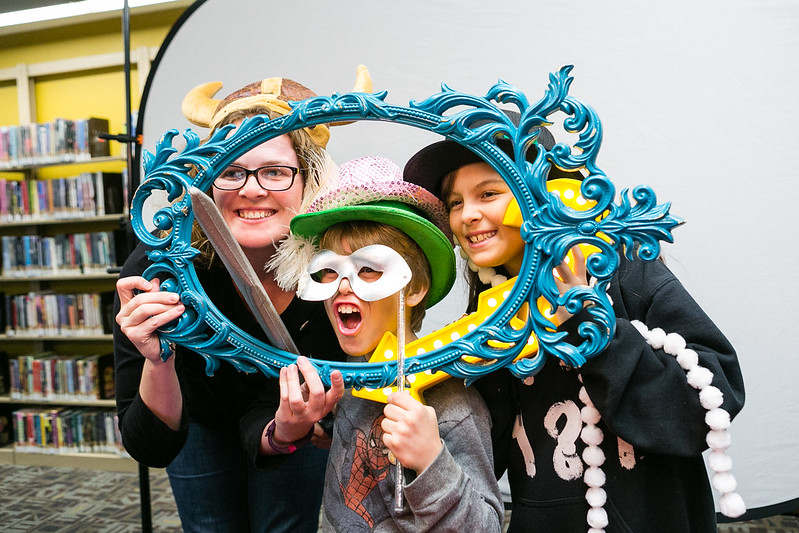 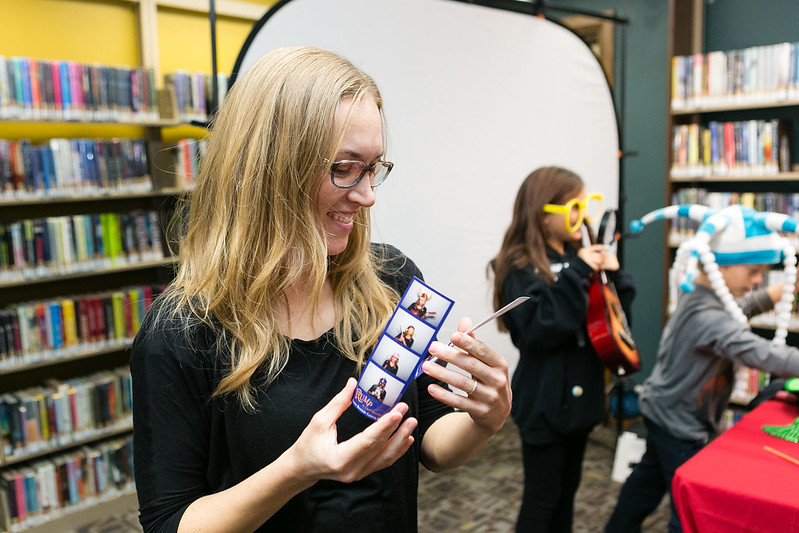 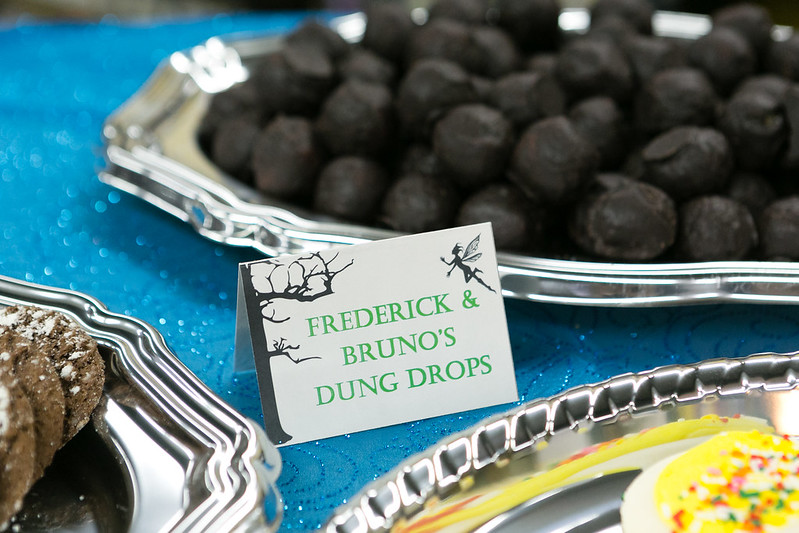 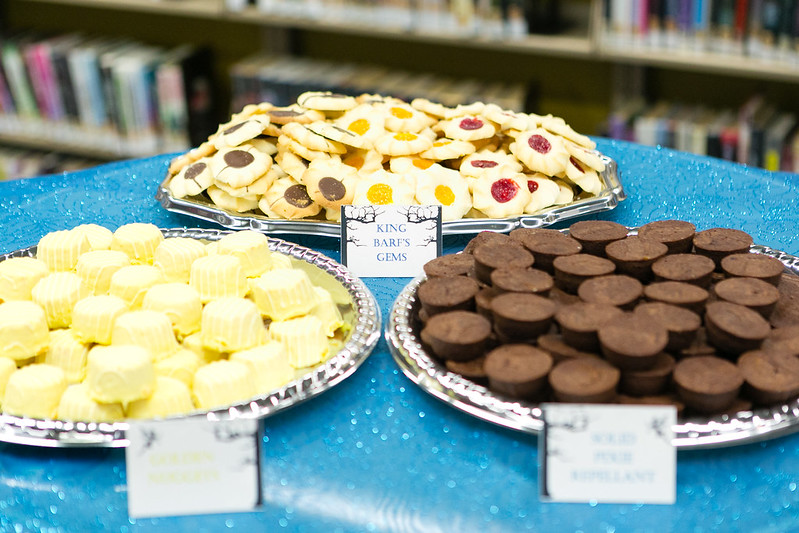 The Rump Hunt was a self-directed clue hunt. Prizes were given to everyone who finiished.

In this bag are clues.

Puzzles that will reveal letters or words that will spell out a phrase.

There are two clues that require you to look elsewhere.

Everything else you need should be in this bag.

This bag should contain:

When you are finished with your clues, fill out the golden ticket included in this bag.  Then look for the treasure chest box and turn it in to the volunteer. You will get a prize. 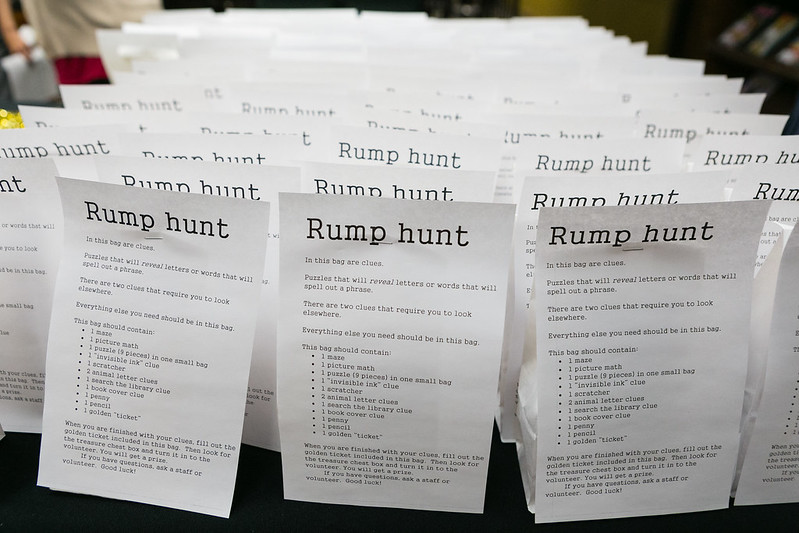 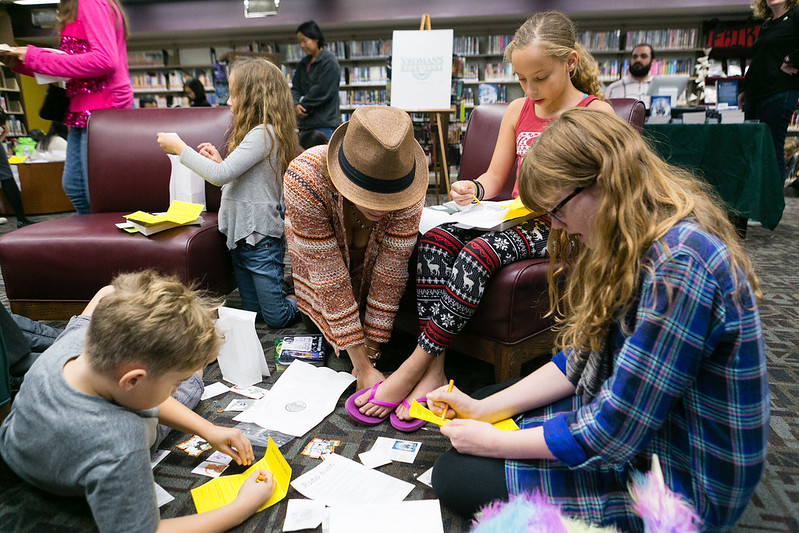 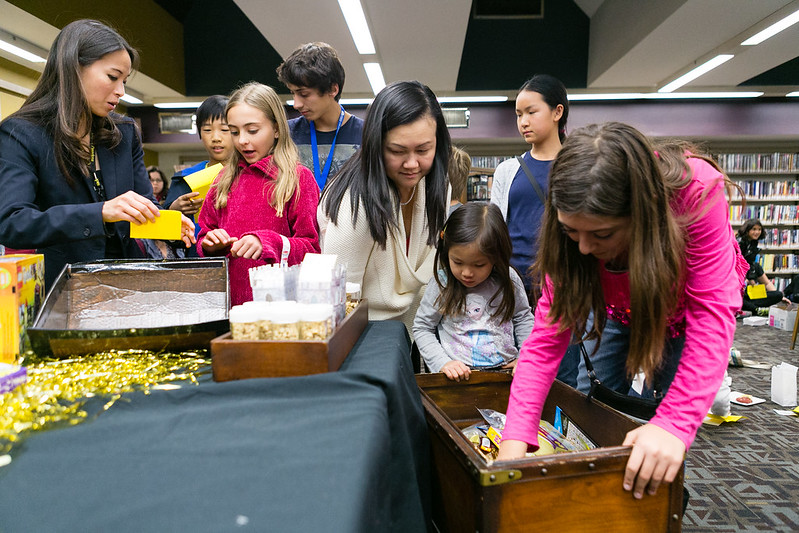 This event was organized by Librarians Jennifer Driscoll and Jane Gov with special thanks to Heather Marquez (from Vroman’s Bookstore) and of course, Liesl Shurtliff.

Music and Movement with Dayita Datta