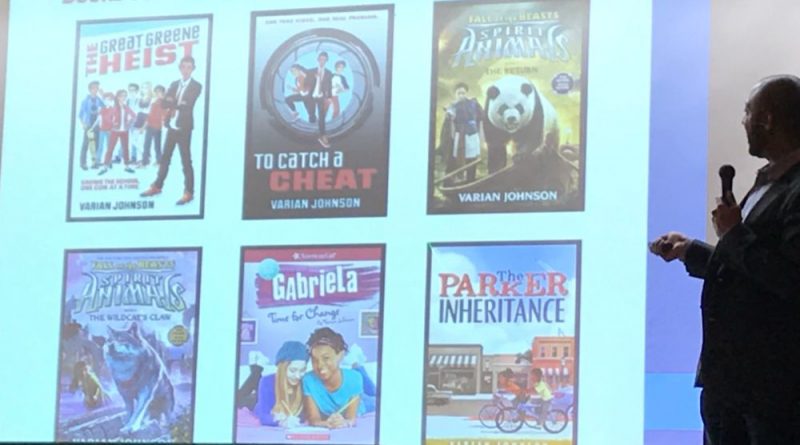 An Afternoon with Author Varian Johnson

Meet Varian Johnson, author of The Parker Inheritance, our 2019 Young Reader League selection. Participants had their books signed and joined in a scavenger hunt, crafts, and viewed art contest submissions. To view a list of the winners for the art and writing contests, click here.

About The Parker Inheritance

Twelve-year-old Candice Miller is spending the summer in Lambert, South Carolina, in the old house that belonged to her grandmother, who died after being dismissed as city manager for having the city tennis courts dug up looking for buried treasure–but when she finds the letter that sent her grandmother on the treasure hunt, she finds herself caught up in the mystery and, with the help of her new friend and fellow book-worm, Brandon, she sets out to find the inheritance, exonerate her grandmother, and expose an injustice once committed against an African American family in Lambert.

Varian Johnson is the author of nine novels, including The Parker Inheritance, which was named a 2019 Coretta Scott King Honor Book and a 2018 Boston Globe-Horn Book Award Honor Book among other accolades. His middle grade caper novel, The Great Greene Heist, has been named to over twenty-five state reading and best-of lists. In addition, Varian has written for the Spirit Animals: Fall of the Beasts middle-grade fantasy series as well as novels and short stories for YA audiences.

Varian was born in Florence, South Carolina, and attended the University of Oklahoma, where he received a BS in Civil Engineering. He later received an MFA in Writing for Children and Young Adults from Vermont College of Fine Arts, and is honored to now be a member of the faculty. Varian lives outside of Austin, TX with his family.

The Secret — a story by Aaron Young

The Time Tempest — a story by Ellis Gruesbeck