My name is Stella Grace Paz. Like the other 7.3 billion people on this Earth, my name means something special and unique. The dictionary defines “Stella” as a dream girl; a fairy: queen of all the stars. But, my name is more than that–it is a legacy of family and culture.

Stella Grace is a combination of my grandmothers’ names and my great grandmother’s name. I love being the only one out of my grandma’s 8 granddaughters to share her name. When I was in my mother’s womb, she told my parents that she felt left out that none of her grandchildren were named after her. Her two grandsons’ middle names were Nash, my grandfather’s name, but none of her 6 granddaughters had her name. She would be so honored if my parents named their baby after her and they agreed.

After deciding my first name, my mom thought about a middle name. One day, my mom told my dad that “Grace” sounded nice with Stella. That was when he told her that his grandmother’s name (my great grandmother) was Gertrude, but everyone called her Grace. He loved the name Stella Grace, and that was how my parents named me!

Stella Grace can also be translated into Chinese. My Chinese name is Graceful Star, or  . Being half Chinese, my name connects me to that culture and to me maternal grandmother who speaks very little English. In fact, I am learning Chinese to communicate with  her.

Stella Grace Paz. I feel very special for having such a meaningful name. It is a legacy to my ancestors and my cultures. I am so proud.

Everyone’s name is special. In the spirit of this year’s Young Reader’s League selection, Rump by Liesl Shurtliff, we are holding a writing contest focusing on the meaning of names. In 300 words or less, tell us something about your name. This could be how you got your name, what it means to you, or what it means in general. Anything about your name is fine. Winners will receive a gift card to Vroman’s Bookstore and have their entry featured on the library’s blogs. 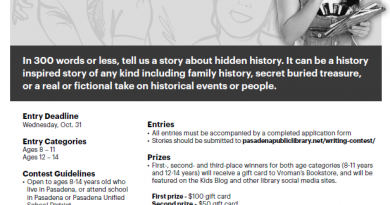 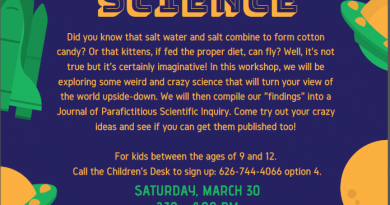