On Saturday, July 13, about a dozen tweens gathered for the Edible Book Cover Challenge.  Look below to see what they came up with.

Goal of the program:

Kids (recommended tweens grades 3-6 or older) re-create book covers or characters from food.  The food is their color; a plate is their “canvas.”  The goal is to get kids thinking about how to use shapes and colors to create something whole and also to think beyond the picture on the book.  Some of the kids struggled with this concept and decided to copy one of the provided examples; others came with a book in mind and recreated scenes from the story itself.  Both ways are equally inventive because the foods available were not the foods provided, and they had to find other ways of creating the “book cover.”  Some kids decided to use entire candy or cookie pieces while others broke apart and reassembled.

The foods were set out on top of the table they were working on.  Kids sanitized their hands with wet naps before starting and were told not to eat anything until the very end of the program.  Each child was given a square plate and was then free to start creating.

Kids tend to go for the most colorful foods like candy and cereal, but the most useful are actually the fruits and vegetables because they can be cut and shaped to a closer match.  Providing a variety of both worked well.

The kids had a lot of fun and parents enjoyed watching the creations.  Some kids that struggled with the concept early on were rather proud of their work at the end.  Some parents mentioned that this would be a great activity for a child’s birthday party or even for teens and adults.

It was interesting to see their interpretation of particular characters, book covers, or actual scenes from the books they read.

Perhaps next time, we can include more instruction and ideas for the kids.  I could show illustrations from books and ask kids to identify shapes from the picture.  Then identify which smaller shapes could be placed together to make a larger item–such as a building or clouds.  Then ask how the image can be created using foods (i.e. half moon shapes can be orange slices, triangles can be Doritos chips).

Having adult artists on hand may have also been useful; artists can give kids ideas and suggestions.  Having parents nearby can also be helpful and encouraging, but some kids this age would rather create something on their own, so parents sat in a group nearby where they could observe their child’s progress. 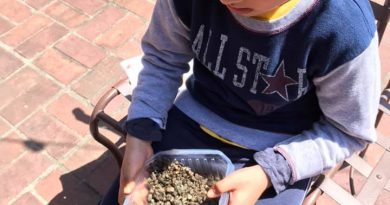