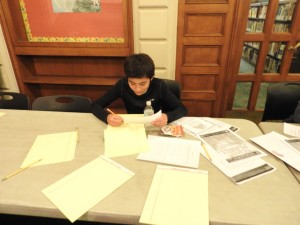 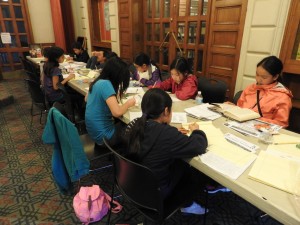 On Friday, February 11, kids between 8 and 12 came to Central Library to write stories about spies and encoded messages. First we read excerpts from a couple great stories involving codes: Ruby Redfort Take Your Last Breath by Lauren Child, and The Spotted Dog Last Seen by Jessica Scott.  Ruby Redfort is a code decryption genius, a kid hired by a super spy agency at the center of a series of middle grade spy novels.  The Spotted Dog Last Seen is a book with a premise somewhat similar to Holes by Louis Sachar, in which kids are doing manual labor for an unknown purpose.  The graveyard and the people who run it are a mystery to the kids. I had these books set out on a cart along with other books like Spyology: The Complete Book of Spycraft by Spencer Blake, Top Secret: A Handbook of Codes, Ciphers and Secret Writing by Paul Janeczko, and The Journal of Beatrix Potter. I asked kids which one of these books didn’t belong; they said the Beatrix Potter one, of course.

But it was a trick question 😉 I showed them that Beatrix Potter created her own code for writing her journal in, and gave them a copy of the code key, copied from the book. Then I had them decrypt some secret messages written in Beatrix Potter’s code. The secret messages were all spy-themed, and kids were asked to write a story about what the message means, what the spy’s mission is, and what the spy’s next steps will be. 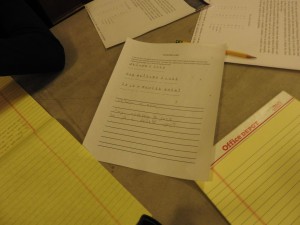 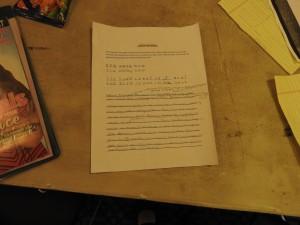 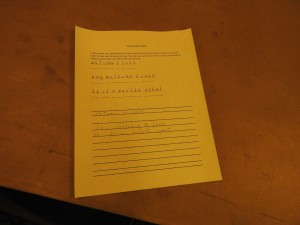 Here are some videos of kids sharing their spy stories:

The next activity allowed the kids to choose from a set of different codes, including Egyptian hieroglyphics, the Freemason code, the Star Wars code, and the Morse code. They had to write an encrypted message and then trade with another child and decrypt each other’s messages. Most of the kids chose to write joke starter lines, which was the perfect length for this exercise. They wrote that starter line in the code, and then when the other kid decrypted it, they gave the punchline out loud!

Here are some of the kids’ favorite jokes they shared:

Here a child wrote a secret message to her sister in Morse code: 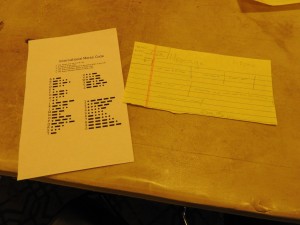 And here is a joke that was written in Freemason Code, and the student shares the punchline with me:

And by the way–the idea for writing joke starter lines and then declaring punch lines… That wasn’t me! That was all the kids’ idea and it was such a good idea I think I will use it again 🙂

Our next writing workshop for ages 8-12 will be April 6th (a Wednesday!) at 4:30 pm. We’ll be led by the author Rachel Searles, who writes an edge-of-your-seat action-packed sci-fi series called The Lost Planet! We have the first book available for checkout. We will be raffling off a few copies for kids to take home signed by the author. Should be an awesome workshop! Sign up by calling 626-744-4066 option 4 or email me at anhurtado [at] cityofpasadena [dot] net. 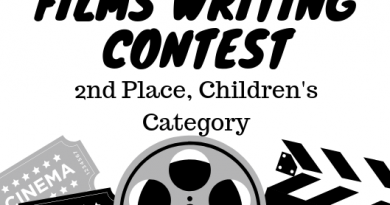