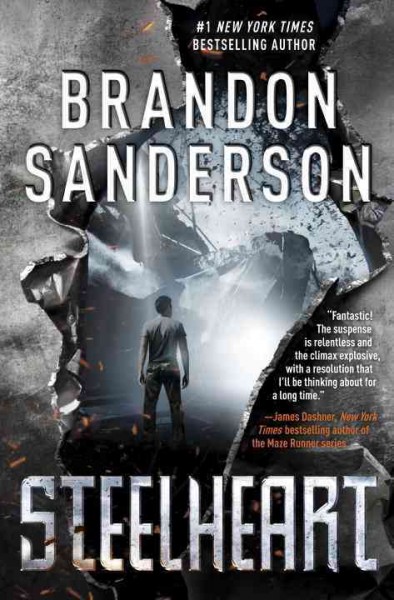 Summary: Ten years ago, Calamity came. It was a burst in the sky that gave ordinary men and women extraordinary powers. The awed public started calling them Epics. But Epics are no friends of man. With incredible gifts came the desire to rule. And to rule man, you must crush his will.

Nobody fights the Epics…nobody but the Reckoners. A shadowy group of ordinary humans. They spend their lives studying Epics, finding their weaknesses, and then assassinating them.

And David wants in. He wants Steelheart — the Epic who is said to be invincible. The Epic who killed David’s father. For years, like the Reckoners, David’s been studying, and planning — and he has something they need. Not an object, but an experience.

He’s seen Steelheart bleed. And he wants revenge. – From the publisher

For December, the YA Book Club gathered to discuss Steelheart by Brandon Sanderson the first book in the Reckoners series. Like The Hunger Games, certain circumstances and situations in the book reflected our reality. Steelheart’s hunger for power is something we have witnessed in our world today. The book itself, felt too focused on David, which was emphasized through the first-person narration. By focusing so much on David, we felt the the author missed opportunities to better develop other characters. If David observed others more than himself, especially in the end, it would have emphasized his own development and change throughout the story. Our first impressions of David was that he was arrogant and annoying, but also that he did some questionable things throughout the story to get the results he wanted. But, without the controversial and admittedly interesting actions he took, the story would have been less interesting.

YA Book Club would not have taken such actions while being an amateur as he was and would have thought more on our actions.  Some of us would have just stayed home in the first place, not understanding why someone would let themselves be so corrupted by revenge. His determination was not relatable to most of us. If his character displayed more doubt it would have made his character more realistic. But, since we were never in the same situations David was in, we weren’t sure whether we would take the same borderline suicidal risks. Although many of us felt like the story lacked in important elements, character development and relatability, the story did hold capturing, abstract, and humorous though somewhat clique ideas. Some of us would be interested in reading the rest of the series to see if it fills in the elements we felt it missed. Overall, YA Book Club gave Steelheart an average of 3.8/5 stars.

If you enjoyed Steelheart some recommendations from YA Book Club are Percy Jackson, Mist Born, Maximum Ride, Daniel X, Ready Player One, The Leveller and Eye of Minds.

Find this book in our catalog: Steelheart