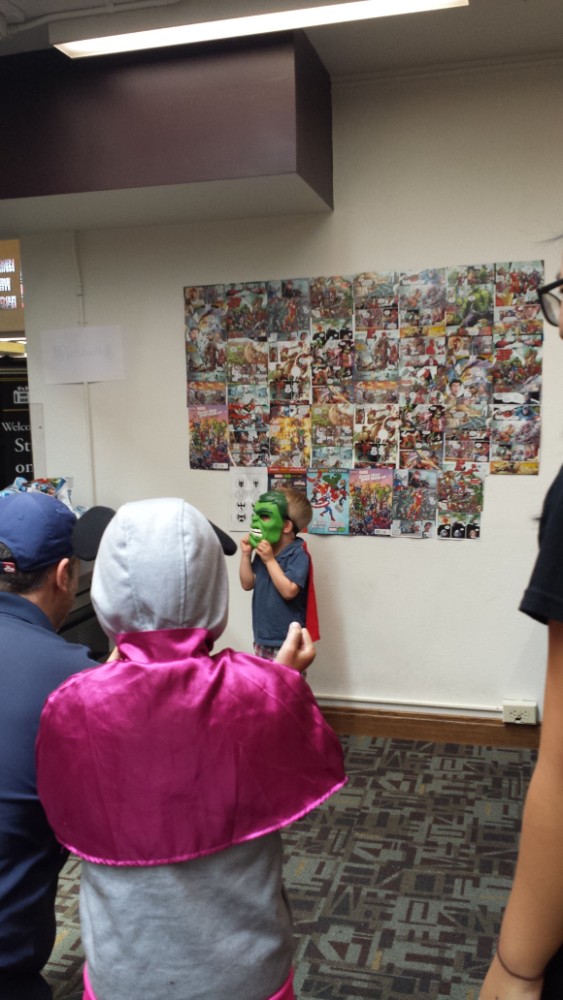 The Pasadena Central Library’s summer party is a themed fandom party complete with themed decorations, activities, and party favors. The Teen Advisory Board (TAB) typically decides the party’s theme; this year, we selected the Avengers. Everyone on TAB contributed ideas for easy Avengers-themed party decorations and fun activities. TAB members also decided upon four main Avengers characters to use as colors for decorations: Hulk (green), Black Widow (black), Captain America (blue), Thor (silver), and Iron Man (gray). The party was on July 29th from 2:00 to 4:00 pm, and was held in the studio on the fourth floor. TAB members who were volunteering for the party showed up at 1:00 pm in the studio to help set up decorations, tables, and food. The day before, we made a ‘comic book wall’ that we used as the backdrop for a photo booth. For the other decorations, we hung up lanterns, filled goodie bags, and arranged tables around the room with colored tablecloths to set up stations. The stations included cookie decorating, mask-making, a photo booth, and tables with food. About halfway through the event, we paused the activities for a few minutes to announce that kids could participate in a scavenger hunt, in which ‘Infinity Stones’ were hidden all around the library. Those who wanted to participate were given slips of paper showing which ‘stones’ to look for. While the scavenger hunt was occurring, the activities at the stations kept running. Those who found the stones won bragging rights, and then, half an hour before ending, we began a trivia game. Kids who wanted to play the trivia game gathered on one side of the room as TAB member Sophie read off trivia questions from her phone. The party ended around 4:00, and TAB members helped clean everything up until 4:30.
Teen Advisory Board members who facilitated the event met up twice beforehand (aside from the monthly TAB meetings) to discuss and plan how the event would run. We also had a group chat where we texted each other ideas and supplies we might need. TAB Members McKenna and Sophie initiated most of the conversations, and compiled a list of necessary supplies and prices on a Google doc to estimate how much the event would cost in total. A week before the event, TAB members made the ‘infinity stones’ and decided where to hide them. Everyone had conflicting schedules, so not everyone was there each time, but most were present during the actual event. One mistake we made (which we realized afterward) is how much we overshot on the amount of cookie-decorating ingredients needed—even though Ms. Jane cut down our list, we still had a ton of supplies left over. We lacked organization as well, as the trivia and scavenger hunt could’ve been more thoroughly planned out. Other general observations we learned from were:

Altogether, we volunteers agreed that the event was successful, and that Sophie and McKenna did a wonderful job leading the party-planning team. As mentioned before, the turnout was larger than we expected, which was great, and kids were enjoying themselves at the event with all the activities we offered. The two things TAB could certainly approve upon is organizing the big activities, like the scavenger hunt and trivia. Meeting twice before the event was necessary in order to have everything in order, but hopefully, in the future, everyone will be able to make it to both meetings so that TAB is on the same page. Leading the summer party was a learning experience and really taught everyone the importance of communication and time management: we all had to decide what events were happening when, if we wanted to put kids into groups, if we wanted to keep stations running during the scavenger hunt and trivia events, and so on. Now that the Teen Advisory Board has led this event, we know what areas to improve in the future so that the party can be more successful next year, and in the years to come.