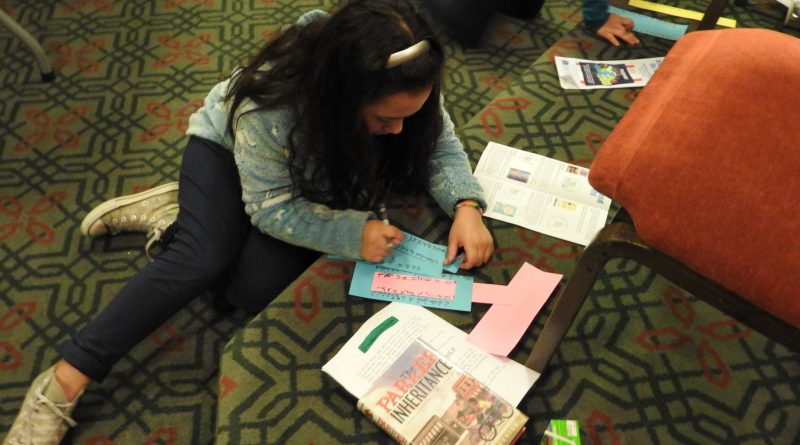 Last night we had our first Read Around the World book club meeting, and our book was The Parker Inheritance by Varian Johnson. We had a wonderful group!

When the kids and parents entered, I gave them a packet: 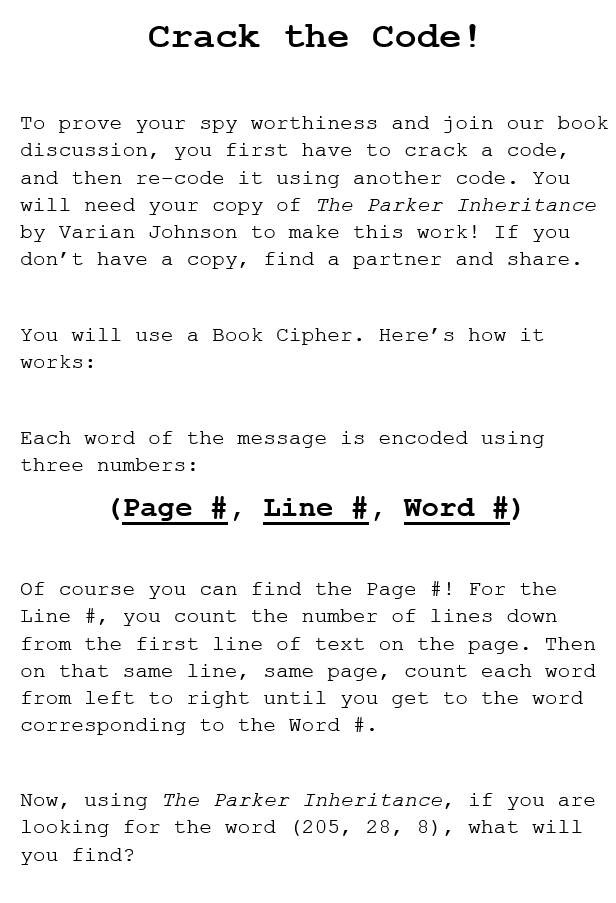 We did that first page together–the word is SPY! 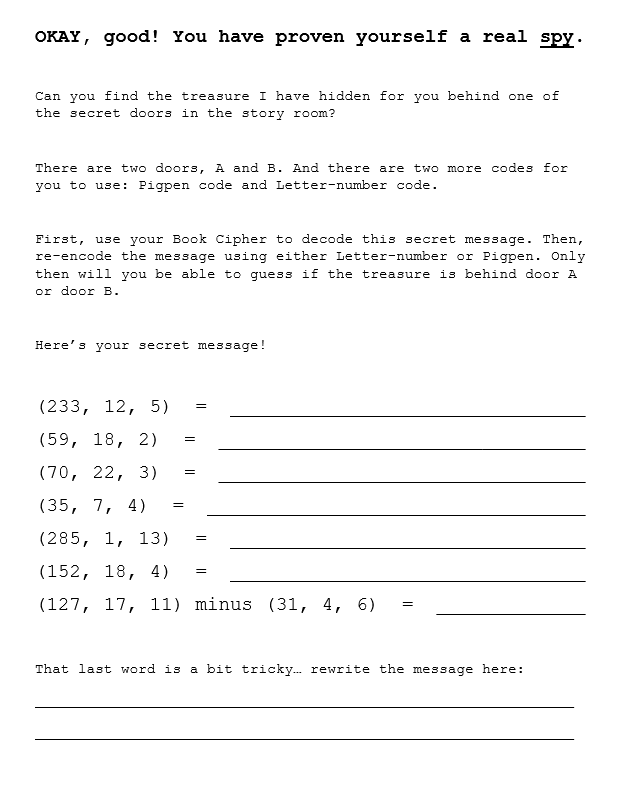 It wasn’t easy to do this part, and I went around the room and tried to catch any mistakes I saw so that all the kids had a good chance of figuring out the actual secret message.

The next step involved some extra room setup. Before the program, I placed our snacks behind one of the two secret closets in the room. I marked one door “A” and one “B.” Each door contained a message in a different code. 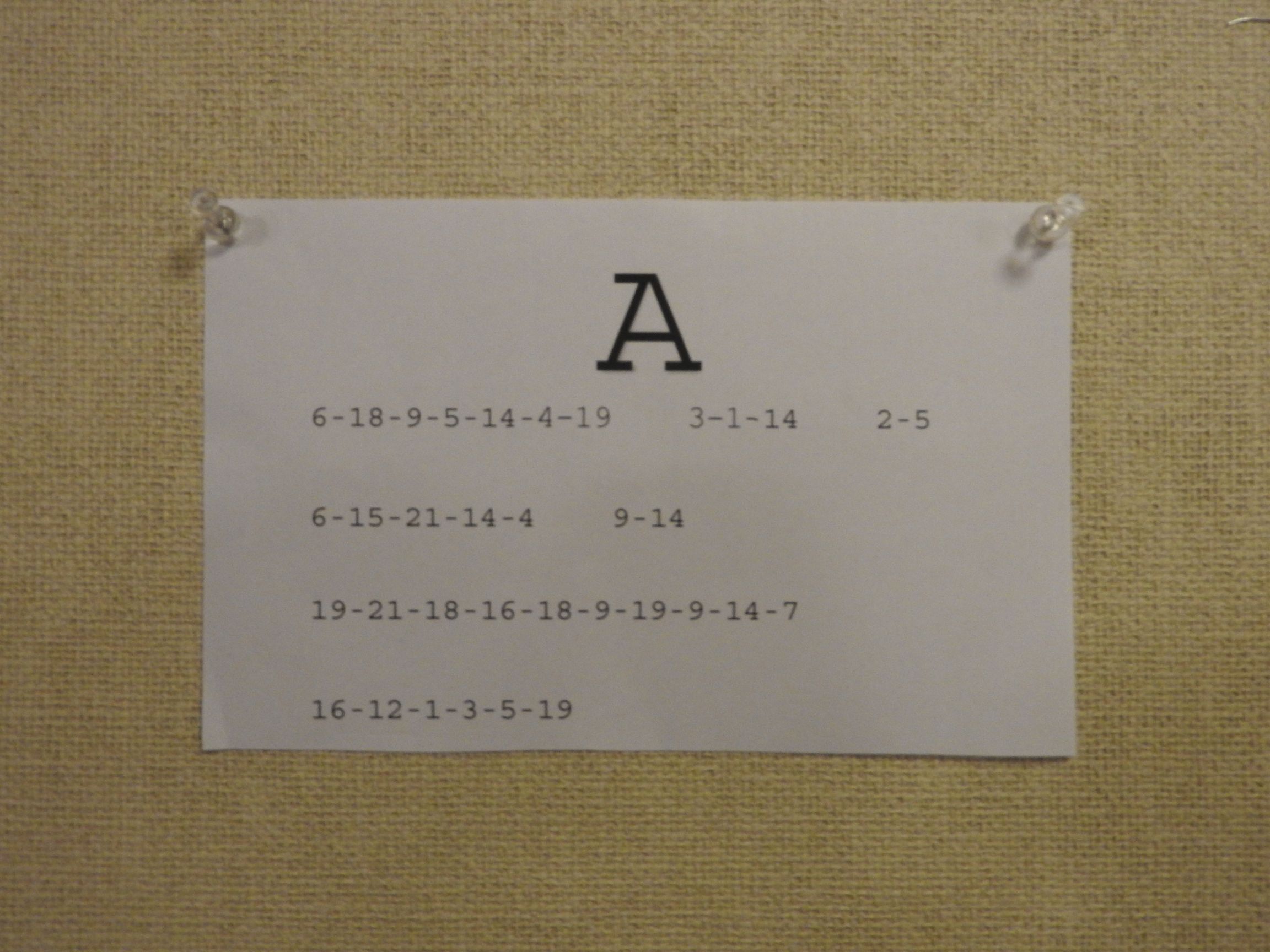 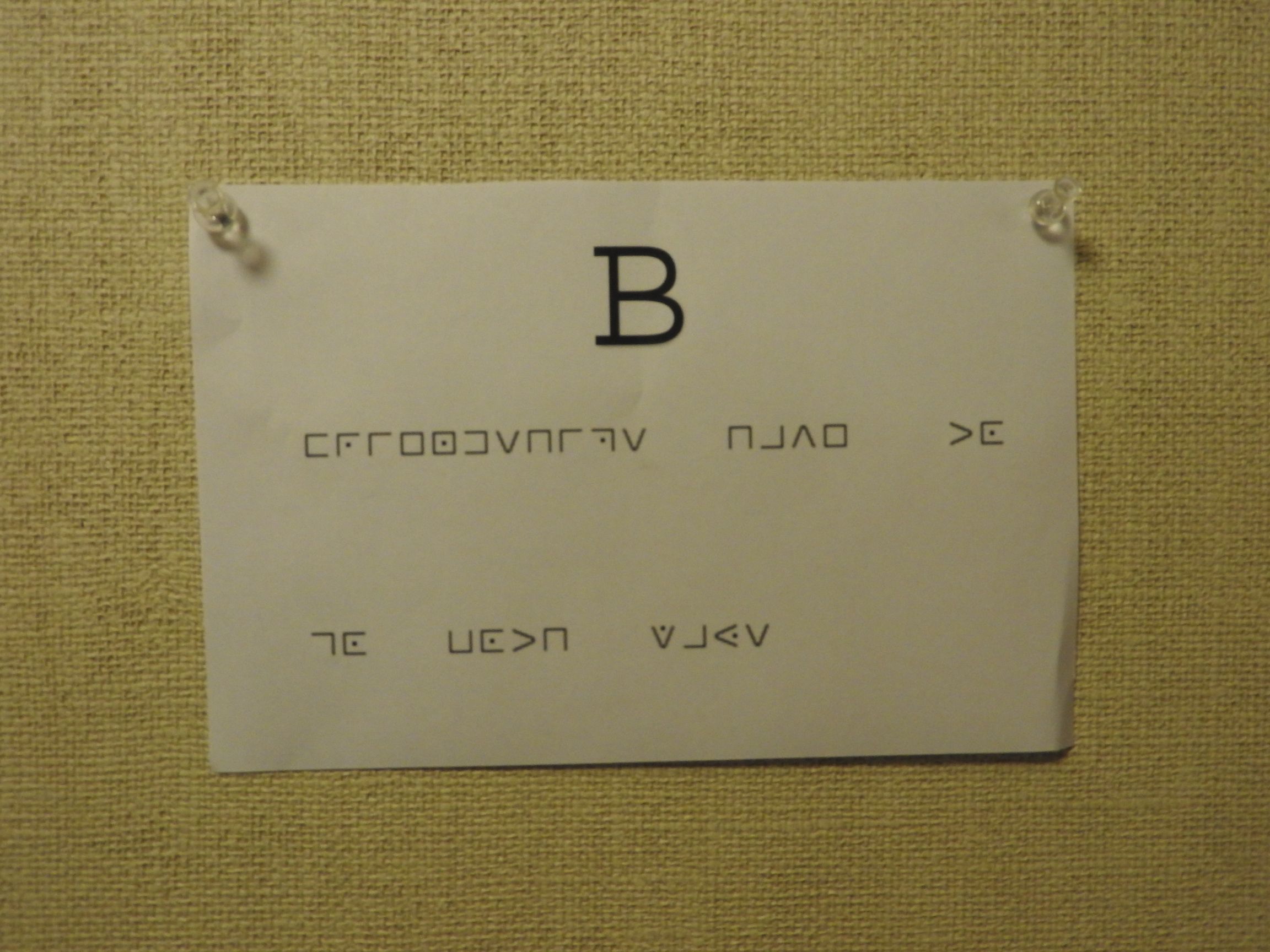 Here was the challenge: the kids had to figure out which of the doors contained the same message that they had found using the book cipher before! They had to recode the message into other codes and see of one of those messages matched one of the doors. 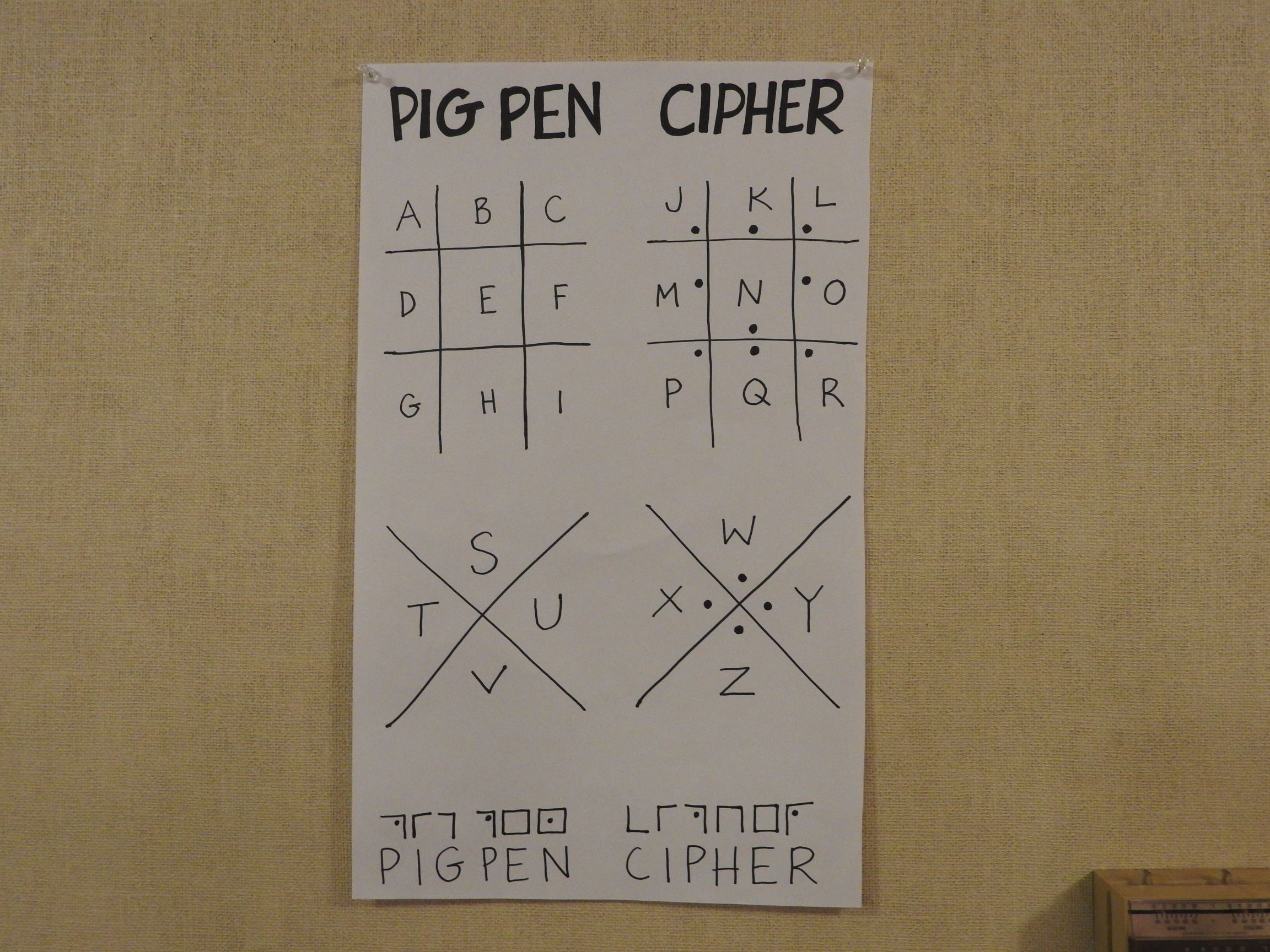 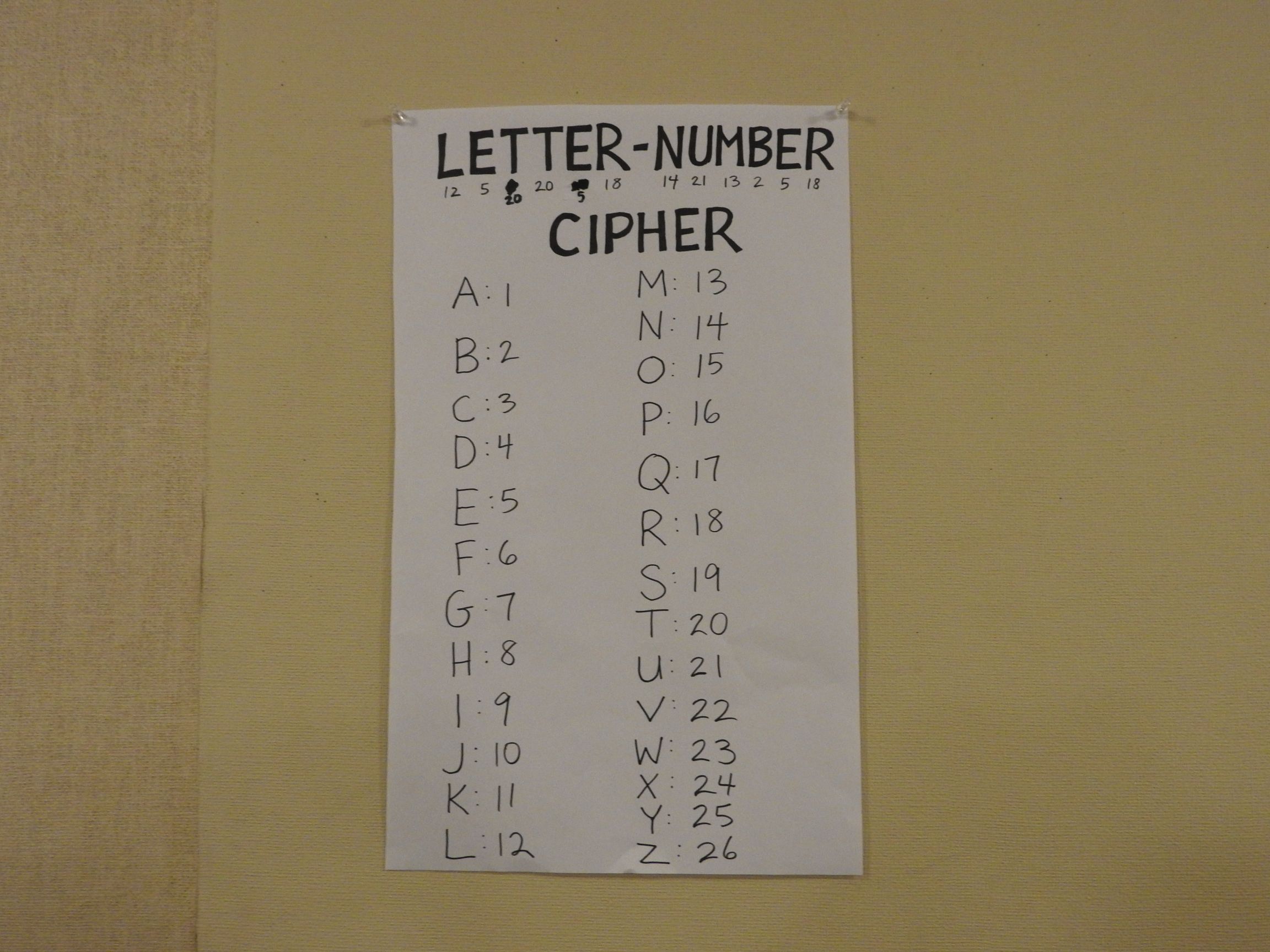 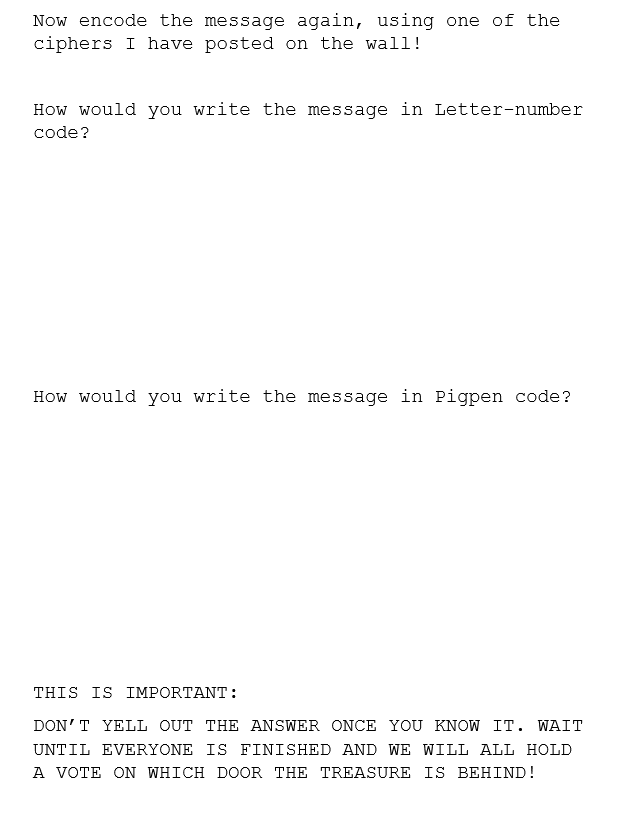 I’m really glad we started out with a challenging puzzle activity. It was hard though, and there were a lot of steps! I was all the prouder of the kids and parents for cracking my devious puzzle! 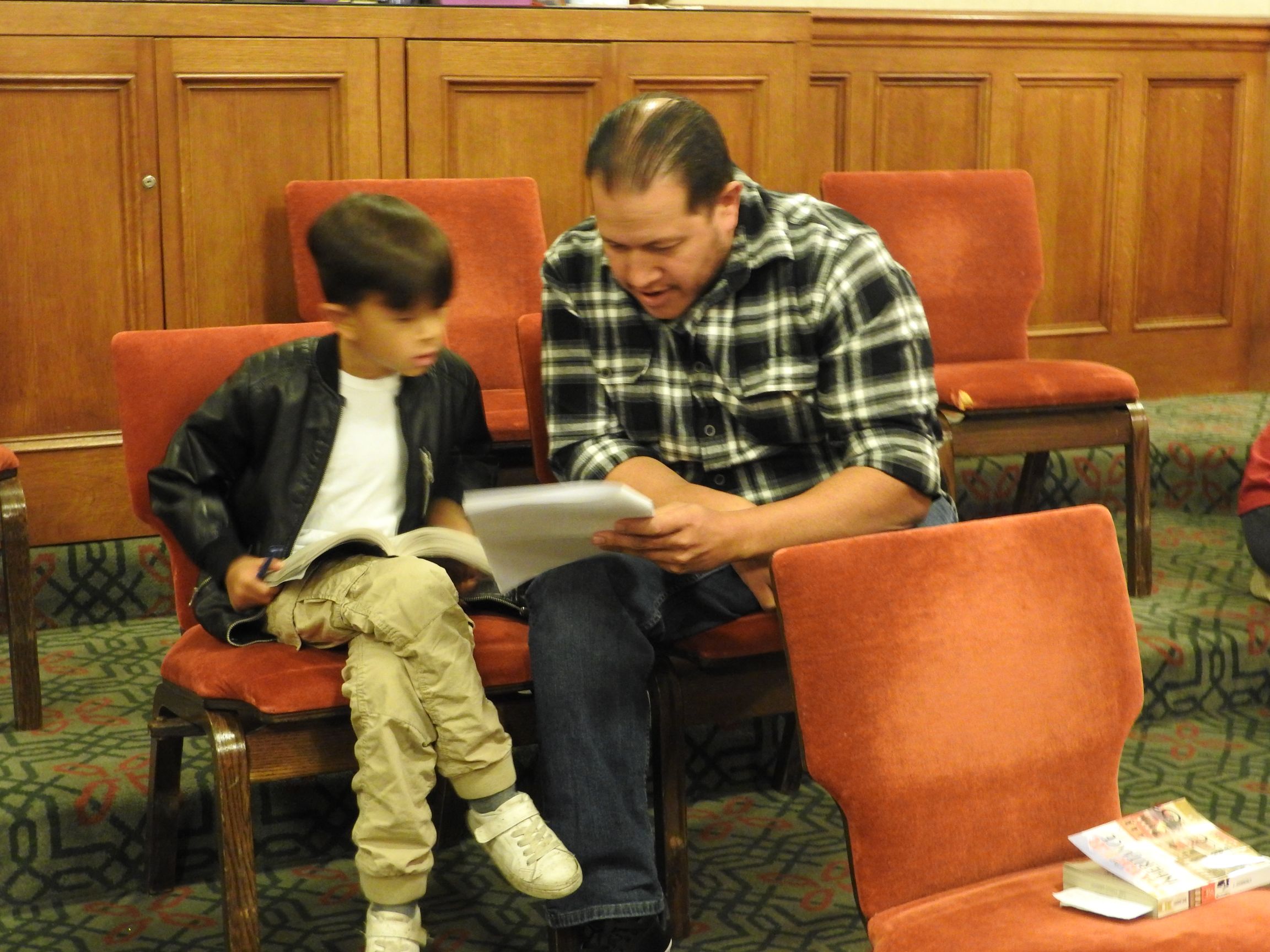 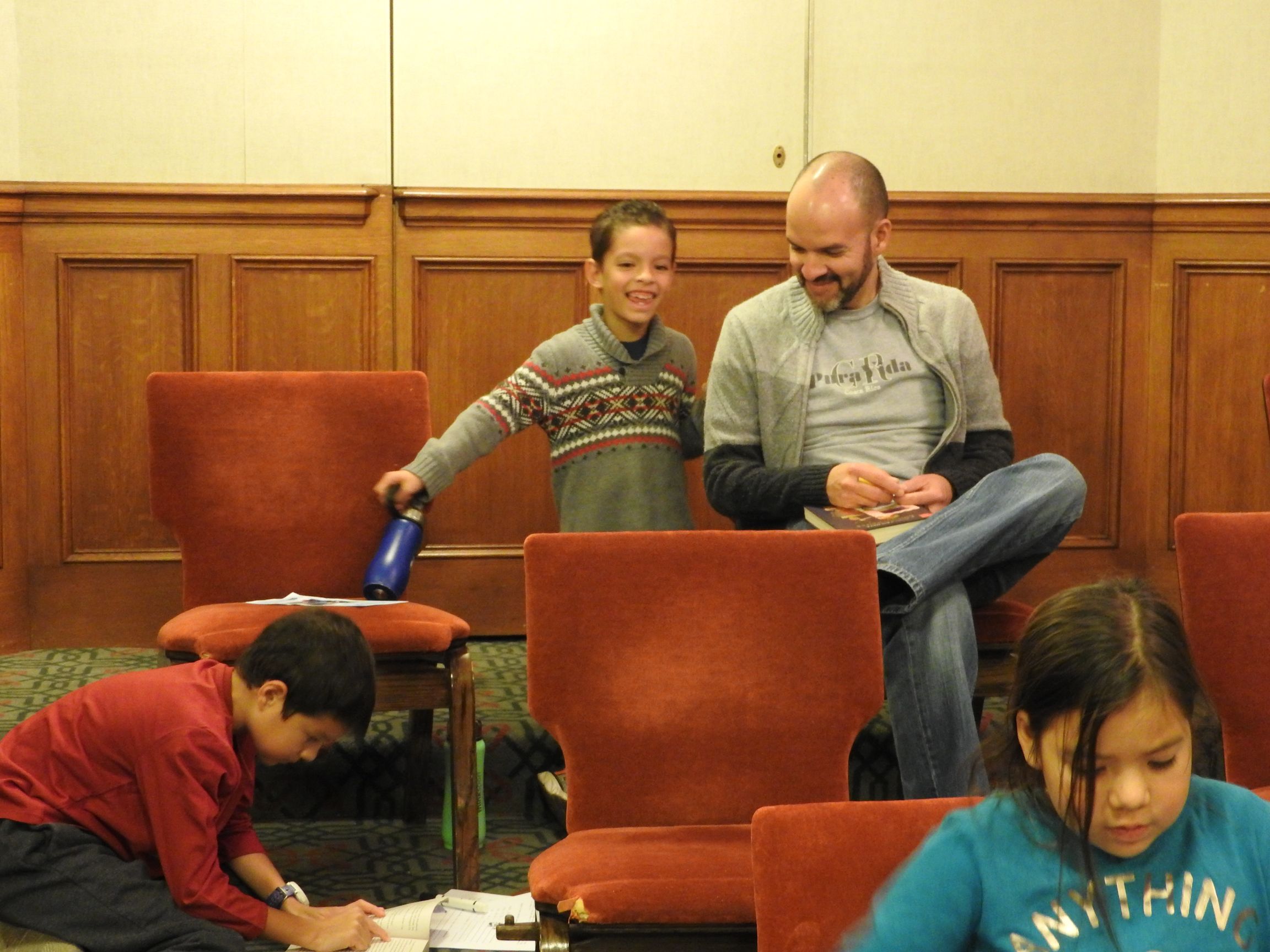 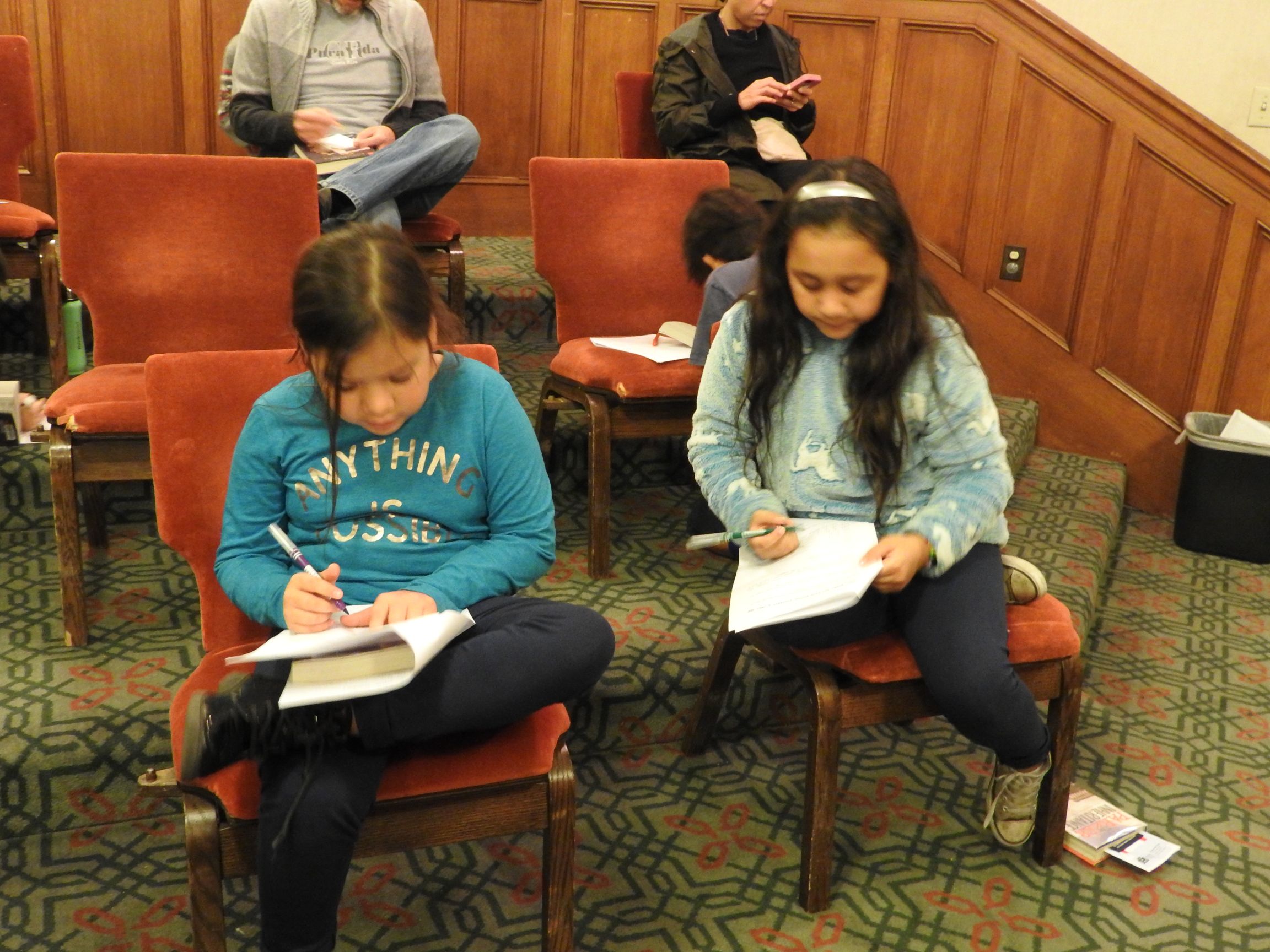 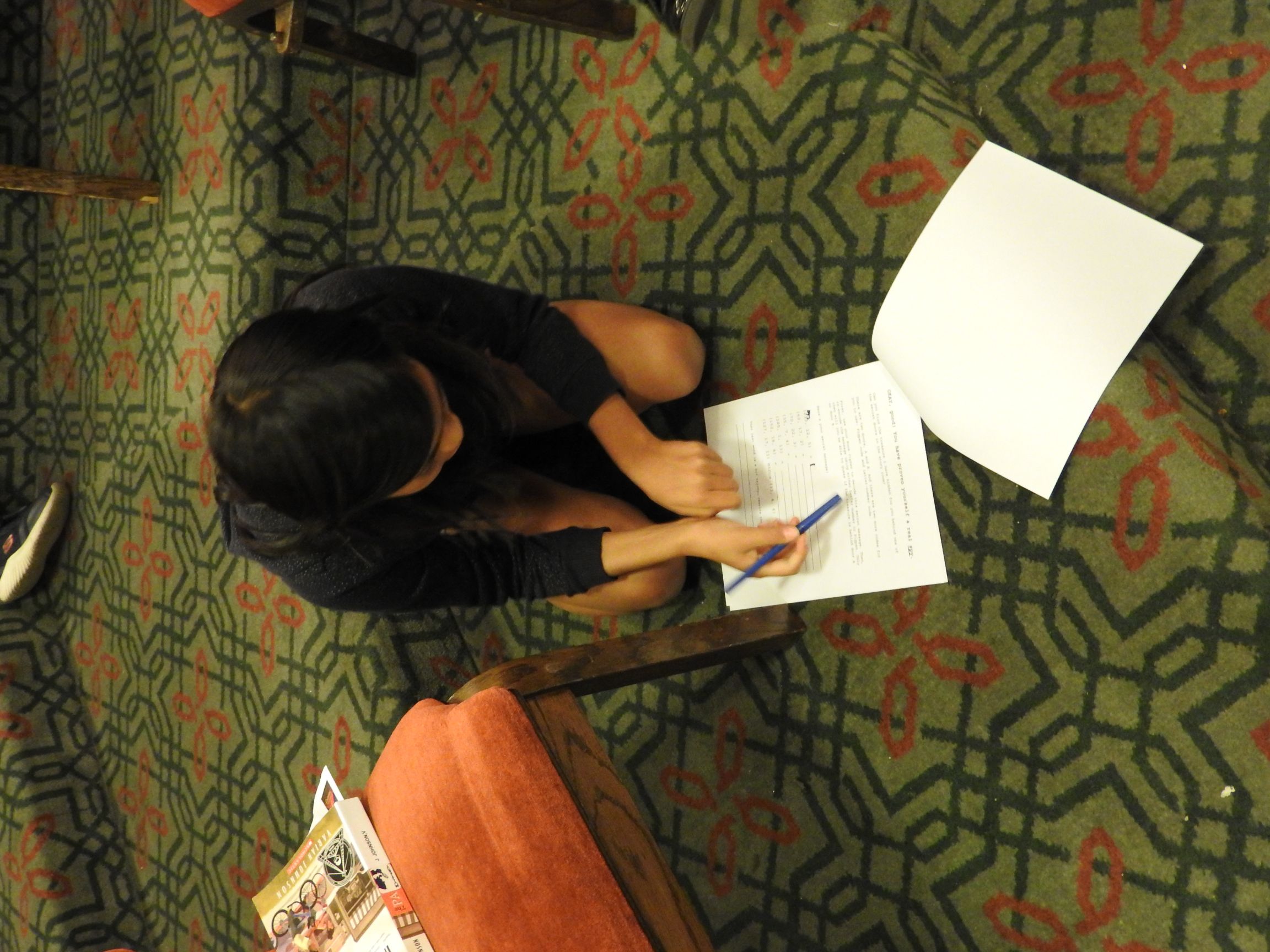 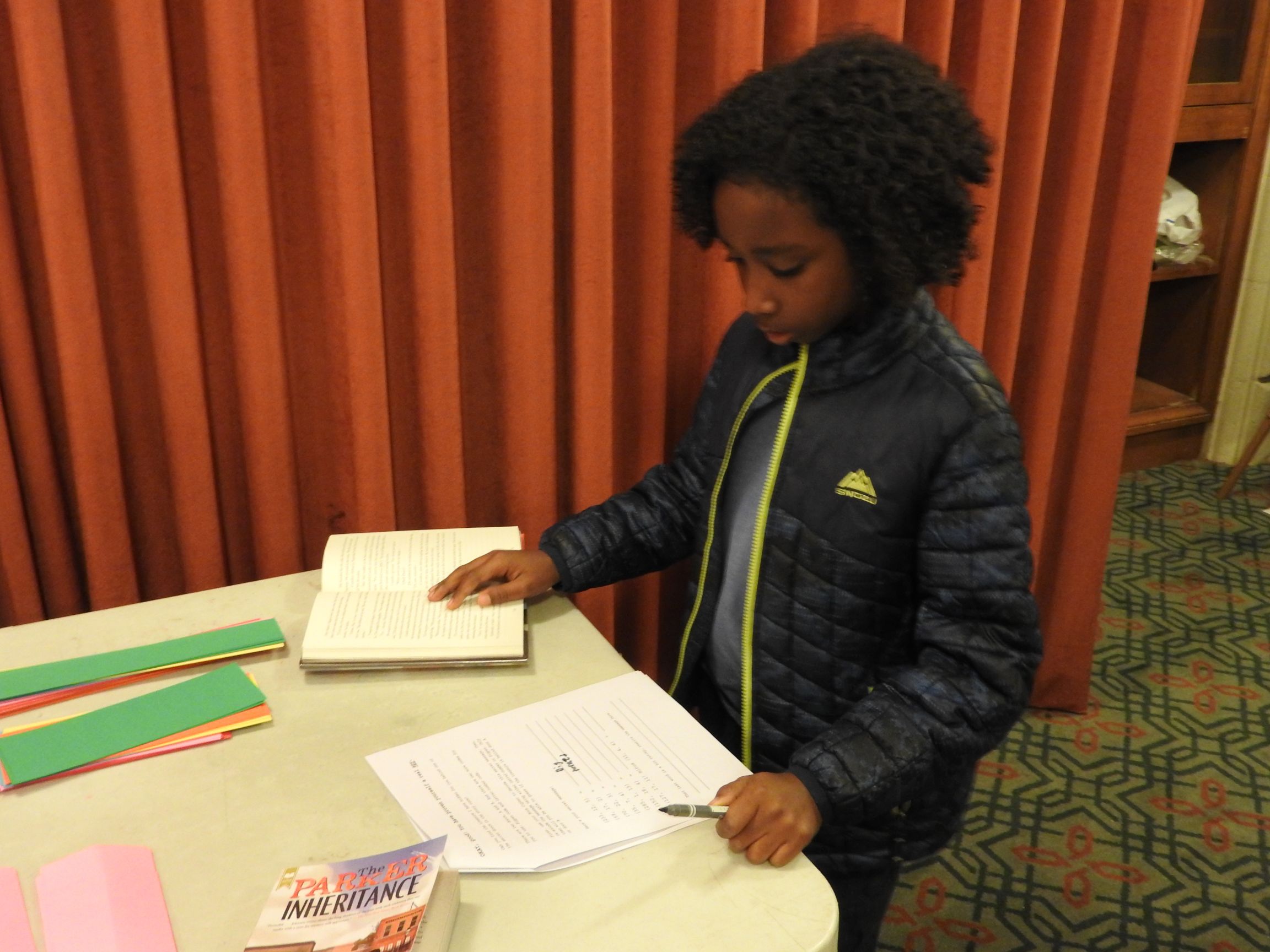 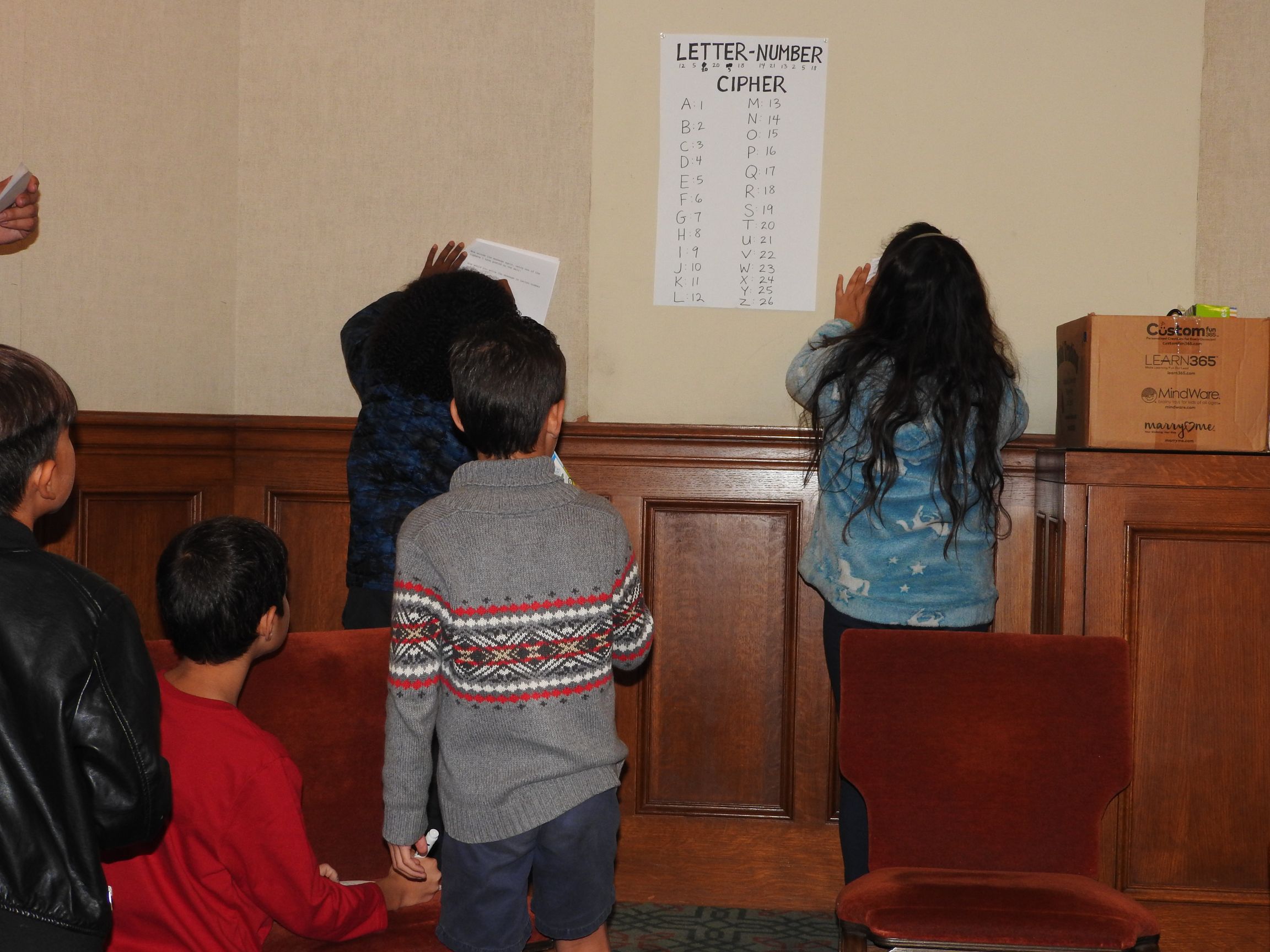 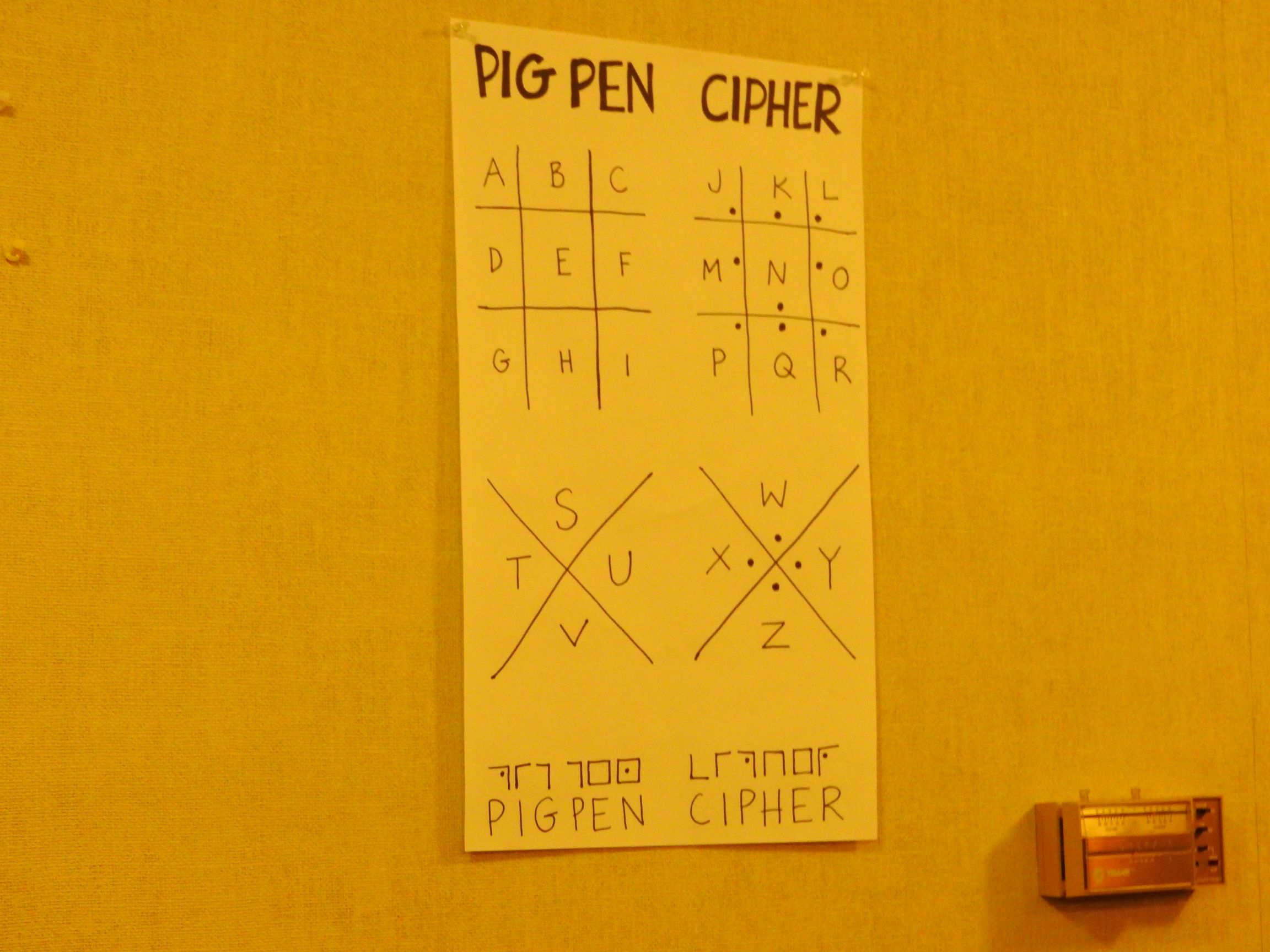 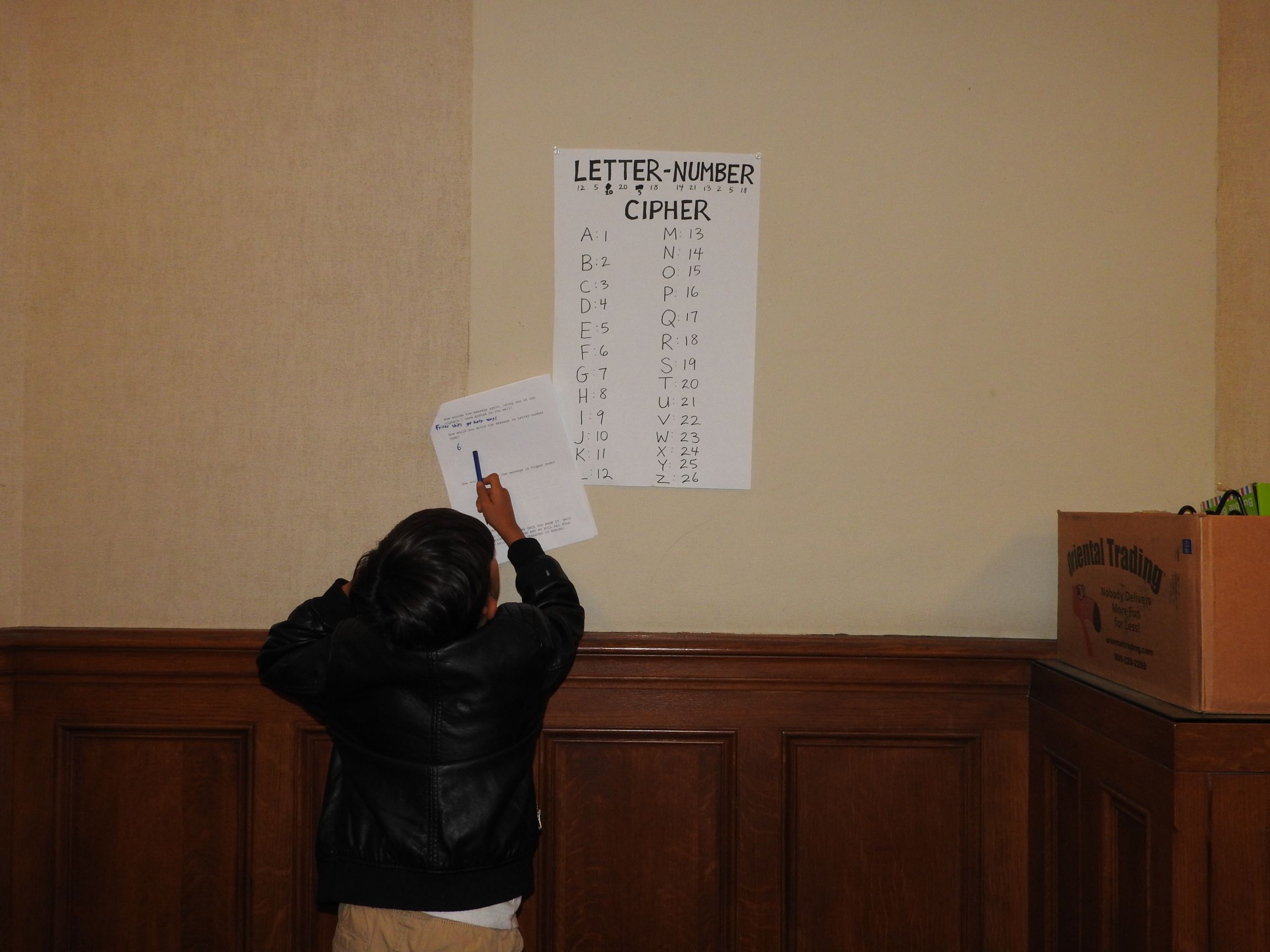 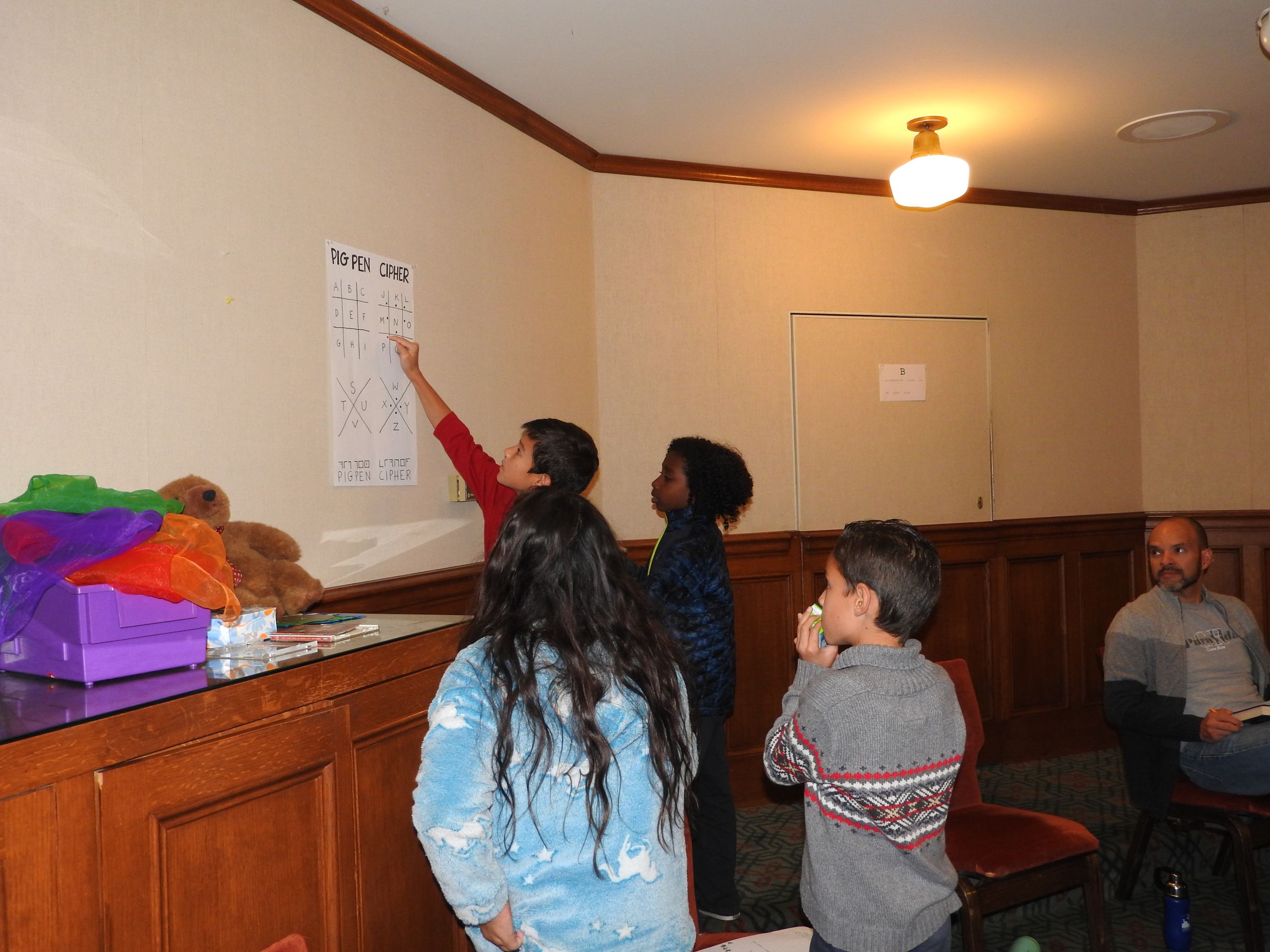 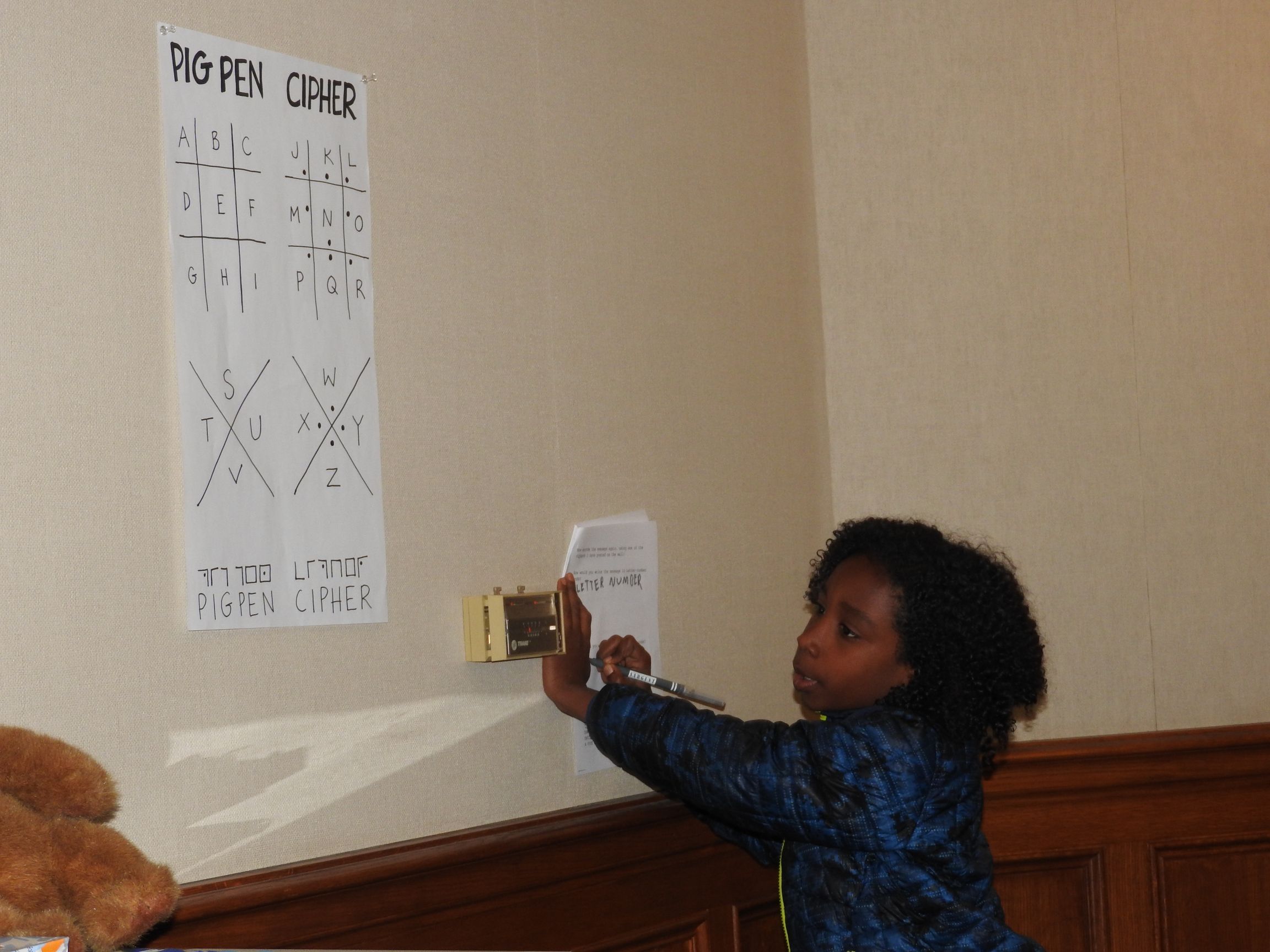 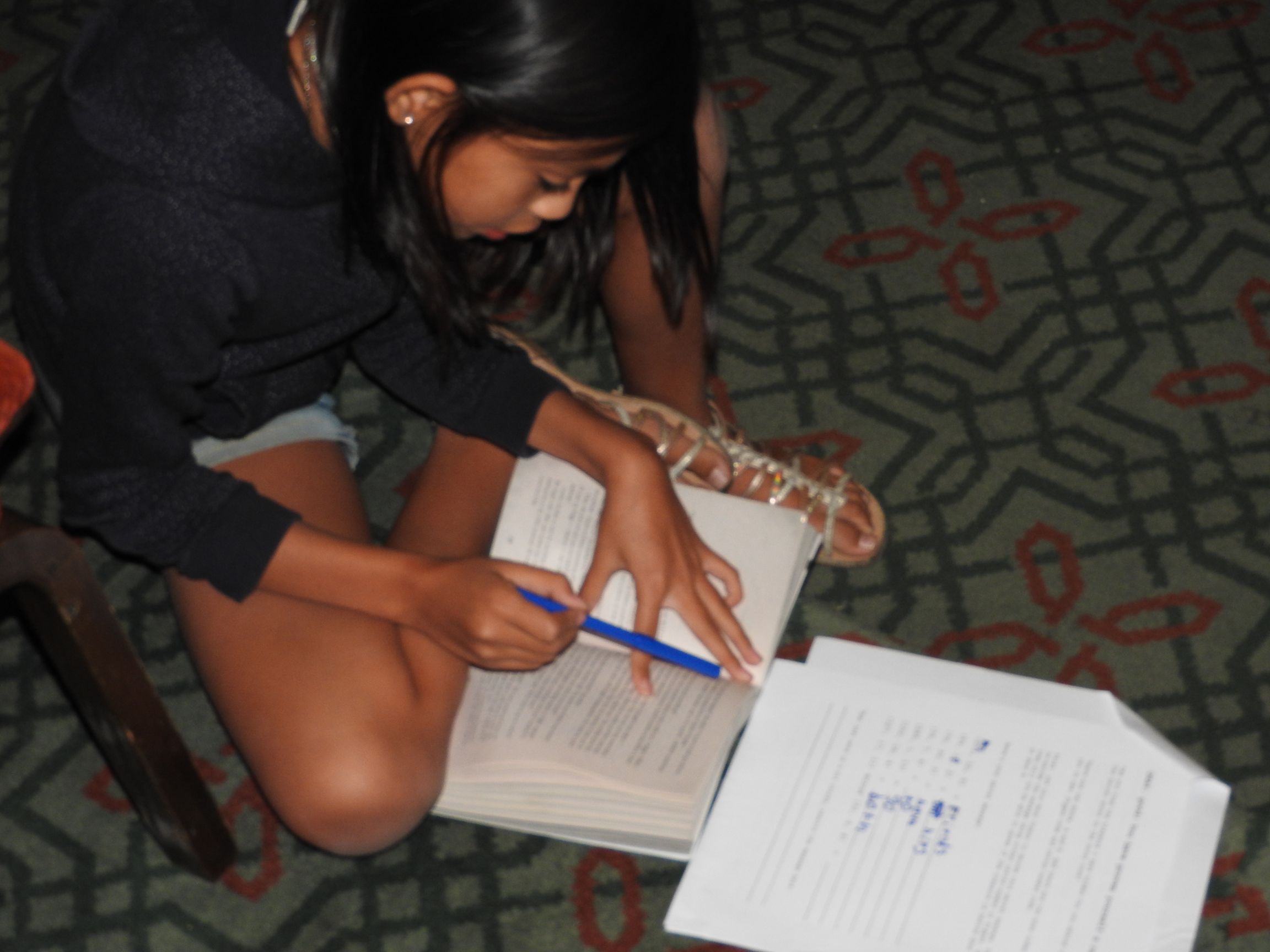 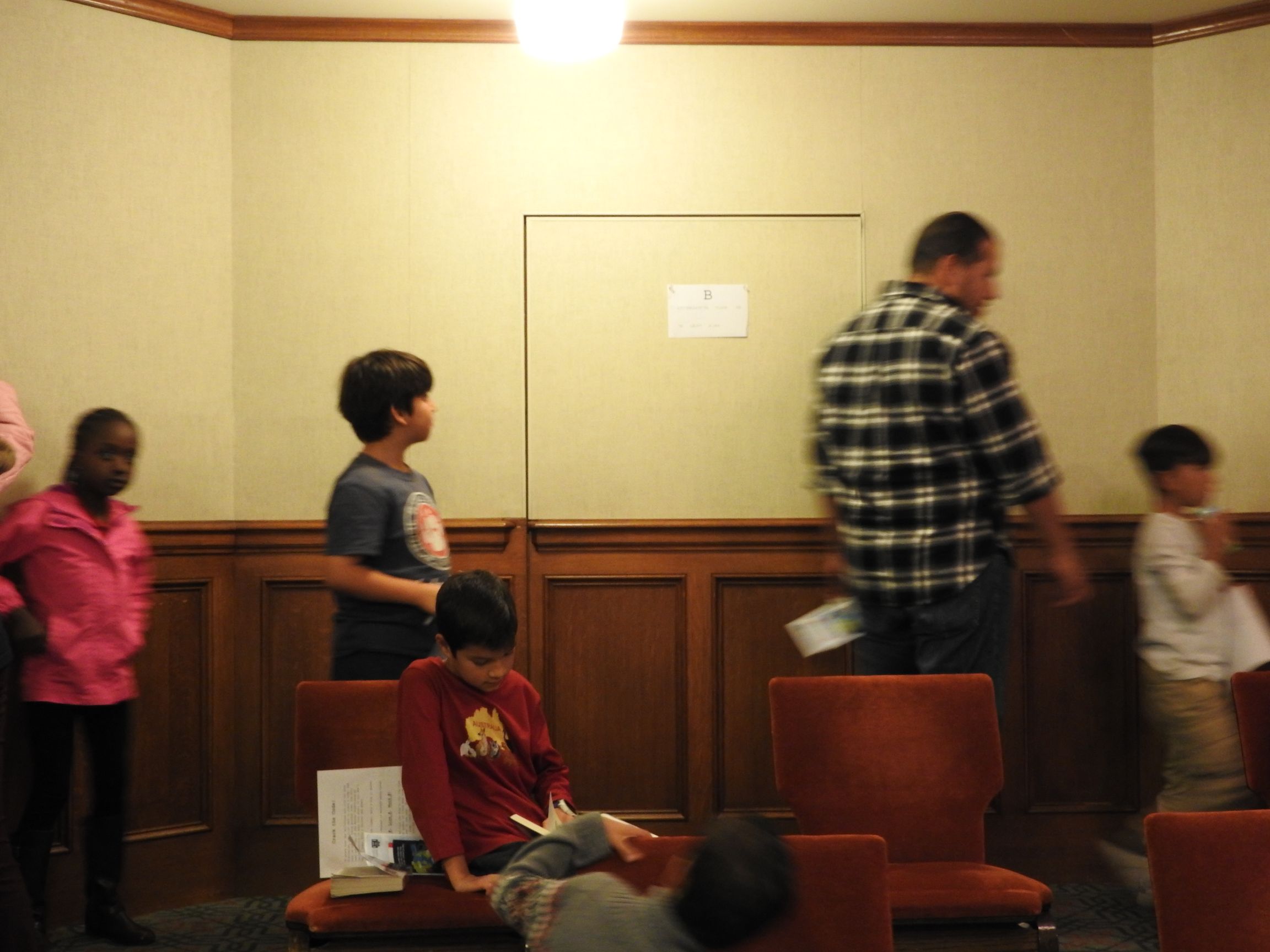 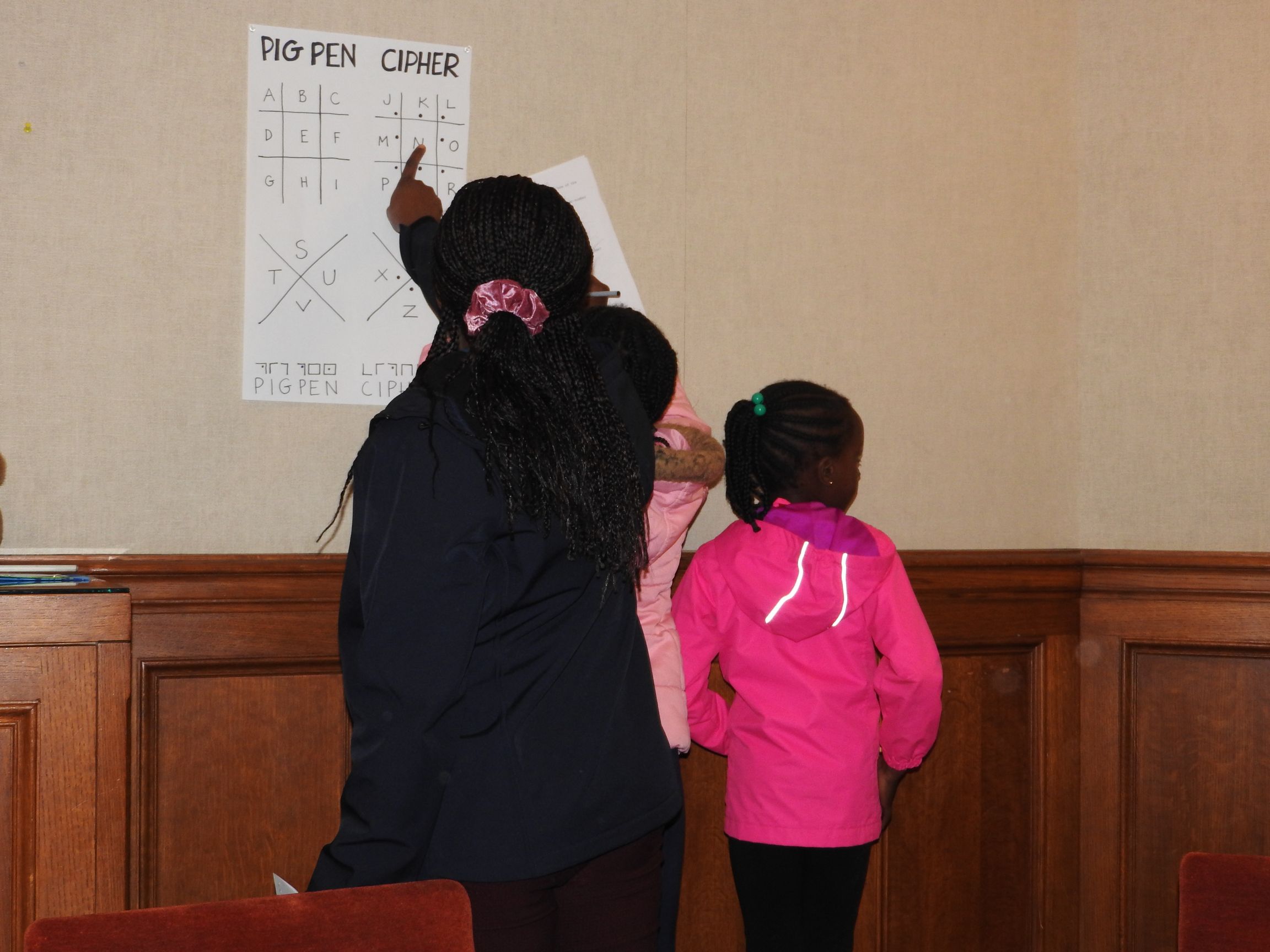 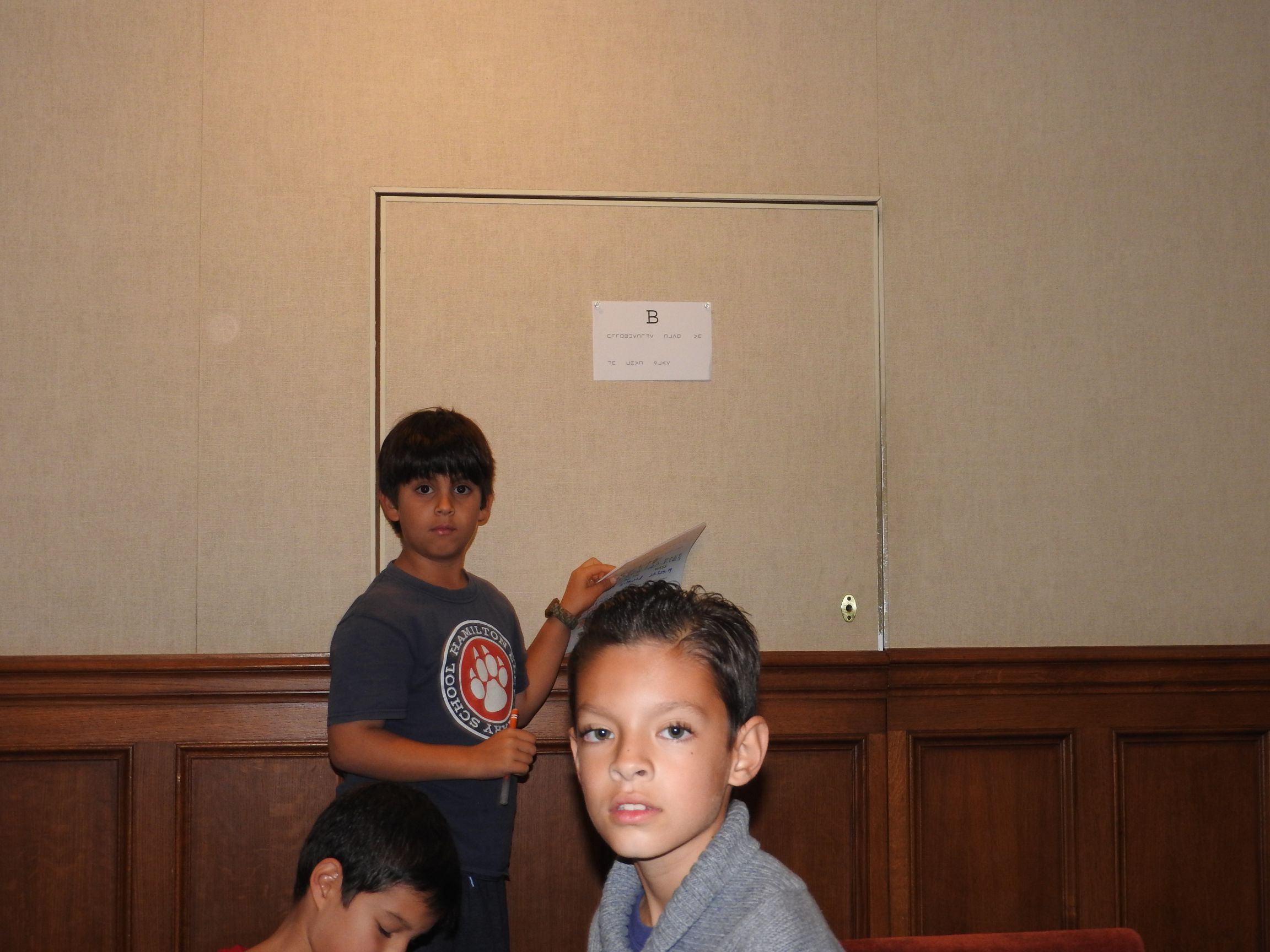 Once most of them figured out which door the treats were behind, and we took a vote, I opened the door and brought out the snacks!

We all sat back down in our comfy chairs and had a lively discussion.

*On page 120, Big Dub asks Adam Douglas, “What, you think we’re gonna lose?” Adam replies: “No. I’m worried we’re gonna win.” Why is he worried about winning? What do you suppose Adam thinks will happen?

After helping the Washingtons and Reggie Bradley to get out of Lambert safely, Chip Douglas seems to drop out of the book, not mentioned again. What do you think became of Chip? What kind of person did he become?

*On page 139, when Candice tells her mom that the assistant principal accused them of trying to break into the school, she asks her mother if it was because they are black, and Johnson writes: “She said it like a question, like she was doubting what she knew was true.” Mr. Rittenhauer said it was all “just a misunderstanding.” Was it? What effect does it have on a person when someone in power, someone with authority, treats someone in an oppressive or prejudiced way and then refuses to admit it? Does it make the person being oppressed doubt themselves and their perceptions of reality? Does Mr. R. have to come out and admit it for us to know that he is racist?

*On page 244, when Brandon finally erupts at Milo and insults him, Candice sees him as “someone too cruel and cold to be her friend.” And when Milo throws a punch, Brandon punches back. Candice says “No!” What would she have him do? Not defend himself? Was there anything wrong with him punching back? Was it wrong for Reggie Bradley to poke Marion Allen in the eye?

*On page 275, Siobhan asks Parker: “What do you want me to do, Reggie? Pretend I’m someone else?” She shows him her dark brown arm, and he replies “There are creams you can take. Medicine—“ How does the suggestion that she should change her appearance make Siobhan feel? How would it make you feel if someone suggested that your life would be better if you changed the way you look, or changed your name, or changed your religion?

*Parker is afraid his board and his customers won’t like him dating a black woman. Candice’s dad is afraid his coworkers and employees won’t respond well to him dating a man. And Candice knows that, because “She had been at her father’s office enough to hear some of the crude jokes. How did it feel to listen to things like that every day, knowing the people you worked with thought horrible things about who you really were?” (p. 309) When we hear mean jokes like that, even if it’s not about us, what can we do to help someone who might secretly be hurting when they hear those things? How can we make a better society for everyone, including the people who might be afraid to speak up about their feelings?

Which storyline did you enjoy most: the 1950s storyline, or the present day storyline?

What would YOU do if you found the Parker Inheritance?

After discussing the book for a while, we changed gears and worked on a craft project.

Craft: How to Make a Secret Code That Only Your Friend Will Know

First, you need to prepare cardstock in two different shapes. I used a paper cutter to cut some of my cardstock into five or so long (lengthwise) thin strips. And on other sheets I cut them (widthwise) into roughly 3 thicker strips per sheet (with some cardstock left over and discarded).

I then folded those thicker strips and using handheld scissors, cut two slits a few inches from the edges. Make sure not to cut the cardstock all the way through! These are just slits to weave the thin sheet into.

On the thicker cardstock slip with the slits, use your ruler to put 13 dots on either side, each 1 cm apart. Write letters A-M on one side and N-Z on the other.

Then on the long, thin slip of cardstock, make dots with the same 1 cm spacing, but make at least 16 dots per side. Leave some space at the top of the thin slip though. Write the letters of the alphabet randomly next to the dots, starting in the middle rows and leaving a few rows of dots at the bottom empty – you will fill the bottom rows in later!

In the sheets below, the letters “W, Y, O, Q, and K, I” have to get repeated in rows at both the top and the bottom of the thin sheet.

Now you can start to see the many different code possibilities in your code maker! But you’ll have to tell your partner which letters to align. So you’re going to draw lines that will serve as guides. Use different colors. Make a line across the top of the thin slip to show where it should connect with the top edge of the thick slip.

Make multiple lines in different colors! In my sample, I have one line in blue, one in purple and one in black.

In order for this to work, your friend has to have a code breaker that is identical to your own. So write the letters of the Code Breaker on another thin strip, in the same exact order. Don’t put the guide lines yet though—your new Code Breaker and Code Maker might have a slightly different alignment. You want to make the guide lines to fit the new ones.

And that’s it! You’ll be able to send each other coded messages, and use different codes for different occasions.

Always instruct your friend which line to use on a separate piece of paper from your message. That way, even if someone does get ahold of your Code Breaker, they won’t necessarily know which set of letters to use because they won’t have the instructions about using the purple line vs. using the blue line! 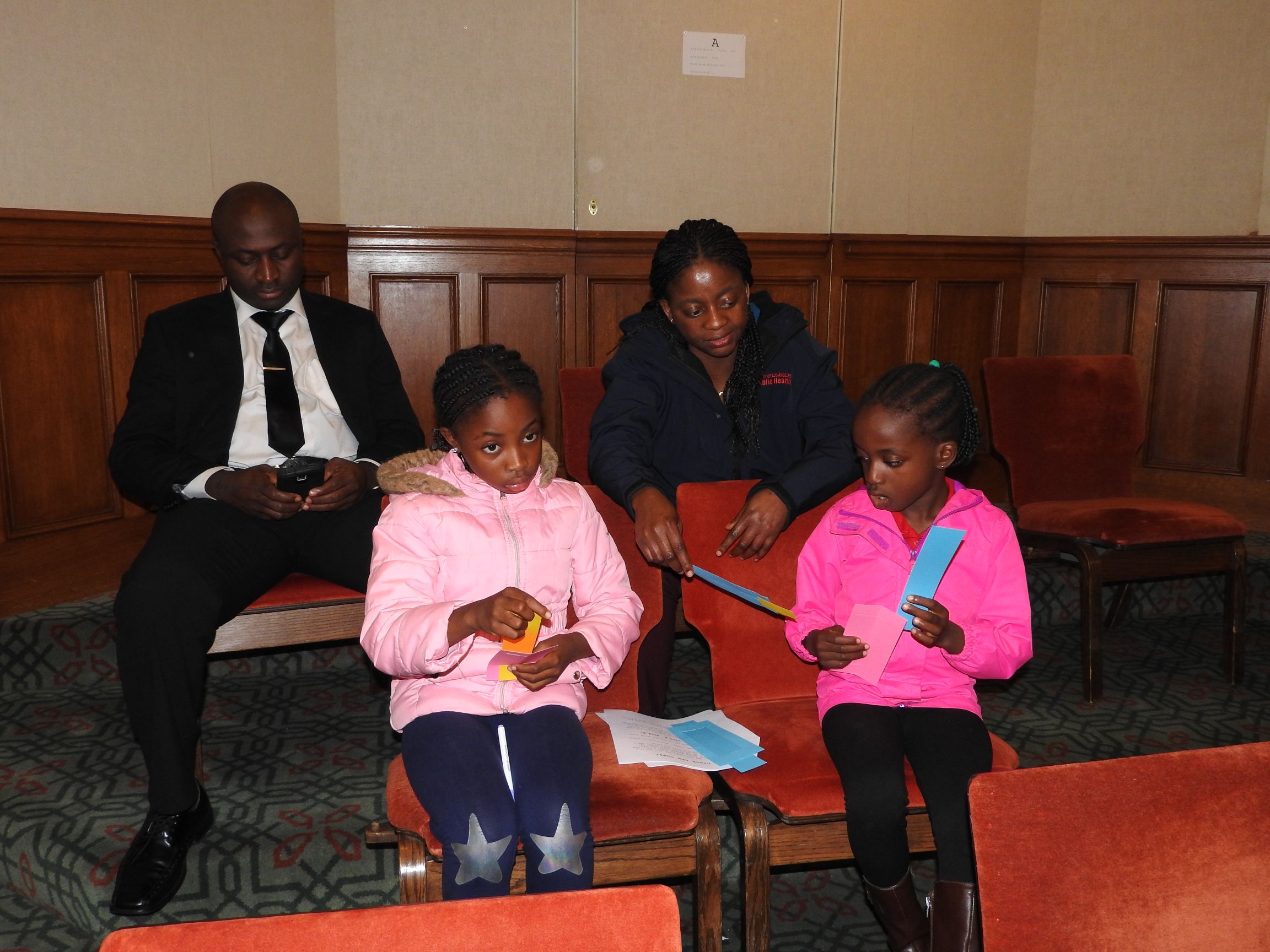 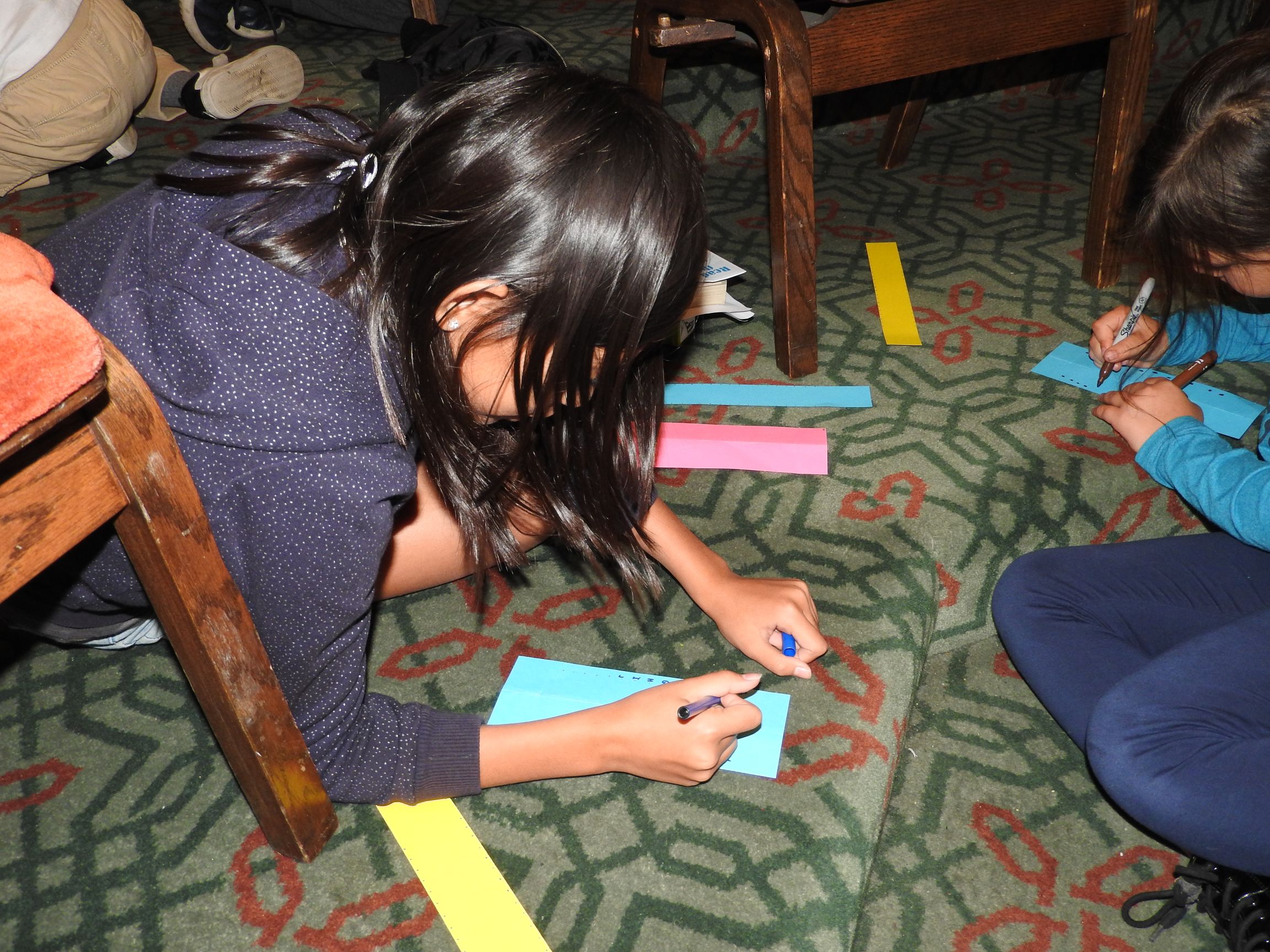 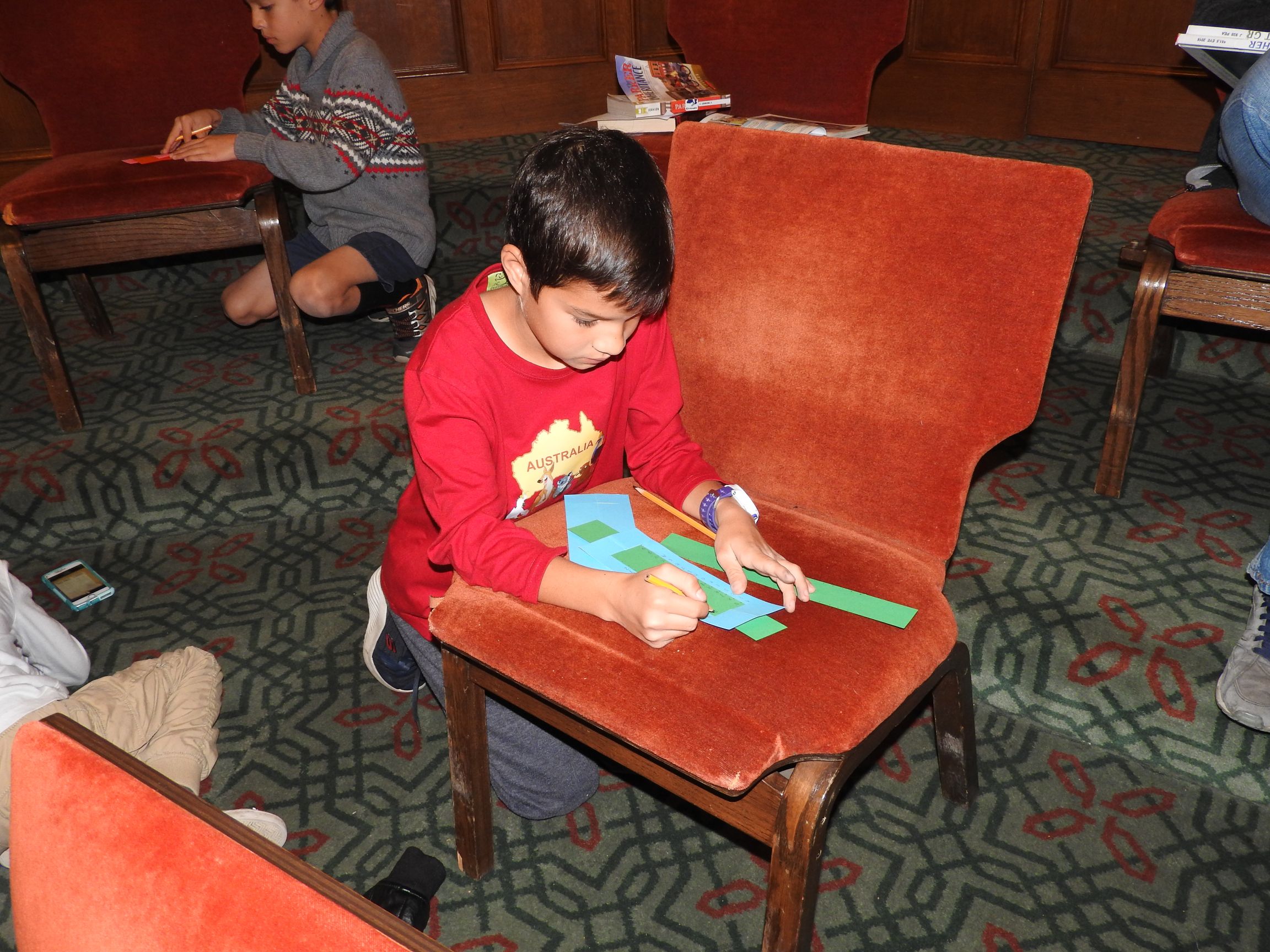 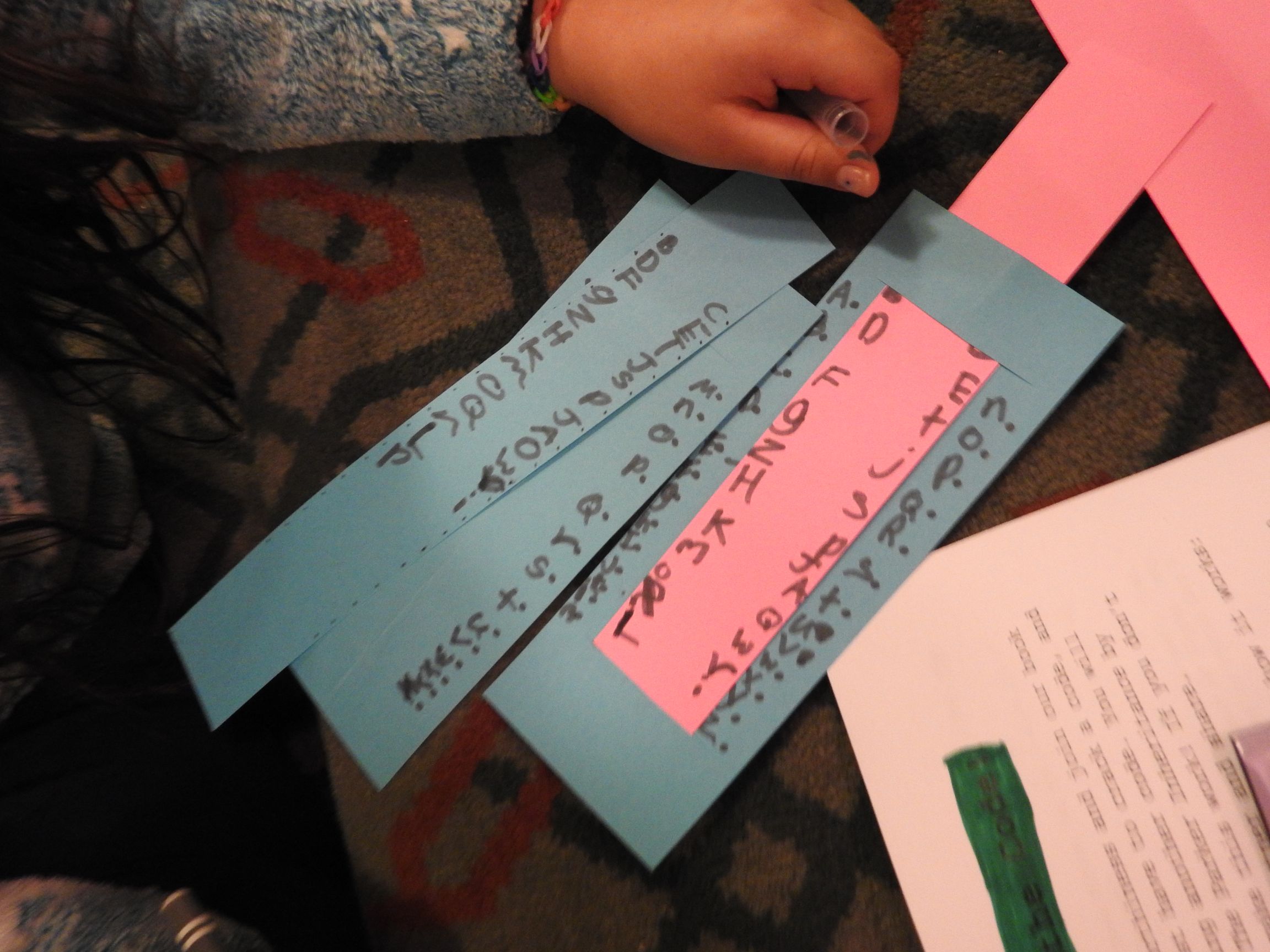 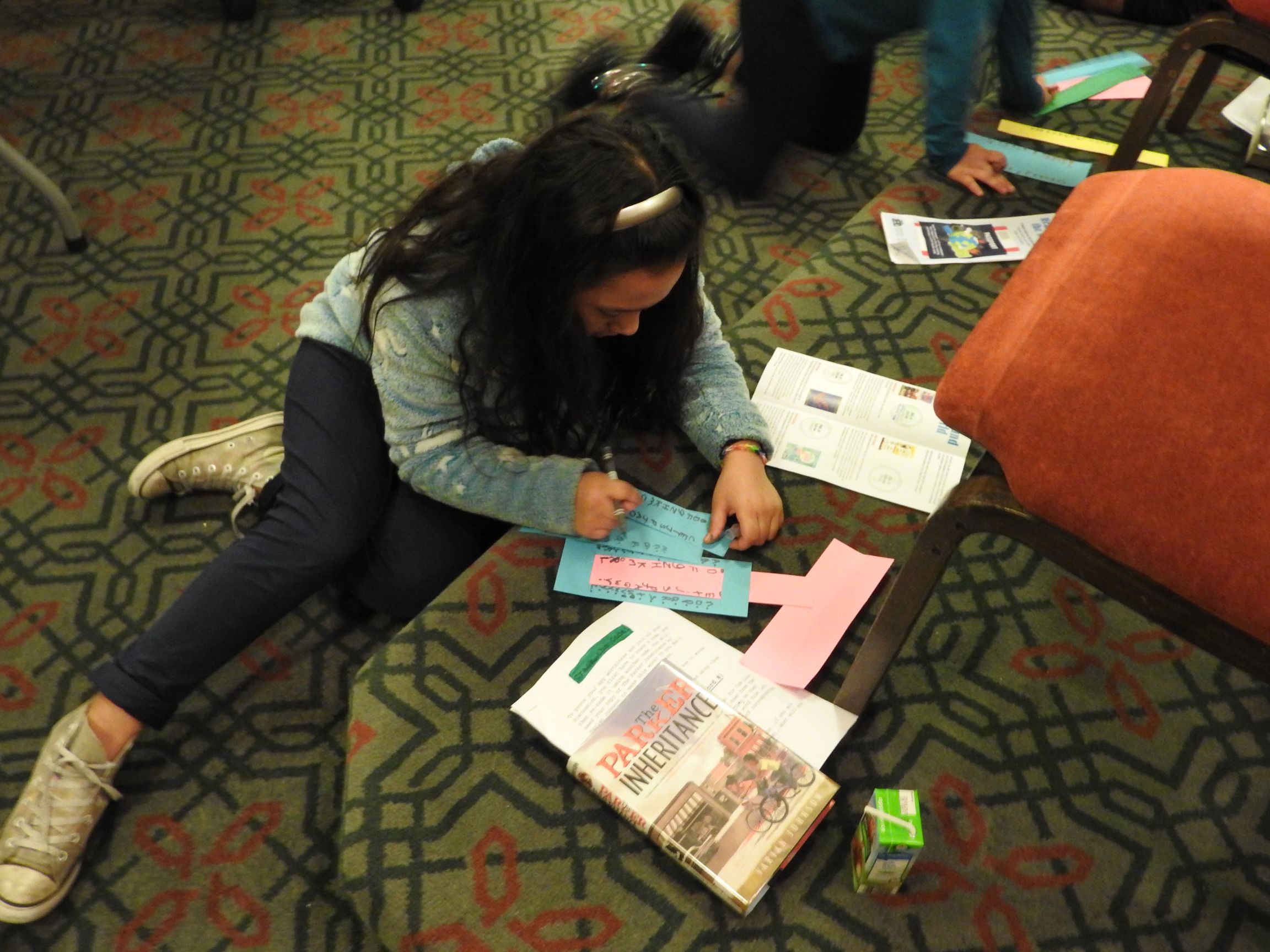 It was an extremely successful first meeting for this book club! I was pleased by how many of the kids had thoughtful things to say about the book’s themes of recognizing racism, countering bullying, being yourself, and being kind to others. I can’t wait to meet with all of you again to discuss Where the Mountain Meets the Moon by Grace Lin on January 16th! Copies are available at the Central Service Desk, so come by and check it out if you haven’t yet! 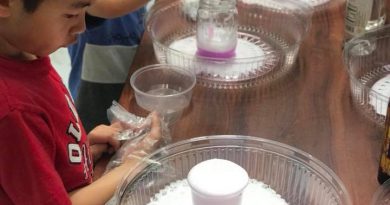 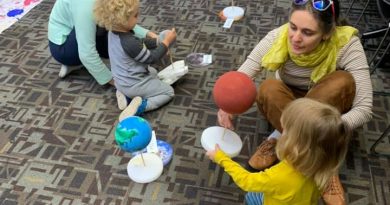 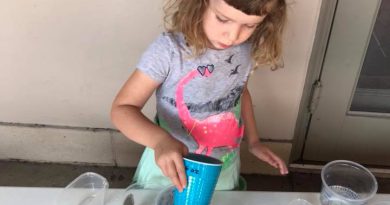