One City, One Story 2015 “Tell Your Story” Contest

“ Miki! Your English teacher’s here!” I sighed and put down the book I was reading. Ever since I was five years old, I had been taking English lessons. For some reason, the language I speak is different from my parent’s. My mom wanted me to learn English so I won’t feel lonely at school.

My teacher’s name is Hana, and she speaks the same language I speak. Hana is very nice and kind. She always brings a yummy snack for me. Maybe learning English won’t be so hard with Hana to help me, I thought as I went to the front door to meet her.

After English class when Dad came home, at dinner I asked him and Mom, “I remember a place where there were lots of little children. Then you and Mom came in the room and took me here. Where was that?” Dad stopped mid-chew. Then he looked at Mom and said, “Carla, do you think we should tell her?” Mom thought for a second.  “No, Robert. I don’t think we should—” began Mom, but Dad interrupted her. “But she wants to know!”  “ Robert! We’ll discuss this later.” Then Dad went back to eating like nothing had happened, but Mom glared at him, then dumped her plate into the sink and stormed upstairs.

At night, I couldn’t sleep. I turned my pillow over a million times, kicked off my blankets and turned on my fan, but I was still hot and couldn’t sleep. I decided to sleep in my parent’s room. So I tiptoed to my door and opened it a little bit. Mom was in the hallway and she was carrying a large photo album. She walked toward the attic stairs, and as Mom stepped onto the first step, a piece of paper fell out of the photo album. When the coast was clear, I opened the door of my room and picked up the piece of paper. It was a photo. I held it up to the moonlight that shone through the open window in the hallway. The photo showed a man and woman hugging a baby. The man and woman wore clothes that looked like fancy bathrobes. On the back of the picture there was writing. It said:

Hiro and Keiko with Miki

The writing had my name on it!  I dashed to my parent’s room. “Miki, what—” began Dad. “Mom! Dad! Listen!” I said. Then I explained that I had seen Mom put the photo album in the attic, and that I saw the photo fall out. “Look!”  I said, and then practically shoved the photo under Mom’s nose. “Are these people my mom and dad?” I asked. Mom just stared at the photo. Dad said, “ Yes. They were our best friends in Japan. Hiro and Keiko died in an earthquake. Hiro said that if anything happened to them, then we should take care of you.” “Oh. So you adopted me from Japan, and brought me here. Right?” “Correct.” Mom said. Then I asked the question I have been pondering for a long time. “ Am I Japanese or American?” Mom said, “Both.” Dad said “ You’re Japanese-American.”

I have been thinking about that question for a long time, and now that I have an answer, I’m very happy. I asked Dad, “Can we go to Japan next year?” “Sure!” said Dad. “You know what? We could go next week. If you pack everything you need.” “Yay!” I am very happy that I know I’m Japanese and American. Finally I know where I belong.

To view a list of all the winners, see:  http://pasadena-library.net/kids/2015/ocos-contest/ 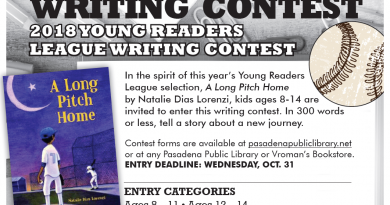 “The Mattesons” by Maya Bailey

Learning the Art of Writing Plots, with Author Kristen Kittscher