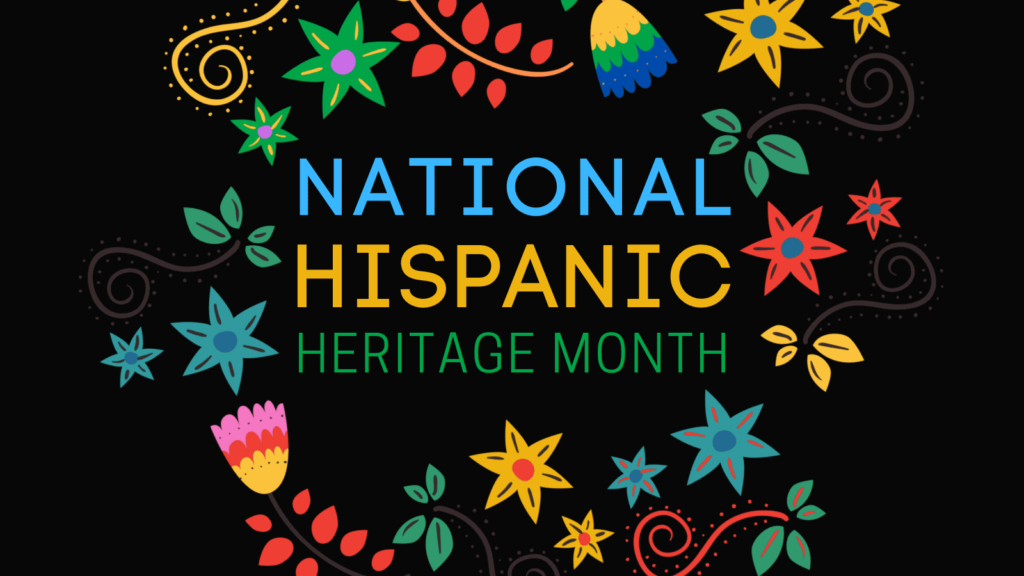 From September 15 to October 15 we observe National Hispanic Heritage Month, which celebrates the histories and cultures of Americans whose ancestry can be traced back to Spain, Mexico, Central and South America, and the Caribbean.

What started out as a week-long event in 1968 under Lyndon B. Johnson became a month-long celebration in 1988 during Ronald Reagan’s presidency. September 15 was chosen for its significance to the Latin American countries that include Costa Rica, El Salvador, Guatemala, Honduras, and Nicaragua, all of which gained their independence on that date. But it was also chosen for its symbolic aspect it has for other nations such as Mexico and Chile, which celebrate their independence on the 16 and the 18, respectively.

This is a book I’ve been wanting to read simply for the title alone. With “gothic” in the title, one can’t expect anything less than a story that has elements of the supernatural and the mysterious—a fantastical story that heightens one’s sense of curiosity and dread.

Noemi Taboada is an unlikely heroine. She’s a glamorous debutante more accustomed to life in the city than in the Mexican countryside. And yet that is where she finds herself. She goes to her cousin Catalina’s home in the mountains of El Triunfo at her behest because she thinks her husband intends to kill her. Catalina’s husband, the very English Virgil Doyle, is as menacing as he is alluring, and Noemi soon finds that his side of the family harbors some dark secrets. There is an unwelcoming atmosphere in the grand home that once saw better days. There is something unsettling about it and its inhabitants. Noemi wants to help her cousin, but she feels somewhat powerless in a strange place and among “family” that sees her as an intrusive stranger. The only person who wants to help her is the family’s youngest son Francis, who knows the dark secrets of the Doyle family. What Noemi soon learns is a twisted history of violence, incest, and madness.

Steeped in Mexican mythology and having all the trappings of a classic gothic tale, Mexican Gothic is a fantastical story full of thrills and chills. It melds the old world with the new, reality with fantasy, and the natural world with the supernatural; it crosses cultures and social classes and is a mesmerizing read that redefines the Western idea of the gothic novel.

Once I Was You: A Memoir of Love and Hate in a Torn America by Maria Hinojosa

I met Maria Hinojosa when I was at ALA 2022 this summer in Washington, D.C. She was promoting her memoir Once I was You, which she was freely handing out and signing! I sort of regret not knowing who she was at the time, but then again I’m quite oblivious when it comes to meeting celebrities or famous people. Hinojosa is an award-winning journalist who’s reported on stories about people and communities that often get ignored by mainstream media. As a Mexican American, she’s written much about the Hispanic community and immigration issues.

In her memoir, Hinojosa shares intimate details about her life growing up on the South Side of Chicago, where her family settled after leaving Mexico. Their relocation was the result of her father, a doctor, getting a job as a member of the surgical faculty at the University of Chicago. Her immigrant story is not necessarily one of hardships, yet the focus of her personal narrative are the stories of people who cross the U.S. southern border and are exploited and neglected. As a woman of color who has witnessed how immigrants are treated, she writes about the plight of immigrants in the United States and the broken immigration policy that does very little to help them. Her memoir in many ways is an indictment of politicians and lawmakers who are responsible for creating discriminating policies that greatly contribute to the human rights issues inherent in America’s immigration crisis.

Hinojosa writes with compassion and with humanity on the immigration subject. Once I was You gives voice to those whose voice matters most. It’s not only a memoir about her life but the lives of others whose stories will open your eyes to the immigration crises.

This Thing Between Us by Gus Moreno

The horror genre is full of rehashed, recycled, and reimagined scary stories. There’s really nothing wrong with that because most horror aficionados really don’t care as long as the story gives them a good spook. One of the most common tropes in the genre is an object being the cause of a haunting, be it a doll, television, or in Gus Moreno’s book a smart speaker.

Vera and Thiago Alvarez have been experiencing some unexplained phenomena in their condo. They believe there must be some logical explanation for the scratching sounds behind the walls and the cold spots in various areas of the home and the strange sounds at night. Shortly after getting Itza, a smart speaker that can do many things by voice command, they notice that more weird activities began happening, such as eerie music playing at odd hours, orders being placed and finding packages at their door, and Itza answering questions neither had asked. Is there something wrong with Itza or perhaps the condo? Before they could find the previous occupant to learn more about the home’s history, Vera is involved in a fatal accident. Thiago tries to make sense of the tragedy and the weird events happening around him; but unable to cope with his emotions he destroys Itza in a fit of frustration and moves far away to another state. But his troubles only begin as the malevolent entity that inhabited his home and making itself known via Itza follows him and feeding on his anger, guilt, and grief.

This Thing Between Us is an existential horror novel that is an iteration of a haunted object story or a possession tale yet original in its exploration of human grief and loneliness. You won’t look at your Alexa the same after reading it!

Solito: A Memoir by Javier Zamora

Reading this memoir I’m reminded of a book I read many years ago by Oscar Martinez titled The Beast: Riding the Rails and Dodging Narcos on the Migrant Trail. It’s about migrants from Central America risking their lives to find work up north. The journey is a perilous one and many are murdered, raped, and kidnapped for ransom. Solito is a personal story that recounts the dangerous trek the author made from El Salvador to the United States when he was just a boy.

At 9 years old, Javier Zamora left the safety of his home in El Salvador where he lived with his grandparents to join his parents in Arizona. What was supposed to be a two-week journey turned into a two-month ordeal trekking through Guatemala, Mexico, and the U.S. border. Travelling alone among strangers and a “coyote” hired to take them to their destination, Zamora had no idea what the journey would entail. From the first-person voice of a 9-year-old boy, he recounts the dangerous boat trips, the exhausting trek through the Sonoran Desert, being held at gun point, and the deceptions by people who were supposed to help him. Yet he also describes the kindness of strangers and the courage and compassion of the migrants who protected him like family. Zamora ultimately unites with his parents, but the harrowing journey he made to see them had left a lasting scar on his psyche.

Solito was written in part to help Zamora heal from this childhood trauma. It is a moving memoir that will elicit sympathy and also anger. It’s a story about a courageous boy and millions of others like him who had no choice but to leave home.

When discussing notable Hispanic women authors, Isabel Allende is a name that comes up often. Born in Peru of Chilean heritage, Allende is one of the most prolific and successful writers from Latin America. She’s noted for her strong female characters in her novels, magical realism, and historical fiction.

Violeta is her latest offering that is set against the backdrop of world history beginning with the tumultuous 1920s in South America to the present time. The story is told through the letters of Violeta del Valle, who addresses them to her grandson Camilo. She recounts the story of her life to him, detailing the rise and fall of her family’s fortune, the rippling effects of the First World War and the Spanish Flu pandemic on the country, and her failed relationships interspersed with world events. She chronicles the events leading to a dictatorship that in hindsight she feels she might have passively colluded with, having amassed wealth in a country that was suffering under a cruel regime. Violeta’s life, we learn, is shaped by some of the most important world events, such as the rise and fall of dictators, world wars, the fight for women’s rights, the Great Depression, and a pandemic.

Like a number of Allende’s novels, Violeta is somewhat of a personal narrative that reveals the author’s resilience and frailty as well as her virtues and her sins. As an epistolary novel, we’re given an intimate view of the narrator’s thoughts and feelings that lends itself to a deeply emotional reading experience.

My Broken Language: A Memoir by Quiara Alegría Hudes

If you’ve seen the Broadway musical In the Heights, then you probably have heard of Quiara Alegría Hudes who wrote the book that inspired it. She’s best known for her plays and musicals, but her recent book is about her life growing up between two worlds.

Hudes grew up in a bi-cultural, bi-ethnic, and bilingual household. She is Jewish on her mother’s side and Puerto Rican on her father’s side. In writing her memoir, she looks back to her childhood growing up in Philadelphia’s multicultural neighborhoods and recalls the many stories she heard from family members both in Spanish and English. She finds inspiration in their myths and legends, in their achievements and failures, and in the conglomerate of cultures and languages within her own family.

My Broken Language has a musical quality to it and reads like many of her plays. That shouldn’t be surprising since Hudes is a composer by training. Her memoir is a collage of many stories inspired by music, languages, and memories. It’s about forging her own identity and finding her language in which to share her own story.