On July 31st sixty years ago, the San Rafael Branch opened its doors on the corner of Nithsdale Road and Avenue 64 to a crowd of excited residents and city officials. Opening a new library is always a special occasion, but this grand opening was particularly significant in that it almost didn’t happen because of opposition to where it was to be built. It wasn’t because the San Rafael community didn’t want a library but rather that a group of residents didn’t want one in their back yard, so to speak.

It all started in 1951 when the City Board of Directors approved the construction of a branch library in the San Rafael community. The City chose the property on Nithsdale Road and Avenue 64 as the ideal location, but residents in that area opposed a library in their neighborhood, claiming that it would lower property value and increase traffic in the area and make it unsafe for children walking to school.

A long legal dispute between the City and a group of residents delayed planning of the San Rafael Branch, with the homeowners pooling their own money to buy the lot on which the branch would be built and the City filing a condemnation suit in return to acquire it through eminent domain. When the Pasadena Superior Court made a decision to allow the City to buy the lot for $2,250 cheaper than what the residents had originally paid, the residents filed an appeal and the dispute dragged on for many months.

The matter was finally resolved in June 1954 when the courts upheld a judgement in favor of the City. It was not until early 1956 that plans for the new branch were approved and construction began.

On July 31, 1957, the San Rafael Branch was open for business. Its completion fulfilled Library Director Doris Hoit’s vision of bringing library services to the southwest section of Pasadena, which hitherto had been completely cut off from library service. 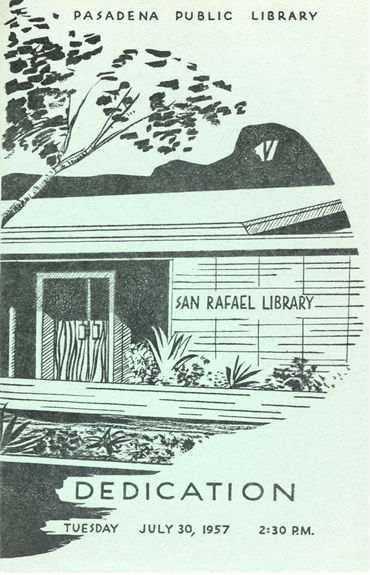 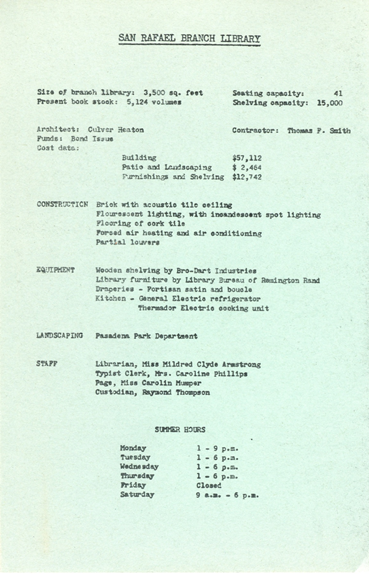