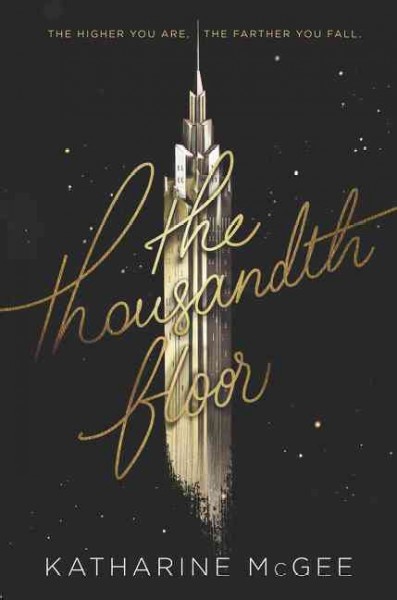 The Thousandth Floor by Katharine McGee

Summary: A thousand-story tower stretching into the sky. A glittering vision of the future where anything is possible—if you want it enough. WELCOME TO MANHATTAN, 2118. A hundred years in the future, New York is a city of innovation and dreams. Everyone there wants something…and everyone has something to lose. LEDA COLE’s flawless exterior belies a secret addiction—to a drug she never should have tried and a boy she never should have touched. ERIS DODD-RADSON’s beautiful, carefree life falls to pieces when a heartbreaking betrayal tears her family apart. RYLIN MYERS’s job on one of the highest floors sweeps her into a world—and a romance—she never imagined…but will this new life cost Rylin her old one? WATT BAKRADI is a tech genius with a secret: he knows everything about everyone. But when he’s hired to spy for an upper-floor girl, he finds himself caught up in a complicated web of lies. And living above everyone else on the thousandth floor is AVERY FULLER, the girl genetically designed to be perfect. The girl who seems to have it all—yet is tormented by the one thing she can never have. Amid breathtaking advancement and high-tech luxury, five teenagers struggle to find their place at the top of the world. But when you’re this high up, there’s nowhere to go but down…. – Goodreads

All in all, The Thousandth Floor by Katharine McGee was definitely not one of the book club’s favorites. One of the attendees stated, “THIS is the book I can use to backup the fact that there are so many problems with the YA genre!” The plot isn’t original, and the majority of the characters are stereotypes. They are completely blunt, which makes some of them borderline offensive. The novel just had so much wasted potential. It was somewhat evident to all of us that the author had tried to make the novel new, thrilling, and diverse, yet it was hard to keep that mentality when we all, rather painfully, dragged through the book page by page. While the novel did showcase multiple characters of color and a queer couple, their portrayals were poorly done. It seemed to all of us that all characters of color remained struggling in the lower class while the upper class was completely made up of shining, beautiful, nearly flawless white characters. The author caricatured the queer couple, diminishing them into demeaning stereotypes. The only thing that could justify this novel’s failed attempt at portraying minorities is the fact that the majority of the characters weren’t well written, two-dimensional in fact. The novel desperately depended so heavily on both the characters and the plot to make the story come together decently, that when either the characters or the plot was looked at alone, it was subpar. Like I said before, this novel had a lot of wasted potential, especially considering how much more bearable the barely original plot would have been if unique, three-dimensional characters were implemented. The book club’s overall rating was approximately a 1.75 out of 5.

Find this book in our catalog: The Thousandth Floor