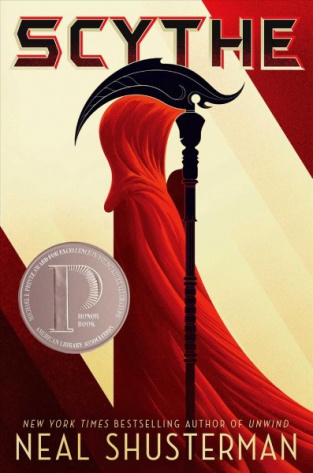 Summary: “In a world where disease has been eliminated, the only way to die is to be randomly killed (‘gleaned’) by professional reapers (‘scythes’). Two teens must compete with each other to become a scythe–a position neither of them wants. The one who becomes a scythe must kill the one who doesn’t”– Provided by publisher.

A world with no hunger, no disease, no war, no misery. Humanity has conquered all those things, and has even conquered death. Now scythes are the only ones who can end life—and they are commanded to do so, in order to keep the size of the population under control.

Citra and Rowan are chosen to apprentice to a scythe—a role that neither wants. These teens must master the “art” of taking life, knowing that the consequence of failure could mean losing their own.

Scythe by Neal Shusterman, the first in the Arc of a Scythe Series, was read by the library’s YA Book Club in March. Scythe deals with the ideas of violence, morality, humanity and death. Due to Scythe being a part of a series, it left members of the book club with questions about what would happen to the characters. Everyone agreed it was worth reading. The plot of the story was original compared to previous book club books. It was well written and the story line was easy to follow along with. It caused us to look at our world in comparison to that of Scythes and see similarities to our world, such as the idea of being corrupted by power and just generally how the teenage protagonists were portrayed. Overall, everyone agreed that it was not a realistic book due to the lack of morality. The world of Scythe is significantly worse than ours today. Most of the book club did not like the idea of people having control over others and the right to kill, and brought up the idea of “What does it mean to be innocent?” and “What gives one person the right to kill another?”

The book club enjoyed some scythes and despised the others. There were noticeably bad scythes. We didn’t know who was good or bad due to the lack of morals. But, we did manage to note that the favored scythes were Curie and Faraday.

There wasn’t much favoritism towards the two protagonists, Rowan and Citra. The only complaint was that their relationship did not fit well with the rest of the story and appeared to have only been added for conflict and that was somewhat cliché. There were some members who did enjoy the pair and had found it to be an addition that was enjoyable to read. The majority of the book club did agree that they are planning to read the rest of the series, the overall rating was 4.1 out of 5.  If you enjoyed Scythe, some recommended books are The Hunger Games, Crowns Game, and The Shadow & Bone Series.

Find this book in our catalog: Scythe