In Geronimo Stilton’s tenth novel, All Because of a Cup of Coffee, he describes the way he fell head over paws for a lady mouse named Stephanie von Sugarfur, a countess who isn’t interested in his displays of affection for her nor his over-the-top gifts. It is after he finally gets her attention that he decides he no longer wants it, and has moved on to bigger and more important quests. This was the book we read this month and answered questions for today in Lucha Libros. 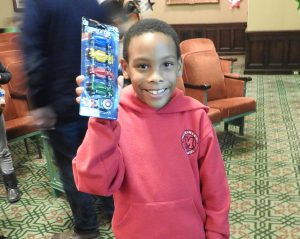 For the kids, I think their favorite part of Lucha Libros is the prizes and the promise of getting rewarded for their good memories of the books, but for me, my favorite part is our discussions! It was really fun hearing how all these seven and eight year-olds described the woes of our lovesick mouse hero! Here are two children who I was able to get on video discussing their thoughts about what was going on in Geronimo’s head. They demonstrate a readiness to go deeper than just a memory of events, and explore some of the meanings in the book, as well as the way Geronimo’s character develops.

What other meanings could be discussed in this book? If your child has read the book, perhaps it can prompt a discussion of the nature of real love, or the benefits and drawbacks of giving gifts as a way to make people like you.

One of the other kids, not captured on video, hinted at an understanding of that in the book when she said, “Geronimo gave Stephanie all kinds of stuff, and she didn’t even return his calls! So that’s why he didn’t like her anymore.” We talked about how he probably stopped liking her because he realized she had never even said “Thank You” for everything he had given to her.

Speaking of which, I want to give a big THANK YOU to all the kids and parents and siblings who come to these events every month, and THANK YOU to my amazing staff helpers and kid helpers!