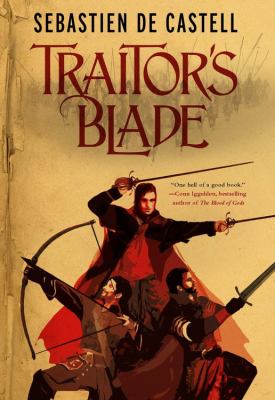 The Greatcoats were once a respected force for the justice of the King in a world ruled mostly by the whims of capricious dukes, but when the Greatcoats inexplicably stepped aside and let the dukes murder their king, they became known everywhere as traitors. Now Falcio, once the leader of the Greatcoats and close friends with the King, and his two friends are trying to survive as mercenaries, though most people are reluctant to hire Greatcoats for honest work. When they are taken on as guards for the caravan of a mysterious lady, Falcio is suddenly thrust back into the treacherous political world of the cruel dukes who have broken apart the kingdom. As the dukes vie for power with plans within plans, Falcio offers his protection to a young girl whose family has been murdered by a duke. As the schemes that surround his employer and the girl under his protection begin to emerge, Falcio must choose who to trust and ultimately, what he believes in and is willing to fight for.

Traitor’s Blade is an exciting tale full of swashbuckling action, conflicted and well-rounded characters, and plot twists that affect not just the action, but also the hero and the way that he sees the world. Falcio is a wonderfully likeable protagonist, a man deeply flawed and angry about the past, but one who is still trying to do the right thing under terrible circumstances. The world that de Castell has created is easy to get immersed in, but as he reveals more through the course of the book, the moral and political complexities of the history of the country and the characters become deeper. The political situation is interesting and explained well through the action, rather than an info-dump, the action is swashbucklingly awesome, and the characters are confused and flawed, but ultimately so so cool. Traitor’s Blade is highly recommended for fans of swords without sorcery fantasy and captivating heroes.