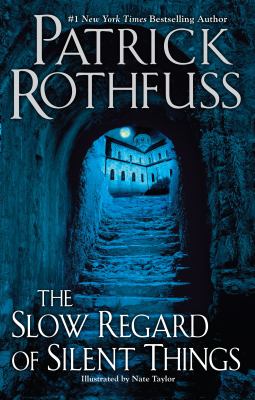 The Slow Regard of Silent Things by Patrick Rothfuss

This is an excellent book which is not for everyone. The author freely admits that, but not until the end notes, by which time the reader may have already formed an opinion about the book. The endnotes are unlikely to change your opinion, if so.

I say “book” rather than “story” because Rothfuss admits that it isn’t exactly a story. In reality, it’s a 150-page character study, about a single character from his Kingkiller Chronicles series, and a very odd character at that. Auri’s appearances in the other books are always a bit surreal, but in this book we see the world through her eyes. In a world as real as ours, there would be no room for Auri, and we would diagnose her, click our tongues, and put her away somewhere out of sight. In her own world, though, she’s perfectly fine. We would be quite out of place in her world, where inanimate objects tell her their names and where they should be.

To give you an idea what kind of book this is, there is an eight page interlude about making soap, just because soap has become very important to Auri at that moment. When you come to such passages, the kind of person who will not like this book will want to skip over the section and get back to the story. That would be a mistake, because there is nothing in this story which does not belong, even the seeming digressions.

Another strange thing is the format, which includes no dialogue. If it were in graphic form, there might be thought balloons coming from Auri, and at times from various parts of her surroundings. Being privy to thoughts which have their own internal logic but no external frame is disconcerting, rather like riding a roller coaster with your eyes closed. Deal with it. It’s worth the stress of the ride. Or maybe it’s not. If not, just consider this to be a distraction that Patrick Rothfuss threw to the rabid fans chasing his carriage through the wilderness, while he frantically writes the next actual story in his saga.